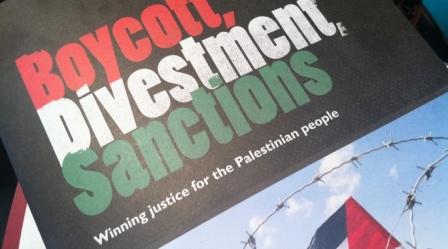 ISRAELI spies have been ordered to dig up intelligence showing that supporters of an economic boycott are linked to terrorists and enemy states.

The strategy was presented at a ministerial meeting called to discuss how to respond to the growing number of foreign companies refusing to do business with Israeli entities operating in Jewish settlements in the occupied West Bank. They are considered illegal under international law.

At the meeting Yuval Steinitz, the Minister for Intelligence and Strategy, outlined a plan for a media blitz against organisations advocating boycotts. His strategy includes intelligence agencies working to expose “their connection to terror organisations and enemy states”, the Hebrew-language newspaper Yedioth Ahronoth reported.

Oxfam was accused of promoting an anti-Israeli boycott last month when it parted company with Scarlett Johansson, the Hollywood star, over her promotional work for Sodastream. The Israeli company manufactures products in a West Bank settlement. Oxfam insisted that it did not support a total economic boycott of Israel, but merely opposed trade with the settlements.

Britain also opposes a boycott, but continues to regard the settlements as illegal and not part of the state of Israel.

Brussels is to issue new rules requiring the separate labelling of Israeli goods produced in the West Bank, to allow consumers to make more informed choices.

A coalition of leading pro-peace Israeli and Palestinian business people, including Meir Brand, the CEO of Google Israel, warned last month that Israel’s economic growth would suffer if an agreement was not reached to end the West Bank occupation. “The world is beginning to lose its patience and the threat of sanctions is becoming more imminent,” the group said.

The issue of how to combat the boycott threat has divided the Israeli Government. Yair Lapid, the Finance Minister, and Tzipi Livni, the Justice Minister and chief negotiator, both leading moderates, were pointedly excluded from Sunday’s meeting despite their direct connections to the boycott issue.