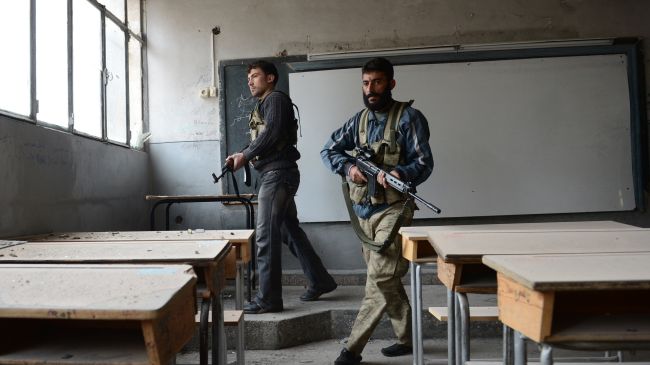 The titular head of al-Qaeda, Ayman al-Zawahiri, has reportedly disavowed the Islamic State of Iraq and Syria (ISIS). Videos emerged over the weekend of the Egyptian-born leader denying any organizational links with the ISIS.

The British Guardian reported that the move by the top al-Qaeda commander was an attempt to “reassert control” over the disparate militant groups fighting in Syria.

Later in the same report, the newspaper inadvertently hinted at the real motive for the initiative. “The internecine fighting – among the bloodiest in the three-year conflict – has undermined the uprising against President Bashar al-Assad and dismayed western powers pushing for peace talks,” reported the Guardian.

By “uprising,” the Guardian is euphemistically referring to the covert criminal war sponsored by the West against the Syrian government and its people. This is not an uprising or civil war; it is Western state-sponsored terrorism for regime change using foreign mercenaries of varying affiliation to al-Qaeda – the latter itself being historically a Western, Saudi intelligence creation from the late 1970s onwards.

The political problem for the West is that it cannot be seen to be overtly supporting the al-Qaeda brigades. That would very publicly destroy the last vestiges of the so-called War on Terror and 9/11 propaganda myth.

Previously, Washington and its allies have got around that contradiction by claiming that they have been supporting “moderate rebels” in Syria as opposed to the backbone of foreign mercenaries belonging to al-Qaeda. That sleight of hand ran into terminal problems when the “moderates” of the so-called Free Syrian Army were decisively pushed out of the picture at the end of last year by the “extremists.”

Now that there are no “moderates” fighting in Syria to talk of, even in a fictional sense, that presents the Western state terror sponsors with a very awkward conundrum.

How can Washington and its allies even begin to justify to their public sending weapons to al-Qaeda terrorists? That conundrum was highlighted with reports last week of the US Congress secretly voting to step up its munitions supply to Syria.

The reality that has been extant for the last three years, but which has been made latent by the Western media myth of “moderate rebels,” stands exposed. Western weapons are being funneled to terrorists in Syria, and not just any terrorist, but the supposed arch-terrorist enemy – al-Qaeda. Even the mercurial Western media cannot conceal that appalling reality. Something must be done to cover up the abominable truth.

This would explain the latest move by al-Qaeda chief al-Zawahiri trying to furnish the illusion that there is a distinction between the ISIS and the other al-Qaeda-affiliated militants of Jabhat al-Nusra and those comprising the Saudi-backed Islamic Front.

The ISIS has certainly emerged in recent months as a particularly barbaric brigade. One of its operatives reportedly killed 16 other militants in a bomb attack in Aleppo at the weekend. A video also emerged of ISIS fighters decapitating a man amid cheering crowds as the victim’s head was held aloft. It is also running amok in Iraq, killing dozens of civilians on a daily basis.

It would thus appear that the al-Qaeda command is moving to distance itself from the ISIS group, not for any ideological reason to be sure, but simply from a public relations point of view.

Now that the moderate/extremist dichotomy in Syria is a redundant falsehood, is the Western public being conditioned via the Western media to accept a new narrative of “bad al-Qaeda/good al-Qaeda” or at least an al-Qaeda segment that the West can sort of support?

This incredible mental gymnastic is of course somersaulting right off the floor of common intelligence. Only the most propagandized minds of warmongering politicians and their dutiful Western “news” media could entertain such doublethink nonsense.

But the interesting and telling point is where this initiative is ultimately coming from and why?

Jabhat al-Nusra – the soon-to-be presumed al-Qaeda “nice guys” – is the same group that has committed dozens of no-warning bomb attacks on civilians across Syria and Lebanon – the latest atrocity only days ago killing four in Hermel, east Lebanon.

Al-Nusra is the same group that was involved in the chemical weapons mass killing in east Ghouta, Damascus, last August, which resulted in hundreds of deaths, including women and children, and which the Western governments and their media tried to blame on the Syrian army, nearly resulting in an all-out American military attack on the country.

In the Syrian industrial city of Adra earlier this year, al-Nusra committed a massacre of more than 80 civilians, beheading many and even throwing workers at a bakery into the ovens.

One of the commanders of al-Nusra, Khalid al-Hamad (also known as Abu Sakkar) was the notorious cannibal who filmed himself cutting out the organs of a captured Syrian soldier and eating them.

Al-Nusra is a terrorist al-Qaeda group just as the ISIS is and the myriad other brigades with names like Shams al-Ahrar and so-called Islam al-Tawhid. They are all sponsored by Saudi Arabia and Qatar, share the same extremist Wahhabi cult religion, and they are all supported militarily by Washington and its allies, including Britain, France, Turkey, Jordan and Israel.

This spotlights who Ayman al-Zawahiri is really working for. The elusive, phantom-leader proclaims to have taken over al-Qaeda command following the alleged assassination of Osama bin Laden by US Special Forces in May 2011. How can Zawahiri make such a claim when it is credibly documented that Bin Laden died at least 10 years ago from natural causes and that his assassination in Abbottabad, Pakistan, was an American propaganda stunt?

Zawahiri’s latest public disowning of the ISIS in Syria suggests that the “initiative” is Washington-inspired in a bid to give itself a license to further weaponize its al-Qaeda foot soldiers in Syria. True to its origins as a Western intelligence asset, al-Qaeda is helping to create an illusion in Syria that will enable US weapons supply to the militants in that country to continue. Even though the stark reality is that Washington and its allies are – and always have been – on the side of out-and-out terrorists of varying stripes. Indeed, Washington and its allies are the terrorists-in-chief.

Finian Cunningham (born 1963) has written extensively on international affairs, with articles published in several languages. He is a Master’s graduate in Agricultural Chemistry and worked as a scientific editor for the Royal Society of Chemistry, Cambridge, England, before pursuing a career in journalism. He is also a musician and songwriter. For nearly 20 years, he worked as an editor and writer in major news media organisations, including The Mirror, Irish Times and Independent.