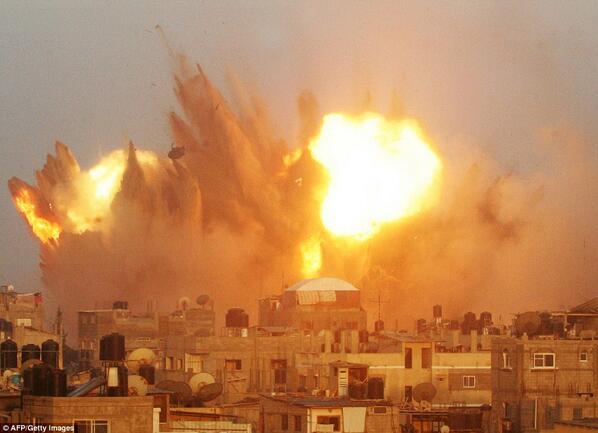 As world powers watch the slaughter of Gaza’s besieged population in deathly silence, ordinary people are shocked at the levels of barbarity displayed by Israel.

Gruesome and grotesque to the extreme. Visuals in mainstream media of entire families including little babies being blown to pieces, cannot but move viewers. Their sense of outrage will most certainly have been fueled by being aware that tons of explosives raining down on homes, hospitals, schools and mosques can be halted if world leaders have the guts to pull the rug below Netanyahu’s feet.

However the likelihood of the Obamas and Camerons reading the riot act is as remote as Israel voluntarily conceding that its policies against the Palestinians, is responsible for the crisis. The reluctance on the part of Western leaders to rein in Israel’s murderous leaders is fortunately not shared by their citizenry. Reports indicate that protest meetings directed against Israel’s carpet bombing of Gaza, have and are being held across Europe as well as America.

The mood at these public rallies is in sharp contrast to the lame excuses offered by sitting governments. To illustrate how sharply pointed these views are, this is what South Africa’s well known human rights activist Breyten Breytenbach is quoted to have said: “Israel’s smothering of Palestinians by killing, theft, expropriation, occupation, incarceration, torture and terror – is the defining international issue morally and politically of our times”.

It gets more pointed if well-known radio host, columnist and political analyst Eusebius McKaiser’s tweet is considered: “Actually the analogy between apartheid South Africa and Israel is not accurate. Israel is worse. The Nats didn’t rain bombs on us”.

Undoubtedly the disconnect between states who remain muted and their populations who are agitating for action beyond rhetoric is quite revealing. Apart from confirming that many of these states are out of touch with the expectation held by their people, it also sounds absurd that western democracies lack the ability to comply with legitimate aspirations and demands of people.

Yet as Breytenbach emphatically positions Israel/Palestine at the centre of global politics, what informs others who may recognize this truism but behave differently? Is it due to what key analysts refer to as the “power of pro-Israel lobbies”? If so how is this “power” defined and what does it gravitate towards?

Though the well-known lobby in America, AIPAC, has a notorious reputation to induce fear amongst Senators and law-makers who dare not stray from a pro-Israel stance, the same cannot be said about South Africa. Many wannabee organisations allied to Israel dream about being the equivalent of AIPAC. The rivalry amongst them and that South Africa’s political terrain is distinctly different to that of America, may be contributory factors for their weakness. Despite this and other weaknesses, these self-styled lobby operations claim to have the “ear” of the Zuma administration and flex their economic muscle by threatening and cajoling media and political formations alike.

The current fiasco playing out is the childish, foolish and emotional attack by SA Chief Rabbi on Mandela’s ANC and in particular its deputy secretary general Jessie Duarte. It arises from the ANC’s statement condemning Israel’s actions. The folly I refer to is that instead of personalizing his intemperate attack on Duarte, he ought to have addressed the key causes that she correctly cites.

What this demonstrates is that Israel’s merciless savagery will exact a huge cost. Even if they depend on highly resourced and skilled propagandists known as Israel’s Hasbara, they cannot predict the reaction from media, politicians and civil society and thus remain helpless if chaps like the Chief Rabbi lose their marbles.

Such failure by Israel in winning hearts and minds is cryptically observed by a medical volunteer from Europe stationed at a Gaza hospital. Interviewed by Sky TV he complained about how the “abnormal is being accepted as normal”.

Failure to rally public support behind a systematic bloodbath was a given from the outset. That Netanyahu and his clique of warmongers didn’t factor this is absolutely mind-boggling. Did they really expect sympathy for their disproportionate bloody collective punishment from people around the world who have had to endure gory images of battered bodies splashed repeatedly across TV broadcasts?

Also more importantly, at the military level too, there is the likelihood of abject failure to realize any of Israel’s stated goals. Reminiscent of previous military adventures in Gaza and Lebanon, Netanyahu’s ranting and raving will leave him weaker than before he authorized the unleashing of tons of deadly explosives. Indeed talks of accepting a ceasefire brokered by Egypt means that the war cabinet will be forced to eat humble pie.

On the contrary, Hamas which in recent days especially following Egypt’s military coup had been perceived to be isolated and vulnerable, will emerge victorious and confident enough to place firm conditions for a ceasefire. That its resistance has been able to retaliate by firing rockets of varying quality deeper into Israel on a sustained daily basis despite the siege and pounding of missiles, will certainly reposition the movement as a key defender of Palestinian rights.

One of the most significant consequences of Israel’s savage aggression is the fact that the Palestinian quest for freedom and justice is being embraced and actively supported by a wider global audience. Never before have such large numbers of people taken to social media to commit themselves to overcome Israeli repression. Their vehicle of choice remains Boycott, Divestment and Sanctions – peaceful and effective.