MRN saddened at passing of one of Africa’s intellectual giants: Ali Mazrui (1933-2014) 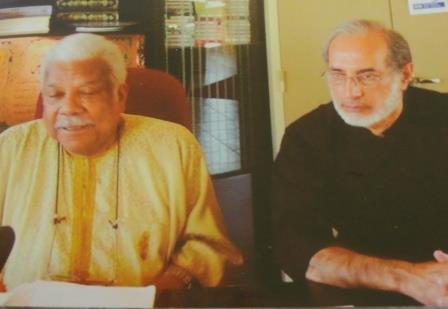 Ali A Mazrui debating the African condition
An annotated and select thematic bibliography, 1962-2003

A year ago, in a citation on Ali A Mazrui’s nomination as 100  Greatest Africans of all times by New African Magazine he is profiled as representing a positive image of Africa and its people.

A month ago Mazrui was yet again nominated as one of the top 100 public intellectuals in the world. The honour this time was bestowed by an American journal Foreign Policy, published by the Carnegie Endowment.

Who is this man about whom the late Palestinian academic Edward Said observed in his classic Culture and Imperialism: “Here at last was an African on prime-time television, in the West, daring to accuse the West of what it had done, thus reopening a file considered closed.”?

He is undoubtedly a Global African and as this continent’s most respected contemporary scholar of repute is widely acclaimed as its foremost thinker and writer.

Hence full credit to Abdul Samed Bemath for his painstaking efforts to compile a comprehensive annotated bibliography of the works of this remarkable scholar.  An accomplished Bibliographer, Bemath is highly respected and regularly consulted by academics, students, journalists and Research Institutes for literature and bibliographical searches.

His current compilation The Mazruiana Collection Revisited is a revised edition of an earlier bibliography which covered the period 1962-1997.This remarkable update is an expanded edition up to 2003 and consists of 650 entries.

These are divided into five sections which are appropriately divided into books, pamphlets, major academic papers, magazine articles and broadcasts.

Truly a labour of love, Bemath’s contribution, in the words of Charles Armour in the Journal of Modern African Studies, has ensured that  “……future Africanist historiographers will find this collection most valuable, not least in following up the cited reviews of Ali Mazrui’s publications and exploring the controversies they provoked.”

It has also been described as a monumental work of diligence by Michael Holman of the Financial Times, London. This is particularly true for the annotations are detailed and each section has a keyword index. In addition, Bemath has also provided a separate authors’ and subjects’ index which makes for easy reference.

Another remarkable source of great value is the section headed “Select Thematic Bibliography” wherein Bemath excels in capturing a number of Mazrui’s major themes. These centre on “Petro-power”; the debate on “Nuclear Proliferation and Global Disarmament” ; “Globalisation”; “Afro-Gender”; “Language, Literature and Governance” and the “Clash of Civilisations” debate.

The Mazruiana would be incomplete without a peek into what others may have written or covered about this intellectual giant. Bemath thus does a great service to his compilation by including a section providing valuable input in this regard.

Mazrui, who is 72 is famously known for his award winning television series The Africans, [BBC & PBS 1986], and is currently Albert Schweitzer Professor in the Humanities at the State University of New York [SUNY] at Binghamton and Director of its Institute of Global Cultural Studies [IGCS].

Belonging to the generation that lived through World War 2, the Korean War, the war in Vietnam, the different Gulf Wars and multiple regional conflicts in Africa, the Middle East and elsewhere, Mazrui continues to research, write and lecture at a pace unmatched by his peers.