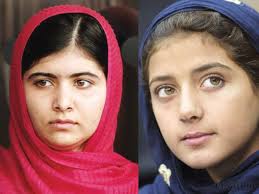 The Nobel Peace Prize was awarded to Malala Yousafzai,  the 17-year-old Pakistani girl who was shot and wounded with two of her friends by the Taliban in Pakistan’s Swat Valley on October 12, 2012.

Ten days after Malala was shot, Nabila Rehman , a nine-year-old Pakistani girl in Pakistan’s North Waziristan tribal region, was badly wounded in a US drone strike on October 24, 2012. Her 68-year-old grandmother, Mamana Bibi was blown to pieces by two Hellfire missiles.

Nabila and her injured brothers and sisters  were treated at a poorly equipped local hospital, whilst Malala, following initial treatment at the Combined Military Hospital in Rawalpindi,was flown to the Queen Elizabeth Hospital in Birmingham, England for reconstructive surgery.

The girls were injured within two weeks of each other but the world knows a great deal about Malala and virtually nothing about Nabila. Why? Is Nabila less worthy of attention and sympathy than Malala?

Malala was showered with international awards, nominated for the Nobel Peace Prize in 2013.  She was feted by  Hollywood celebrities Angelina Jolie and Madonna, and published  a 276-page book titled, I am Malala.

It was only a matter of time before Malala Yousufzai would get the Nobel peace prize. She met international political heavyweights such as UN Secretary General Ban Ki moon, former British Prime Minister Gordon Brown,former US Secretary of State Hillary Clinton, President Barack Obama in the White House and the British monarch, Queen Elizabeth II.

How many 16-year-old girls would get such accolades and honors anywhere in the world much less one born in the backwaters of Pakistan’s Swat Valley?

Malala’s campaign for girls’ education is admirable, but her promotion by the West stands in sharp contrast with the treatment of thousands of other Pakistani girls and boys that have suffered much worse fate, like Nabila.

Sceptics view Malala, currently studying in Birmingham, England, as a Western agent whose plight is being exploited to advance the West’s agenda.Two other girls shot and wounded with her—Shazia Ramzan and Kainat Riaz—have received scant attention, reinforcing the belief that she is being used for purposes other than the advancement of girl’s education.

There is also widespread belief among Pakistanis that her father, Ziauddin, a lowly schoolteacher, is using his daughter to promote his own for-profit schools of which he has now established a vast network.

The prestigious Nobel Peace prize, named after the Swedish industrialist Alfred Nobel, the inventor of explosives, has courted controversy awarding the prize based on political considerations.

Some of the past recipients have included indicted war criminals such as Henry Kissinger, Menachem Begin, Yitzhak Rabin and Shimon Peres. Apartheid South Africa’s  former president F W de Klerk was a joint winner as well, and Barack Obama, barely a month into his Presidency, was awarded the Prize.

Among Muslims who have received the award are Egypt’s Anwar Sadat and Iran’s Shirin Ebadi, considered by critics as a reward for being a good servant of the West in general, and of the US in particular. Activists fighting for justice in despotic Muslim countries aligned to the West, or even the brave souls exposing Western crimes such as Edward Snowden and Bradley Manning are regarded as traitors and terrorists.

It is impossible not to sympathize with Malala, a young girl with large beautiful hazel eyes peering from her innocent face, and her naturally distraught parents. It is shocking that a young girl would be targeted for simply wanting to go to school to acquire education, which is her birthright as it is of millions of other young girls in Pakistan as indeed elsewhere in the world.

But it was malicious to expose to Malala to danger detailing her life under Taliban rule on the BBC World Service Service  website under the title, “The Diary of a Pakistani School Girl.” In order to protect her identity, Malala was given the pseudonym “Gul Makai” (corn flower). The diary detailed Malala’s life under Taliban rule, their attempts to take control of the valley, and her views on promoting education for girls.

Experts have opined that her interviews on television were powerful and direct, even being blunt and provocative. It seemed as if the young Malala was deliberately being pushed to say things to provoke the Taliban. In one TV interview she said “In a situation where a lifelong school break was being imposed upon us by the terrorists, rising up against that became very important, essential.”

Without condoning the Taliban’s horrendous act of shooting Malala, surely those responsible for placing her in the front line should bear some responsibility as well. It would be unfortunate  if Nobel Laureate Malala Yusufzai’s is being used as a political tool to further the Western criminal enterprise.