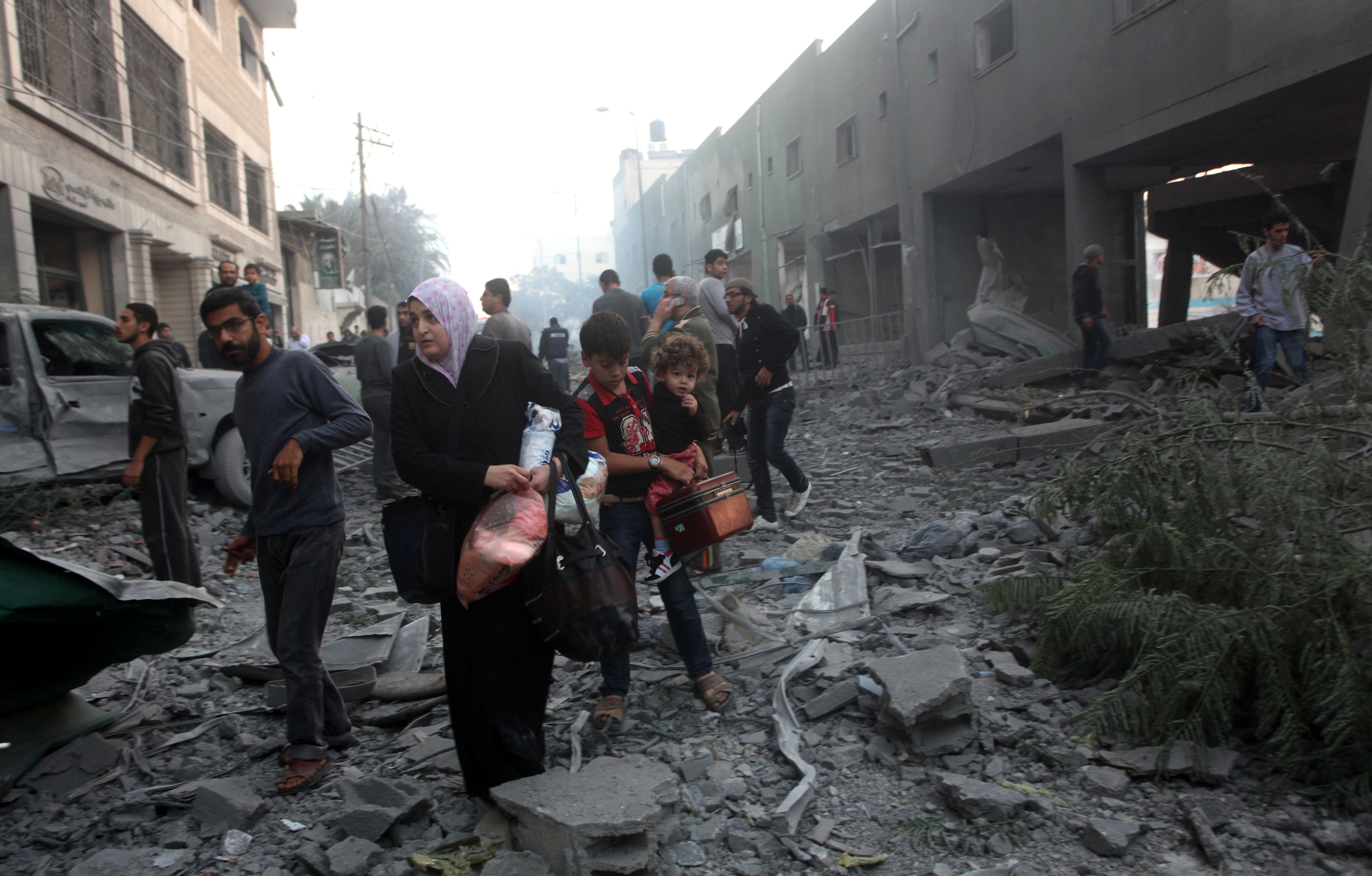 Psychiatrist Samah Jabr has witnessed first-hand the psychological impacts of Israel’s war on Gaza. For true healing, Palestinians need much more than a ceasefire, she argues.

Israel’s war against the Gaza Strip between 7 July and 25 August caused, reports say, 2,133 deaths (including 577 children) and over 11,000 injuries. Many thousands were left with lifelong disabilities, tens of thousands of homes were destroyed, and hundreds of thousands of people were left homeless.

But such reports are just the tip of an iceberg of a much more profound long-term effect on the mental health of the population and the wellbeing of society. The psychosocial damage that has resulted and will persist is unseen, unarticulated and immeasurable.

Consider the Palestinian-American mother who had to choose between fleeing Gaza with two of her children (who possessed US citizen­ship) while leaving behind the two who did not; or remaining in Gaza under bombardment with all four of her children. Psychological damage is also reflected in the questions of children who ask their parents: ‘Why do children in Gaza die?’ ‘What happens to them after they die?’ ‘Will you be sad if I die, too?’ Such are the experiences of families instructed to evacuate their homes, with their past and their future reduced to dust. Statistics cannot capture the chronic traumatic grief felt by those grieving the loss of loved ones in such horrific circumstances, nor the emotional suffering borne by those for whom the bereavement process cannot take its natural course.
Haunted

Mariam lost her little sister years ago, when soldiers shot at the family’s car on the way to school. Even now, every time Mariam encounters a soldier, she relives the shooting and the bitter taste of loss. She is stuck with that traumatic memory, and it is taking over her life.

The impact of war on the mental health of the civilian population is one of its most significant and persistent consequences. Universally, scientific studies have documented an increase in mental disorders following war. Women, children, the elderly and those living with disabilities are the most vulnerable to its effects; the degree of trauma and the availability of physical and emotional support also affect the outcome.

In Palestine today, there is disappointment but not bitterness at a world whose ignorance and moral numbness has permitted so much cruelty

Faced with the immediate atrocity of war, people commonly experience a state of hyper-arousal in which they feel capable of fighting against or fleeing from danger; but they can also feel frozen in a state of helplessness. In years to come, they may be haunted by memories, nightmares and flashbacks of traumatic events.

Accidental mis­fortunes and natural disasters are also tragic, but they are impersonal; the horrors of war are deeply personal. Traumatic injuries inflicted in war cause particularly deep damage because they represent deliberate and preventable malice. The feelings evoked, the sense of helplessness and impotent rage, are more painful. An earthquake does not ‘triumph’, but in war one party aims to triumph over and humiliate the other. The losses experienced are thus especially bitter and shameful. In the case of Gaza, the proximity of the perpetrator is a constant reminder of the past and an ongoing threat for the future.

Gaza is one of the most densely populated areas on earth, a place whose civilians have been living under occupation and siege for decades, with very high rates of imposed unemployment and poverty. Its civilian population lacks access to its own airspace, land, waterways, sanitation facilities, roads and boundaries; and has been forcibly isolated from Palestinians in the West Bank and East Jerusalem, separating families and precluding economic, social and political growth.

It is because Gaza, and all of Palestine, has been continuously dominated by a vastly stronger military force that has controlled all aspects of life for generations that the life of its civilians cannot be normalized by a mere ceasefire. The war that makes global news is superimposed on a severe, chronic, traumatic deprivation that is no longer news. Palestinians need relief from bombing, but they also need the restitution of lost rights and for underlying wrongs to be addressed. Otherwise there is a risk that the ongoing violence will beget an unending spiral of victimhood and revenge, of polarization and mythology, and of further trans-generational trauma.
Grief but not despair

So how do Palestinians cope? A young boy from Gaza, in a Jerusalem hospital following a blast injury that left him with a gangrenous foot, said: ‘If Allah saves my leg from amputation, when I get older, I’ll rebuild our house that was demolished. My situation is better than others: two of my classmates are dead. When I go back to Gaza, I will pay condolence to their families.’

Cultural and spiritual coping strategies are very important for this nation. Despite continuing community erosion through relentless military, political, economic, social, ideological and psychological oppression, mental-health problems are not as widespread as might be expected.

I have listened to hundreds of people interviewed just as they begin to understand the immense destruction of war and its impact on their lives. I have provided treatment to injured Gazans admitted to hospitals in Jerusalem and the West Bank. Their most frequent reaction is ‘Allah is sufficient for us and He is the best disposer of affairs’. Betrayed by the ‘international community’, these people have placed their trust in a power that they believe to be higher than that of Israel, the UN, and the US government. Their profound faith is stronger than the smart missiles of Israel and the psychological treatment meted out by professionals. In Palestine today, there is grief but not despair; disappointment but not bitterness at a world whose ignorance and moral numbness has permitted so much cruelty to come our way.

The war that makes global news is superimposed on a severe, chronic, traumatic deprivation that is no longer news

Despite the horrendous destruction and loss in Gaza, there are many ordinary people who have taken risks to help others survive: medical and civil defence personnel; journalists; families who took in the needy and dispossessed. The damage done will not dampen their morale or weaken their resolve.

Trauma treatment often focuses on techniques that help the individual recall and narrate the horrifying details of his or her experience in a safe environment. But the Palestinian reality includes not only internal ‘post’-traumatic stress but current and ongoing external traumatic stress. Traumatic events cannot be banished from consciousness when they are not banished from communal reality. Acknowledging this reality is a social process, beyond the bounds of individual psychotherapy. Thus treatment that ignores the political reality can do more harm than good. Just as the victim of a crime needs not only individual sympathy but the delivery of justice, so the Palestinian community needs to be seen; its suffering heard and acknowledged. The wrongs it has endured need to be made right. Fact finding and truth commissions, memorials and ceremonies may also help the healing process.

National unity, social cohesion and international solidarity are other potential remedies for the psychological pain and alienation caused by Israel’s relentless dehumanization of Palestinians and the resulting international apathy, denial and denunciation. Solidarity can promote healing, diminish the urge for revenge and pave the way for future reconciliation; it allows for a personal revival and for a rebuilding of society that will eventually help both Palestinians and Israelis in the post-war era.

Samah Jabr is a psychiatrist and psychotherapist in Jerusalem, who cares about the wellbeing of her  community, beyond issues of mental illness. She writes regularly on mental health in occupied Palestine.