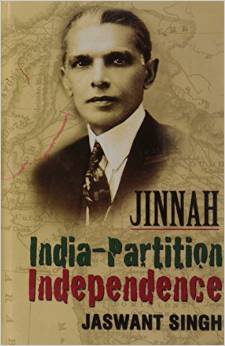 “Though the book attempts to analyze events leading to the partition, Singh delves into a series of contentious issues. His probe into the thesis of “Muslims as a separate nation” is as provocative as his questioning of the rationale for the creation of Pakistan.”

Completely unaware that the book I had purchased from a street vendor in the Kolaba suburb of Mumbai would be the subject of a huge controversy in India, I was taken aback at the ferocity of attacks against its author Jaswant Singh, as the debate on Pakistan’s founder, Muhammad Ali Jinnah took the country by storm the next day.

Newspapers ranging from the “Times of India” to the “Hindustan Times” and a whole host of television channels devoted extensive space and time to the ensuing debacle surrounding the author’s views on the partition of India. With calls for the banning of the book and demands that Singh be dismissed from his post as Chairman of the Lok Sabha’s Public Accounts Committee, the howls of outrage increased in intensity each passing day.

Jaswant Singh, the axed leader of the BJP, a Hindu nationalist movement, seemed to revel in his new-found status as India’s revisionist historian being hounded by his former party colleagues for daring to praise Jinnah in his controversial political biography of the Quaid-e-Azam.

The struggle against British colonialism of India and the subsequent division of the Indian sub-continent resulting in the creation of Pakistan as chronicled by various historians remains hotly contested given the contrasting viewpoints of competing ideologues. Not surprising therefore that Singh, a former minister responsible for the conduct of India’s foreign policy and managing the country’s defence has provoked such furious reaction including attempts to have his book banned.

As soon as the Gujarat High Court set aside the ban on it by the BJP controlled Gujarat state run by Narendra Modi, the elated publishers of the book, Rupa & Company, rushed thousands of copies through to various bookstores in the region. Singh’s account of Jinnah not only set tongues wagging; it also added a new dimension to the region’s political discourse.

Though the book attempts to analyze events leading to the partition, Singh delves into a series of contentious issues. His probe into the thesis of “Muslims as a separate nation” is as provocative as his questioning of the rationale for the creation of Pakistan.

An enquiry into Jinnah’s journey according to Singh is central to the question of why partition “robbed” the region of “peace”. Yet, after exhausting this journey from Jenabhai to Jinnah, the author remains perplexed and in his own words expresses an “inability to understand what, after all, did partition achieve?”

Singh’s effort to re-visit a painful past in the subcontinent’s heroic struggle to wrest itself free from the grip of the British Empire is brave indeed. By subjecting many revered personalities of that era such as Maulana Abul Kalam Azad, Mahatma Gandhi, Jawaharlal Nehru, Sarojini Naidu and Sardar Patel to fresh scrutiny, the author has ensured that controversy on his subject will rage on.

In one of the opinion pieces I read in the Indian Express, Seema Chishti holds the view that Singh’s book helps the BJP view of history based on its central theme that the Congress [read Nehru] were also to “blame” for the Partition. Her argument is that no one person or a group of persons were responsible for Partition: “It was a series of events and processes, channeled cleverly by a colonial power eager to take the power away from a national movement which was ensuring that the sun set on the Empire”.

After all having practiced partition to a fine art just before departing back for home, in Africa, Cyprus and in Palestine – it was a near convention to break-up former colonies and India too could not prevent the grand design from being played out there, according to Chishti.

Nevertheless, Singh’s study is saturated with emotions; and he insists that it has to be for how do you separate what Gandhi termed “vivisection” from pain, feelings and emotions?