Peace Process as Cover for Occupation 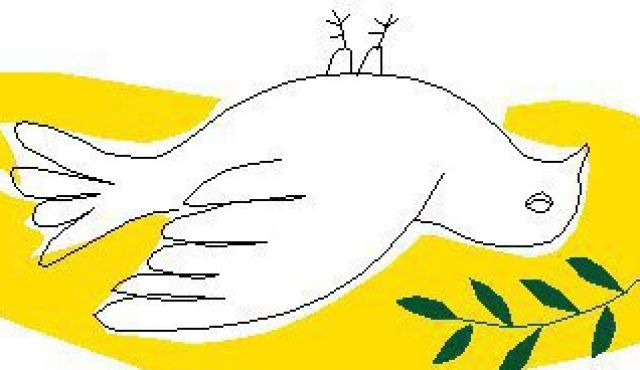 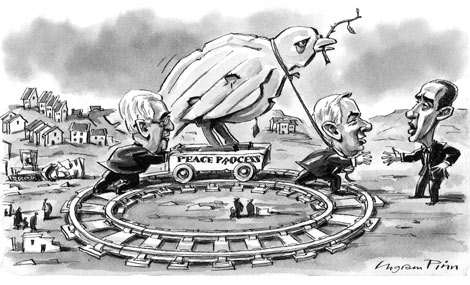 Prayer’s Road in Hebron in the West Bank stands as a metaphor for Israel’s colonial project in Palestine. Houses dating back eight centuries to the Mamluk-Ottoman period have been bulldozed to build a road linking the Israeli settlement of Kiryat Arba to the Cave of the Patriarchs and Matriarchs.

During Ramadan in 1994, a settler from Kiryat Arba massacred 29 Muslims inside the Ibrahimi mosque that houses the remains of the patriarchs and matriarchs, leading to protests and more casualties. It created a pretext for the expansion of the Israeli settlement of Hebron’s Old City.

The mosque, surrounded by fortifications manned by the Israeli Defence Forces (IDF), is now shared between Muslims and Jews. The Israelis closed down more than 520 Palestinian-owned stores in the Shuhada Street commercial centre. The livelihoods of thousands of Palestinians were destroyed.

Prayer’s Road winds its way through a Palestinian neighbourhood, but sections of it are closed to Palestinians, whether travelling by car or on foot, as are other streets.

Walking down Prayer’s Road, you see bricked-up windows, like blinded eyes. Doors are welded shut. The IDF has closed all the openings. Behind those doors, behind those walls, live Palestinian people.

In the rest of the West Bank and East Jerusalem, these conditions are repeated, making “living” a misnomer. The West Bank is a prison. With the naked eye you can trace the boundary that the mammoth concrete wall cleaves through the landscape, cutting out Palestinian villages and enclosing settlement territories. In the process, another 10% of Palestinian land was annexed to Israel.

Moving between Israel and the occupied territories for work or any other reason is, for many Palestinians, a daily struggle. It involves navigating checkpoints, military watchtowers, surveillance cameras, barbed-wire fences, no-go zones, scanners and body searches.

Adolescent soldiers brandishing automatic weapons determine your passage. Palestinians have to apply beforehand to the IDF for permits, which are routinely refused.

Everywhere you turn are towering red signs in Hebrew, Arabic and English: “This road leads to Area A under the Palestinian Authority. Entrance for Israeli citizens is forbidden, dangerous to your lives and is against the Israeli law.”

The signs are part of the propaganda war in which Israel reminds its citizens of the Arab threat (not unlike die swart gevaar). As with the tightening of the Israeli grip on Hebron, these movement-control measures were instituted after the Oslo Accords of 1993.

The evidence on the ground shows that, instead of working towards the two-state solution promised in the accords, Israel has used the peace process as a cover to expand its occupation. Since the accords were signed, settler numbers have increased from 200 000 to more than 500 000.

In the occupied Jordan Valley, coveted as a rare green space where rich agricultural pickings are possible, Israeli settlements guzzle up water and land as Palestinian people are forced to pay more for less water and are evicted from their land. Palestinians are prohibited from erecting permanent structures or expanding their villages.

In East Jerusalem, the internationally recognised future capital of Palestine, 517 Palestinian homes have been demolished in the past decade. Israeli settlers drive out Palestinians by buying homes through front organisations, occupy homes when the owners are away, or forge title deeds.

An elderly man showed us around his house, half of which has been taken over by Israeli thugs. His family is cordoned off in the back of the building.

As buildings of historical value are destroyed in Hebron, archaeological excavations are underway in East Jerusalem to “preserve history”. Only one history matters here. These excavations aim to resurrect the City of David in the Palestinian neighbourhood of Silwan – a case of politicised archaeology.

As can be seen, the security state of Israel politicises religion and history for its particular version of colonialism. The menorah, the seven-branched candleholder symbolising Judaism, is Israel’s national emblem. Occupation-as-Judaisation is manifested physically: two over-sized menorahs flank the military watchtowers on the hills overlooking Hebron.

Zionism has proved to be adaptive since the founding of Israel in 1948, with a virulent form holding sway since the 1970s. Nevertheless, the menorah in the national emblem confirms continuity. A line can be traced between 1948 and Israeli Prime Minister Benjamin Netanyahu’s recent reiteration that Palestinians not only accept the existence of Israel, as they did under the Oslo Accords, but also that they accept Israel as a “Jewish state”.

Entwined with politicised Judaism is the ever-present conjuring up of the threat of anti-Semitism. Nowhere is it captured more than in the content and shape of the Holocaust museum, Yad Vashem, in Jerusalem. Mounted on a hill named for remembrance, its stark metal-coloured concrete structure reminds one of the gigantic barrel of a cannon trained on the Judean hills.

The museum is filled with the horrors of the Holocaust. The state of Israel is represented as the only alternative.

Though the Holocaust is legitimately foregrounded as the abominable crime against humanity that it was, the narrative on offer dehistoricises the Nazis’ anti-Semitism. Dehistoricisation hides the fact that Nazism was an imperialist enterprise, albeit one focused on Europe, whereas other European states had their dominions in Africa and elsewhere, as Hannah Arendt famously argued.

Compellingly, the Yad Vashem narrative humanises Jewish people by giving names and personal histories to those whom the Nazis, using scientific racism, sought to relegate to subhuman status.

But it fails to place the Holocaust within the context of the colossal crime of dehumanisation that imperialism and colonialism perpetrated on the basis of scientific racism.

Instead, it creates what Arendt called the “fallacy” of anti-Semitism being an all-encompassing, timeless phenomenon, which can only be countered by Israel as a Jewish state.

Yad Vashem’s blind spot when it comes to the imperialist framework of scientific racism links to Zionism’s own genesis as “a Jewish movement for colonial settlement” on the basis of a “radical distinction between privileged Jews and unprivileged non-Jews”, as Edward Said described it.

Zionism proffered the idea of a Jewish nation “reclaiming” its land with a twist on a well-worn colonial formulation: “Palestine is a land without people for a people without land.” It accepted the precepts of European racism, on the basis of which Israelis are entitled to exercise dominance over “nonexistent”, “backward” Palestinians, as Said described it.

Time and again, Palestinians across different social strata told our delegation that they are positioned as “lesser” beings. Said wrote that Zionism’s aim was “saving the Jews as a people from homelessness and anti-Semitism, and restoring them to nationhood”, which was “fully justified”. Yet, he continues, Zionism was “exclusively and institutionally lived” within a Western culture that made it “possible for Europeans to view non-Europeans as inferior, marginal and irrelevant”.

This is the basis for a social-Darwinist hierarchy in Israel, which positions Palestinians as the “inferior native other”.

Nowadays, Israelis can draw on American-inspired racialised notions of “terrorists” to criminalise Palestinians who resist occupation. Even members of our delegation experienced Israeli racial profiling – they were singled out for “security checks”.

The result is that Palestinians are now a stateless people. Apart from needing permits to move between Israel and the occupied territories, Palestinian people in the West Bank and East Jerusalem enjoy only “resident” status, which the Israelis revoke if one is absent for seven years. Thousands lose their residency every year.

About 780 000 Palestinians fled or were forced to leave during the 1948 war. They and their descendants are still denied the right to return. The facts on the ground confirm that the Israeli logic is to eliminate Palestinians from the land of Palestine.

The irony could not be more bitter. A stateless people seeking to counter the murderous terror unleashed upon them renders another people stateless and pushes them, by means of state violence, into a condition of humanitarian emergency. A people seeking to humanise themselves in the eyes of the world dehumanises another.

You can’t wall others out without walling yourself in, as we learnt in South Africa.

Dr van der Westhuizen was part of a civil society delegation that visited Israel, the West Bank and East Jerusalem last month. The trip was facilitated by Open Shuhada Street and the Heinrich Böll Foundation.

This piece was originally published in the Mail and Guardian.