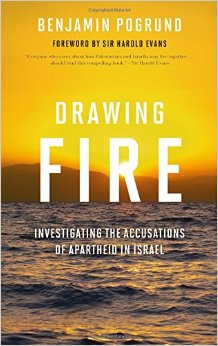 DRAWING FIRE: Investigating the Accusations of Apartheid in Israel

by Benjamin Pogrund, (Rowman and Littlefield)

This question is not difficult to answer as it is evidently clear from the sub-theme on the book’s cover: “Investigating The Accusations Of Apartheid In Israel”. Indeed the first sentence in the foreword written by Sir Harold Evans, former editor of the British Sunday Times poses the question “Is Israel an apartheid state?” and goes on to heap lavish praise on Pogrund for making the case that there is no comparison between apartheid in South Africa and what he refers to as “civil society discriminations” against Arabs in Israel.

His purpose thus in writing an elaborate book retailing at an exorbitant price has turned out to be a clumsy effort to present Israel in sunshine terms and to refute allegations of it being an apartheid state.

His investigation is divided into twelve chapters ranging from “The Beginning” to “The Way Forward”. Though comprising over 300 pages in total, the crucial issue of Apartheid in Israel and its comparison with Apartheid South Africa is limited in scope and depth, within 14 pages. Yes, 14 pages preceded by 6 pages which seek to tabulate a point-by-point comparison of Israel inside the Green Line with South African Apartheid. A poor effort to deny the daily discrimination experienced by Palestinians despite the fact that their testimonies feature regularly in mainstream media and are authenticated by independent studies – many indeed by Israeli scholars and historians.

It is quite disappointing that as a former journalist with the Johannesburg-based Rand Daily Mail who reported “black politics and black existence, from housing, education and health in urban ghettoes and rural areas to resistance to apartheid and torture and abusive conditions in prisons”, fails to subject an analysis of Palestinians facing similar and worse conditions.

Pogrund’s confession though about having joined the Israeli government delegation to the United Nations’ World Conference Against Racism held in Durban in 2001, reveals a bias that I find replete in his book in favour of Israel. Until then he admits to have equated “the pain of the oppressed in South Africa with the pain of oppressed Palestinians”. Despite being a journalist he discarded the ethic of impartiality, jealously guarded by professional scribes, to get involved as an official of the Israeli regime.

Nevertheless, the book opens up a much needed debate on the treatment meted to Palestinians. And while it may gall Pogrund’s backers and sponsors, he admits that some of Israel’s problems are self-inflicted: “…its military occupation of the West Bank and maintaining the oppression of Palestinians, plus the siege of the Gaza Strip”.

Unable to entirely conceal the reality of pain and suffering endured by Palestinians at the hands of successive Israeli governments, Pogrund’s attempt to downscale it is blatantly dishonest and utterly disingenuous: “Yes, Israel’s Arab minority does suffer discrimination, but their lot is not remotely comparable with blacks under apartheid”.

If occupation, oppression and discrimination do exist, what then is Pogrund’s book about? It’s to do with public relations and the need for Israel’s Hasbarah [propaganda] to contest usage of the word “Apartheid”. And herein lies the rub: “If Israel is an apartheid state, it would deserve to be shunned and cast out by the civilized nations of the world. International sanctions would be justified to punish it and to pressure it to change”.

Two chapters titled The Critics [1] and The Critics [2] provide further affirmation that Pogrund has relinquished all sense of objectivity in pursuit of a desperate yet doomed to fail effort to immunize Israel from the label of apartheid. In a shameful display of remorseless vilification, he singles out institutions, publications, global forums, research institutes and individuals for censure. Unlike the 6 pages mentioned earlier, in these two chapters he devotes 30 pages to discredit critics of Israel.

Reading the language and accompanying venom, one may not be faulted in believing that his criticism of “The Critics” has been lifted directly from Israel’s rabid rightwing foreign ministry headed by former nightclub bouncer from Moldova, Avigdor Lieberman.

To give a sampling of his unmitigated venom, he charges Sparks with sins of commission and of omission, and among “those Westerners who seek to sanitise Hamas”. On the others this is Pogrund’s view summarized by me: Kasrils is ignorant and an unreconstructed Stalinist. Walker uses her name and skin colour to issue moral edicts for singers to boycott Israel. Falk has a deformed outlook. Davis is militant. Dugard has lost sense of decency and rightness. Carter is a nag. Tutu makes no sense. Esack’s academic quality deserts him.

In The Way Forward which is the concluding chapter, Pogrund advocates two states as the only solution. Again, it appears that notwithstanding his South African roots and involvement, he entrenches a myth which is an intrinsic part of rightwing propaganda by arguing that a unitary state with universal franchise for all is unworkable.

Drawing Fire is far from an objective critical study. It ranks as pure propaganda intended to stymie the momentous growth of solidarity for Palestine.