Red Carpet for Abbas in Pretoria: Genuine or Fake? 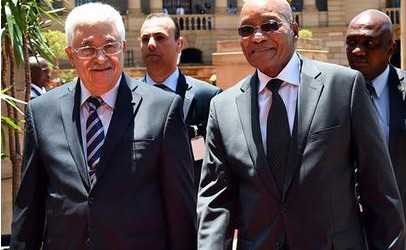 Palestinian Authority leader Mahmoud Abbas who was accorded a 21gun salute and red carpet treatment during his recent state visit to South Africa, must be pleased with himself.

After all, Pretoria is one of a number of capital cities in the world, where his nemesis, the ultra rightwing leader of Israel Benjamin Netanyahu, will be hesitant to travel for fear of facing warcrimes charges pressed by civil society activists.

The contrast is stark.

Whether its informed by a sincere desire by the ruling African National Congress (ANC) to realign itself with former comrades in the Palestine Liberation Organisation (PLO) whose quest for freedom remains in limbo, is debatable.

The uncertainty of the extent of the ANC’s commitment to Palestine, despite its repeated and well publicised statements of solidarity is grounded in the fact that it is ultimately the effective ruling party in government.

And public perception is that as the government, a large part of the ANC’s resolutions in support of Palestine, is seemingly unnoticed or ignored.

An example is the ANC’s unconditional endorsement of Boycott, Divestment and Sanctions (BDS) against Israel which clearly is not upheld by the Zuma administration. Indeed government’s ties with Israel appears to have strengthened if growth in trade links is to be measured over the last two decades.

This is obviously a contentious issue that has dogged the ANC ever since 1994. After the end of apartheid, instead of dumping an erstwhile enemy of fellow freedom fighters, it chose to retain apartheid-era diplomatic ties with Israel.

The anomaly of doing business with the enemy of your friends knowing that this enemy was in bed with your own enemies and thus responsible for the oppression you suffered, is quite unsettling.

“Talk Left and Walk Right” is the unfortunate legacy of Thabo Mbeki’s  foreign policy which endeared him to thugs in Western capitals who we now know, courtesy of US Senate’s Torture Report have flouted every known International Convention in pursuit of their illegitimate War on Terror (WOT).

That Mbeki was unceremoniously removed and replaced with Jacob Zuma by the ANC has not translated into meaningful changes in foreign policy, especially in regard to the expectations Palestinians have.

One immediate expectation in the wake of the savage devastation caused by Israel in the Occupied Gaza has taken on an urgency that words fail to articulate. It quite simply is that South Africa exert the type of pressure necessary to force Israel to allow uninterrupted access to and from Gaza or else…!

Any other action short of threats will not be understood by Israel as reflective of South Africa’s seriousness. In other words, unless a dramatic stance is adopted by Pretoria in defence of Palestinian rights, Israel will continue maintaining its illegal occupation and grabbing more land in East Jerusalem and the West Bank for racist Jewish settlers.

Its pretty clear to Palestinians that the ANC has transformed from a liberation movement to a government in control of a country rich in resources and diversity, while the PLO faces daunting challenges to overcome an increasingly belligerent colonial power.

Reality is that in the last 20 years of ANC rule, its foreign policy vis a vis Palestine has been to Israel’s advantage. And until the playing fields are not levelled, will continue to the detriment of Palestinian aspirations and quest for freedom and justice.

If the Abbas visit is not followed up by a serious review of policies and an acceptance that a drastic overhaul is imperative if South Africa is to regain its moral high ground, the Zuma administration’s display of pomp will be viewed for what it is: fake!