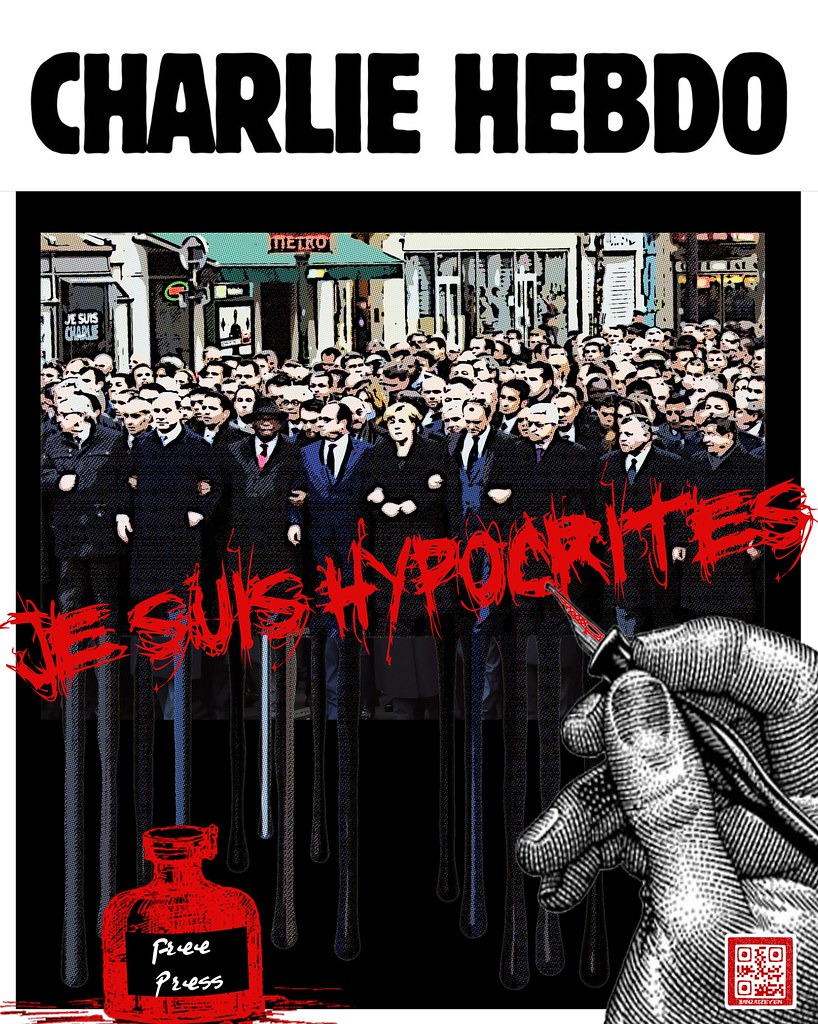 As the world stood in solidarity after the Charlie Hebdo atrocity, world leaders cynically used Paris to hide their own violations of press freedom, writes Suraya Dadoo.

In the days immediately following the Charlie Hebdo bloodbath, there was an unprecedented global outpouring of solidarity, culminating on Sunday, 11 January, when 40 heads of state ‘led’ more than a million people in a march to honour the victims of the Paris shootings. Perhaps we should have smelt a rat when a wide shot displayed on French TV news reports showed that the front line of leaders was followed by a dozen rows of other dignitaries and security officials. It seemed that the world leaders didn’t really lead marchers in Paris but conducted a photo-op on an empty, guarded street.

But that’s not where this “pseudo-solidarity” (to borrow American commentator, Gerry Hassan’s term) ends. A quick scan of the first row revealed that nine of the countries represented by leaders and dignitaries in the march for ‘press freedom’ are themselves in the bottom third of Reporters Without Borders World Press Freedom Index! Eleven days into 2015, and we already had a strong contender for Ironic Moment of the Year.

I had to remind myself that I was reading the New York Times editorial and not The Onion, when images of the prime minister of the country that imprisons more journalists than any other country in the world (Turkey) and the sheikh from a Gulf state that jailed a man for 15 years for writing a poem (Qatar) was hailed as “unity in outrage”.

Egypt’s Abdel-Fattah al-Sisi, through his foreign minister Sameh Shoukry, led the pack in the march for freedom of speech – just not for Al-Jazeera journalists Peter Greste (released this week), Baher Mohamed, and Mohamed Fahmy, who have been languishing in Egyptian jails for over a year. Saudi Arabia was also represented by its ambassador, just two days after blogger, Raif Badawi, received the first 50 of a thousand lash sentence for “insulting Islam”.

Under the leadership of Benjamain Netanyahu, Israel has killed more journalists than any other country in the world – apart from Syria. In its 50-day war in Gaza in July, Israel killed 17 journalists. In 2013, Palestinian cartoonist, Mohammad Saba’aneh, was arrested and detained without charge for five months. Not to be outdone, Palestinian president Mahmoud Abbas had several journalists jailed for insulting him in 2013.

King Abdullah of Jordan sentenced a Palestinian journalist to 15 years in prison with hard labour. Algeria, represented in the march by its foreign minister Ramtane Lamamra, has detained journalist Abdessami Abdelhai for 15 months without charge. Mehdi Jomaa, prime minister of Tunisia, recently imprisoned blogger Yassine Ayan for three years under the accusation of “defaming the military”.

Bahrain is the second biggest jailer of journalists per capita in the world, yet it was brazenly represented in the march by its foreign minister. Post-Paris march, the country continued to protect free speech post by sentencing politician Sayed  Jameel Kadhem to six months in prison for criticising the elections.

Europe, too, has its predators of press freedom. Nato, represented in Paris by its secretary-general Anders Fogh Rasmussen, is yet to be held accountable for deliberately bombing and killing 16 Serbian journalists in 1999. Polish Prime Minister, Ewa Kopacz, proudly marched for a free press even though her government raided a magazine to seize recordings that the ruling party found “embarrassing”. Russian foreign minister Sergei Lavrov represented a country with one of the highest rates of censorship.

So, you can understand why I found it difficult not to laugh when CNN journalists gushed over this high-level support for freedom of speech from these newfound press freedom luminaries.

Freedom of expression and the media has never been – nor should it be – absolute. Even Charlie Hebdo acknowledged this in 2008, when one of the magazine’s cartoonists, Maurice Sinet, who worked under the pen name Sine, faced charges of “inciting racial hatred” for a column he wrote that suggested that then-President Nicolas Sarkozy’s son was converting to Judaism for financial reasons. Charlie Hebdo’s editor, Philippe Val, asked Sinet to apologise but he refused, and was fired by the magazine.

But to have some of the most vicious governmental enemies of press freedom, who are currently waging their own war against journalists and commentators, championing the cause of free speech is an insult, not just to the victims in Paris, but to all those denied basic media freedoms.

Many of the leaders at the Paris march had no right to proclaim their solidarity with Charlie. Rather, their signs should have read: “Je suis Hypocrite”