BOOK REVIEW: “Shell-Shocked: On The Ground Under Israel’s Gaza Assault” 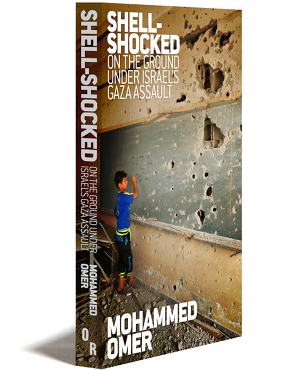 A year after Israel’s bloody massacres in Gaza, it may appear that much of the world has forgotten about the immense suffering caused by Operation Protective Edge. However, not for Palestinian journalist Mohammed Omer. He, alongside 2 million Gaza refugees  faced fifty-one days of hell, and the experience chronicled by him has just been published by OR Books.

Timely and filled with harrowing accounts of life on the ground during Israel’s brutal carnage in the tiny besieged coastal enclave, Omer’s eyewitness dispatches make a profound contribution to understanding Gaza’s tragic plight.

300 pages of Shell-Shocked, bears testimony of Omer’s extraordinary professionalism and amazing tenacity to capture in words the horror unleashed by the Occupying power Israel.

It must be noted that apart from his role as a journalist, Omer is also a resident of Gaza who with his wife and three-month-old son, had to endure the terror of the Zionist regime’s colossal ground, air and naval assault.

In his own words Omer explains, “…I am a resident of Gaza and suffer through daily local attacks, as well as the major assaults every few years. This has been my experience of life, first as a child, then as a young man, and now as a father and husband: I was born a few years prior to the first intifada. Today four generations have lived under this occupation. The majority of us in Gaza have known nothing else.”

Shell-Shocked is a grim reminder that the July 2014 assault was the third, and to date the worst waged by Israel against Gaza since 2008. Its compendium of reports reminds us too that the latest was an outrageous act of premeditated aggression which the rightwing Netanyahu regime gave the Orwellian name “Operation Protective Edge.”

Nearly 2,200 Palestinians were killed; about a quarter of them were children, many of whom were deliberately and viciously targeted. One hundred and forty-two families lost three or more members. About 11,000 were injured, maimed or permanently disfigured. 18,000 housing units were destroyed or severely damaged, displacing nearly 20,000 families comprising of about 108,000 men, women and children. 17,000 hectares of crops flattened and the agricultural infrastructure that sustained life almost entirely decimated.

Omer’s analytical reports illuminate how relentless and utterly merciless the Israeli war machinery has been.

For instance in one of the reports titled “Our bodies are spent, but our spirit endures”, the author captures the human drama as: “The days flow from one into the next, punctuated by breaking stories, covering one massacre to the next. Each day another home is bombed. Homes with children sleeping inside.”

Omer laments the fact that very few in the mainstream media ever talk about the right of the people of Gaza to defend themselves or even just to exist.

Shell-Shocked not only contains reports of the terror visited upon Omer’s people; the tales reported reveal the extent of dehumanising that’s occurred allowing most of Israel’s allies to look away from the immense suffering Gaza has had to endure.

The book is a remarkable testimony of the professionalism and serious commitment to accuracy of Mohammed Omer. As John Pilger observes, “This great reporter and his family were under fire day after day.” Despite bombs raining around him, “…he produced eyewitness dispatches of such clarity and brilliance that, almost single – handed, he reclaimed the honour of real journalism.”

In his praise, Rashid Khalidi says: “Written with painful immediacy, these are more than dispatches from a war zone: they convey the human reality of people who manage to survive and endure in conditions that have grown grimmer and more inhumane over the years.”

Sara Roy correctly affirms Omer as a professional journalist determined to create a precise record of events occurring in front of him. And having read the heart wrenching accounts of fifty-one terror filled days and nights, I agree with Roy’s amazement about how such monstrosities can be visited on a trapped and helpless population.

Omer’s profound contribution will ensure that Israel’s war crimes in Gaza will not ever be allowed to be swept under the carpet. Indeed the testimony of survivors as captured by the author will certainly have a role in determining justice for Gaza and its besieged people.