Sisi and the magic of Pharaoh: the untold story of the Suez‏ 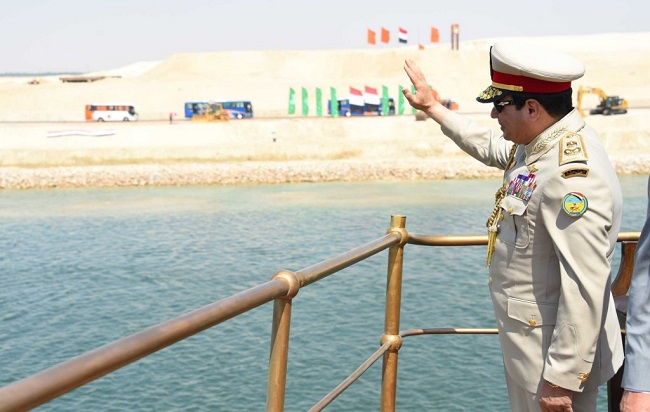 Historians and theologians alike have pondered over the Biblical story of Moses and the Pharaoh of Egypt, especially the incident which describes how Moses led his persecuted people to the sea and through divine intervention, struck his Rod on its shores demonstrating an extraordinary miracle in splitting the sea, saving his people from the rage of pharaoh of Egypt.

In an analogous abstract reminiscent of pharaoh’s arrogance, on August 6th 2015, in an area not too far, Egyptian coup leader Abdel Fattah al Sisi, the self-proclaimed “savior” of Egypt, clad in full military attire, led his clique, media and a modest foreign delegation to the shores of the Suez Canal to inaugurate an $8bn expansion of the Suez canal or “the Second Suez Canal” as the enthusiasts call it. An event preceded by a series of exuberant ceremonies and a wave of hyper-nationalist jubilation around the distressed country.

For a fanatic pro-Sisi Egyptian media, the project ushered a new era in Egypt’s history – hailing the Military leader as the architect of “this remarkable national achievement and the purveyor of future Economic prosperity”. The lavish event was the zenith of weeks of frantic anticipation concocted by the Egyptian state and pro-regime media and oddly mimicked by some Western and Arab states (Egyptian officials issued memorial stamps of the new canalusing images of the Panama Canal in a comical gaffe). The coup-regime claims that the expansion will more than double the revenue generated by the canal, and Sisi, the celebrated triumphant offered his project as “a gift to the world” even though no study has been released to the public clarifying its importance.

It seems that the Suez Canal has an incredible role in the consolidation of autocratic rule in Egypt. Over the past decades especially in the critical stages of Egyptian politics and during its fundamental shifts, particularly since the military coup in 1952 or what was called at the time “Free Officers” revolution. In a strange repetition of events, the Suez Canal played a critical role in the consecration of Gamal Abdel Nasser’s rule after his decision to nationalize the Suez Canal, subsequent to the military coup on President Mohammad Najib in 1954. Sisi has essentially decided to open the Nasser’s manual of governance and restore guidelines that seemed forgotten, particularly after the January 25th revolution.

After leading a bloody coup that toppled the country’s first-ever democratically elected Muhammed Morsi in 2013, Sisi has reenacted policies that make use of mass propaganda and state manipulation to promote devious agendas with much more vigor. Nasser’s ‘WadiAlgedid’ project, Sadat’s ‘Salheya establishment’, Mubarak’s infamous ‘Toshka’ have all been marketed as schemes that would shift the scope of Egypt and would institute the country as a Superpower on the global platform. National Mega-Projects that would be promoted by hysterical media campaigns and would almost always end up fictitious.

Nonetheless, the much-promoted “second canal” is actually a 35-kilometer channel bypass and is not the first extension. Two similar bypasses to the Suez Canal were completed in 1980; the longest of these was the 40.1 km Port Said bypass. However with Egypt’s crippling economic crisis and its dependence on foreign assistance to simply survive, the $8bn expansion makes little economic sense and opens questions on

how the bypass would double the revenue if all, as it only offers a 7 hour time saving in a vessel’s journey. The canal’s profit is measured with the surplus of vessels passing, which is rigorously tied with the world trade figures – an increase in world trade would result in an increase in vessels passing and would result in more revenue at the Suez, with world trade, at best, stagnant since the 2008 recession, experts find the bypass financially impractical.

The exaggerated economic excuses raise questions about the genuine intentions behind the scheme which has been contractually handed to the engineering arm of the Military without any tender process or monitoring institute. It is as much about inculcating Sisi’s lack of legitimacy and provoking chauvinistic army loyalty as achieving superficial fast returns through a doubtful megaproject, a big proportion of which is paid for by individual pro-sisi Egyptians, buying up state-issued bonds and eagerly await their 12% interest returns.

One finds enough cynicism to hinder debating the project on its economic merits; The disproportionate media fanfare accompanied with the announcement of this project; the complete absence of details or feasibility study to prove its economic significance; or a regulator to manage and protect the interest of Egyptians albeit the emergence of perplexing misinformation and inconsistencies in the reporting by state officials. With little difference, the ‘new Suez Canal’ is merely a vanity endeavor that offers to the public a deception of progress with a purpose of bolstering Sisi’s unstable rule and to raise billions from the Egyptian people to help propel the ailing economy. In reality, since his farcical elections in 2014, Sisi has struggled to gain legitimacy both among Egyptians and in the international community and finds himself desperate for any achievement to validate his position and distract the public from the social, political and economic problems that Egypt truly faces.

Since his rule, thousands have been killed, tens of thousands detained and hundreds more sentenced to death in sham trials in the bloodiest crackdown on opposition. The brutal crackdown has not succeeded in ending a mounting upsurge of protests. Hundreds of thousands of Egyptians have been taking to the streets every week, and new protests led by young people have intensified, demanding the restoration of democracy. Police brutality, mass arrests, torture and rape have become a commonplace and as a result provokes counter violence, and without overlooking the rise in militant insurgence in Sinai that threatens to spread.

Using his pro-state media battalion coupled with his Pharoah-like magic, Sisi finds little difficulty in pulling off mass deceptions or manifesting his autocratic rule. With minute or no objective voices available to help the people to logically analyze the scene, in the face of incessant enormous state propaganda bombardment, the people are left unprotected and vulnerable to the charade machinations. One cannot foretell how long it will take before the rest of Egyptians will discover the reality of the Sisi-mania and blind chauvinism that prevails in a highly polarized society.

It is clear that in the Pharaoh vs Moses rhetoric, Sisi finds himself closer in resemblance to the ruthless Pharaoh. Perhaps the youth that led the January 25 revolution are the Moses of our contemporary times – Now wandering in the wilderness, punished for scuffling over an incomplete revolution.