US Terror Threat – Myth Or Diversion? 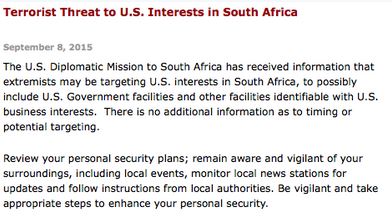 As South Africa began to make sense of shocking revelations by a Sunday Times lead story on SA Jews undergoing military training in Israel, a day later, the American embassy in Pretoria fired a missile. Its explosion reverberated across the country and in many parts of the world. Overnight the dominant news centered around what turned out to be a paltry few paragraphs which warned of an unsubstantiated terrorist threat to US interests in SA.

That the terror alert was vague, lacking detail and possibly designed to deliberately obfuscate, was quite evident. For instance by ambiguously referring to “extremists” as the culprits likely to target US interests, the embassy paved the way for all types of speculation, leading to confusion and of course, reviving the “Islamist” bogey. Once again, many media platforms resorted to acquire analysis from so-called “terror experts”. Invariably the end-result gave the scourge of Islamophobia a fresh lease of life.

Interestingly but unsurprisingly, SA’s intelligence and security ministry sought to downplay the American-fuelled paranoia. By countering the terror alert, they in fact disputed US intelligence sources, though not saying it in so many words. South Africa, since the dawn of democracy, would have learned that it is essential to distinguish “information peddling” from credible, verifiable intelligence.

In fact, this was quite evident at a meeting with senior intelligence officials on the eve of the 2010 FIFA World Cup. As part of the Media Review Network, I had the privilege of heading a delegation of Muslim leaders from across a broad spectrum of NGOs, facing the then Intelligence chief Moe Shaik and his team. Without exception, every single terror threat – from the so-called “Greenbushes training camp” near Port Elizabeth to imminent bombings of the American soccer game in Rustenburg – was rubbished by Shaik and his team. Despite a series of sensational, hyped-up reports which preceded our meeting, we were reassured that SA’s security cluster – including its intelligence arm – will not be influenced by discredited “information peddlers”. Remember, too, that at the time people such as Professor Hussein Solomon, were constantly quoted as claiming that the “terror threat” was real and imminent. Of course, none came to pass and the World Cup turned out to be a magnificent event, notwithstanding controversies surrounding the economics of staging it. These issues relate to corruption, in addition to claims that the billions spent didn’t result in the spin-offs for the poor and marginalised majority.

So what do we make of the most recent “terror alert”?  Firstly,  it must be noted that its timing in the wake of ANC leader Obed Bapela’s biting remarks regarding Israel, was, and is quite intriguing. Secondly, that it emerged from comments made by SA’s security ministry about not being briefed by the embassy prior to its alert, was and is pretty strange. Finally,  that the embassy had not shared details of its intelligence with its host country, was and is, highly irregular. Whether the well-timed move was influenced by collaborative design between the CIA and Mossad to deflect public attention from hugely embarrassing revelations spotlighting Jewish mercenary activities, is anyone’s guess. In any event, weeks later it seems that the “terror threat” has fizzled out, though the stigma attached to its choice of words especially the highly-emotive, unqualified adjective “extremists” remains.