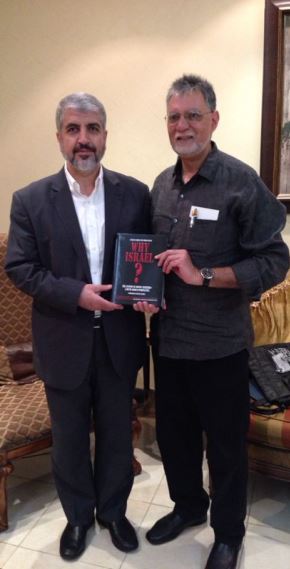 The recent visit to our country of the high-powered Hamas delegation headed by Khalid Mishaal, gave the reading public an opportunity to assess and understand the Hamas side of the Middle East conflict. Senior IOL journalists Janet Smith and Shannon Ebrahim did exactly that. The reaction from some quarters is not surprising at all, since the Zionists believe that their version of conditions on the ground is the only version. Unfortunately for them, every “coin” has two sides. It is time we saw the other side of this “coin”.

Unfortunately critics of the visit seldom mention the most important factor at play — and that is the chronic violence borne by Palestinians called the “OCCUPATION.” The violence of permanent siege, physical dispossession, daily humiliation at check-points and in the streets, painful separation of families, near-starvation, repeated closures of businesses and schools, ban on travel, home demolition, uprooting of trees, omnipresence of armed soldiers and threatening settlers at every corner, all of this is not considered violence and thus not newsworthy. It is the order of things, the preferred status quo, that which does not disturb the quietness of the opulent middle class in the high-tech suburbs of Tel-Aviv, the raucous parading of Jewish bigots in Al Quds and Hebron, the windsurfing of beachgoers at Eilat, the camping of IDF retirees on the Red Sea that is exciting and newsworthy.

From time to time, unsubstantiated reports concocted by officials and representatives of the propaganda machinations and funded by the Zionist state’s intelligence services  would have us believe that the Zionist entity have made numerous attempts to protect the “status quo” in Jerusalem and the occupied territories.  Nothing can be further from the truth.

The ultimate aim of these dishonorable and mendacious propagandists  is to discredit not only  Hamas but the entire Islamic camp, not only in Palestine, but also in the entire Arab and Muslim world.

What else can be said of “intellectuals” and “writers” who claim that Palestinians who fight for their honor, freedom and basic human rights are “terrorists” while the Judeo-Nazi killers who came from Eastern Europe, to steal a land that belongs not to them, represent the forces of freedom, justice and enlightenment.

The goals and tactics of these hypocrites have not really changed much over the passage of time. They would spread lies, rumors, and occasionally half-truths in order to weaken the ranks of the resistance movements in Palestine, including Hamas.  The reason for this treacherous conduct is very simple: The hypocrites do not want a resolution to the Middle East problem. The Zionist State needs an existential threat, which gives them the licence to continue the Zionist Agenda of “Eretz Isreal”, from the Mediterranean Sea to the River Euphrates.

The West, including the United Nations and the European Union have wasted precious years conducting failed peace talks with the Zionist State.  They were repeatedly advised and exhorted to be vigilant and cautious as to Zionist tactics, but to no avail. And, as expected, the inevitable outcome of these high-pitched encounters found expression in the continued expansion of the Zionist colonies in the West Bank and East Jerusalem.

Notwithstanding treacherous conspiracies constantly devised against Hamas by Hamas’s enemies, Hamas is likely to stay with us for a long time to come and even grow.
Since 2006, when Hamas won the Palestinian legislative elections, defeating the American-funded Fatah movement, the United States and its puppet regimes and allies in the Arab world used every conceivable means to undermine and weaken Hamas.

Israel, for its part, resorted to Nazi-like crimes in an effort to decapitate Hamas by imposing a airtight blockade on the Gaza Strip to pressure the people of Gaza to rise up against Hamas. Israel launched vindictive onslaughts on the Gaza Strip, killing and maiming thousands of innocent Palestinians. During that manifestly criminal aggression, the Israeli air force wreaked pornographic destruction on thousands of structures, including homes, mosques, government buildings, bridges and the coastal enclave’s infrastructure. Entire families were exterminated as one Israeli official vowed to inflict a holocaust on the virtually helpless and unprotected Gazans.

Despite the murderous Israeli attempts to decapitate Hamas, the Palestinian Islamic movement is still able to command the support of hundreds of thousands of ordinary Palestinians. It is true that life in the Occupied Territories is difficult and the suffering is rampant. But it is also true that the Palestinians don’t blame Hamas for their suffering. After all, it was Israel, not Hamas, that imposed and continues to impose a criminal vice grip on the occupied people and it was Israel, not Hamas that launched the Nazi-like blitz against the people on numerous occasions. The Palestinians are not a flock of sheep that would stand at the receiving end of Zionist savagery and criminality and then play into Israel’s hands by blaming Hamas for that criminality and barbarianism. I say unhesitatingly that the Palestinians trust Hamas and it is no exaggeration that  Hamas’s ability to survive all the conspiracies coming from all directions is nothing short of a real miracle.

Notwithstanding the loss of many top leaders including Shaikh Ahmed Yassin and Abdul Aziz Rantisi, at the hands of Zionist terrorism, the movement rooted in Islam, is not based on the charisma of one individual.  Following the showdown with Fatah in 2007, many western news agencies imitated the big lie that Hamas carried out a coup against the so-called Palestinian “legitimacy”, ignoring the fact that Hamas was itself the government, having won the elections. Unfortunately, many western media continued to imitate the same deception. They simply overlooked the fact that the American and Israeli intelligence colluded and connived with certain Palestinian warlords to destabilize Hamas before ganging up on and decapitating its legitimate government.

Was Hamas expected to sit back and watch the US, Israel and other Palestinian sell-outs sharpen their daggers and swords to decapitate them once and for all?  Only honest people would answer this question honestly. As for the anti-Palestinian lobby groups in our country, the word honesty doesn’t seem to exist in their lexicon.

Ex educator and spent the last 14 years in education as headmaster. A proud Muslim and keen internationalist. Passionate about human rights issues. No respect for politicians.