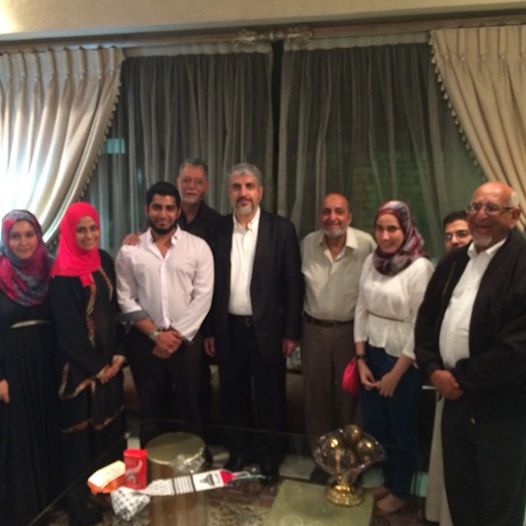 Last week, South Africa experienced a truly momentous occasion when the leader of Hamas, Khaled Meshaal, and his delegation arrived on our soil. Welcomes filled with joy and the utmost of respect awaited them as they travelled countrywide, thronged by crowds elated to finally be meeting the legendary men of resistance, who have for many become synonymous with the struggle and courage against Israeli occupation. Having been welcomed officially by the ruling party, the ANC, was an even greater act of symbolism, and hosting Mr Meshaal was a true victory for democracy and SA.

Allister Sparks, the South African journalist who was editor of the gutsy paper the Rand Daily Mail for four crucial years 1977-81 when it was a leader in uncovering many of the sins of apartheid, had also flown to Damascus and spent two days at the Hamas headquarters interviewing its exiled leaders in 2006. He believes that Western governments and media have ignored Hamas in much the same way that exiled ANC was ignored by the South African apartheid government. Both the ANC and Hamas were categorized as terrorist organisations, barred from expressing their true intentions of representing their people. Israeli law prevents journalists from meeting with Hamas officials and reporting their statements; in much the same way that Apartheid legislation made it a crime to quote any statements made by the anc. This ensures that the Israeli narrative of Hamas being an evil, terrorist organisation is maintained, and the occupation is allowed to foster itself under the pretext of protecting Israel from such culprits.

However, the Hamas I saw first-hand was very different from the behaviour terrorists usually purport. Here was a charismatic, articulate, goal-driven man, whose every answer reflected his peoples’ best interests at heart and whose clear desire is peace. Khaled Meshaal is a leader committed to bringing justice to the Palestinians; an objective reaffirmed in every word spoken. As he joked with journalists, greeted every single person in the room personally before every meeting or conference and addressed the media with his unwavering smile, I was flabbergasted to think such a man and his movement could be branded as terrorists. My sentiments were echoed by Allister Sparks when he wrote after his five hour intimate meeting with the leadership- “It was an eye-opening experience to hear their side of the story and discover the degree to which they, too, are sophisticated, pragmatic people who I believe are the only ones capable of negotiating a peace agreement that could stick – since, like the ANC, they are the only ones whose control extends to the people with the guns.”

On the 25 January 2006, Hamas won 76 of the 132 seats in the parliamentary election, giving them the right to form the government and represent the Palestinian people who obviously had invested so much of faith in their leadership. Their sweeping victory in one of the fairest elections ever held in the Arab world shocked Israel, the US and many western governments, and economic sanctions were imposed on the Palestinian people as collective punishment for voting Hamas into power. The US and Israel, who pride themselves as being beacons of democracy, were responsible for one of the most undemocratic actions of the 21st century. Since then, Hamas has still reaffirmed its place in the Palestinian peoples’ hearts as their leaders, and now being officially welcomed by the ANC has been sure reiteration that the tides are indeed changing, and the time of justice and global recognition of the rights of the Palestinian people is fast approaching.

Meshaal reverberated the calls for the recognition of the rights of Palestinians to liberation and freedom, and in the same breath would remind all those listening to remain rational and moderate at all times. Demanding basic human rights for Palestinians is rational and necessary for justice, and it is high time that Israel acknowledges that blatant occupation is not going to achieve peace or stability. The ANC has been profound in realising this, showing other ruling parties the path to justice too.