Demonising Hamas will not bring peace 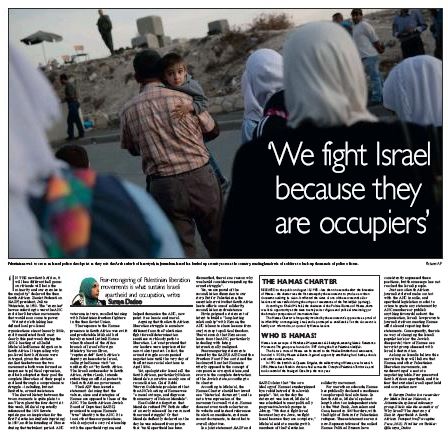 “In the new South Africa, it will be a different ball game: our friends will be in the minority and our enemies in the majority,” declared then-South African Zionist Federation (SAZF) president, Julius Weinstein in 1993. The “enemies” Weinstein was referring to were the African National Congress (ANC) and other liberation movements that would shortly come to power.

Weinstein’s thinking has defined local pro-Israel organisations since the early 1990’s, and it manifested itself most clearly this past week during the ANC’s hosting of a Khaled Misha’al –led Hamas delegation to South Africa. It is puzzling why pro-Israel South Africans were outraged, given the obvious similarities between the two movements: both were formed as responses to political repression, and both adopted as their goal the complete liberation of their people and land through a comprehensive struggle – including, but not limited to, armed resistance.

The shared history between the two movements is quite plain to see. Throughout the four-day visit this week, Misha’al repeatedly referenced the 1976 Soweto uprising as an inspiration for the first Palestinian intifada in 1987, and the founding of Hamas during that turbulent period. ANC veterans, in turn, recalled training with Palestinian freedom-fighters in the then Soviet Union.

The response to the Hamas presence in South Africa was swift and predictable. Misha’al had barely entered Luthuli House when the head of the Africa branch of Israel’s Foreign Ministry, Yoram Elron, “reprimanded” South Africa’s deputy ambassador in Israel, calling the Hamas visit “an unfriendly act” by South Africa. The Israeli ambassador to South Africa, Arthur Lenk, intends submitting an official protest to the South African government.

The SAZF then issued a statement claiming that the values, aims and strategies of Hamas are opposed to the ANC.  The South African Jewish Board of Deputies (SAJBD) promised to expose Hamas’s “true” identity to the ANC. It is bitterly ironic that these organisations, who enjoyed a cosy relationship with the Apartheid regime, and helped demonise the ANC, now paint it as heroic and moral.

Arguing that the South African liberation struggle is somehow different to the Palestinian fight for self-determination sanitises our bloody path to liberation. Let’s not pretend that our leaders were imprisoned for non-violent protest. In fact, the armed struggle accompanied negotiations until the very day of the first non-racial elections in April 1994.

Yet, apologists for Israel sell the South African, particularly Mandela’s, narrative as only one of reconciliation.  Chief Rabbi Warren Goldstein proclaimed that the ANC’s hosting of Hamas was “a moral outrage, and disgraces the memory of Nelson Mandela.”

Yes, we are proud of the reconciliation dimension to our story. But for Palestinians, the essential narrative that South Africa has to offer is one of solidarity, reconciliation and resistance.

Having signed a statement of intent to build a “long-lasting relationship” with Hamas, the ANC is keen to share lessons from our journey to political freedom. There is much that Hamas can learn from the ANC, particularly in dealing with being internationally maligned.

Fear-mongering statements issued by the SAZF, SAJBD and the Freedom Front Plus contained the hackneyed line that Hamas is utterly opposed to the concept of compromise or negotiations, and sworn to the complete destruction of the Jewish state, according to its Charter.

According to Misha’al, the Hamas Charter should be viewed as a “historical document”, and is not a true expression of the movement’s overall vision.  Hamas does not even use the Charter on its website and instead references its election manifesto, and more recent documents, to describe its overall objectives.

In a joint statement, SAZF and SAJBD claim that “the core ideology of Hamas is underpinned by a rabid hatred of the Jewish people.” Yet, on the day the statement was issued, Misha’al was scheduled to meet  politically progressive Jewish groups in Johannesburg. “We do not fight Israel because they are Jews, we fight Israel because they are occupiers,” Misha’al said at a meeting with members of the Palestinian solidarity movement.

For over a decade, Hamas has publically declared a readiness to explore political solutions. In South Africa, Misha’al spoke at length about an independent state in the West Bank, Jerusalem and Gaza, based on 1967 borders, with the Right of Return for Palestinian refugees.

These statements are not new. Representatives of the exiled Hamas political bureau have consistently expressed these positions, but the message has never reached the Israeli people.

Just as no South African journalist dared make contact with the ANC in exile, and Apartheid legislation made it a crime to quote any statement by ANC members or publish anything favourable about the organisation, Israeli law prevents journalists from meeting with Hamas officials and reporting their statements. Consequently, there is no way of changing the Israeli population’s (or the Jewish diaspora’s) view of Hamas as a terrorist group obsessed with Israel’s destruction.

As long as Israelis believe this narrative, they will believe that Hamas, and other Palestinian liberation movements, are undeserving of a seat at a negotiating table.  Fear preserved South African Apartheid, and it is fear that sustains Israeli Apartheid and occupation now.

Suraya Dadoo is a researcher for Media Review Network, a Johannesburg-based advocacy group. She is also the co-author of Why Israel? The Anatomy of Zionist Apartheid: A South African Perspective (Porcupine Press, 2013). Find her on Twitter: @Suraya_Dadoo