Mourning the Father: When Arafat arrived to Cairo 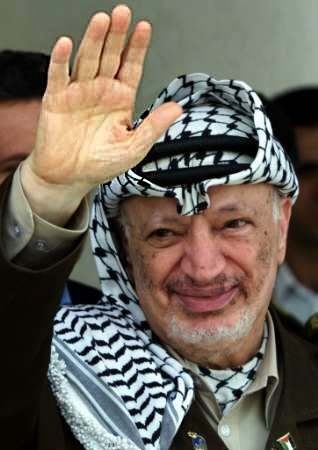 During President Yasser Arafat’s hospitalization in France, just before his death, I travelled from Paris to Cairo to spend the end of Ramadan and the Eid holiday in an Islamic environment. While in Paris I witnessed Palestinian and French-Arab expressions of solidarity with the ailing leader—manifested by lighting candles and spending cold and long nights around his pictures outside the hospital—Egyptians expressed deep, subtle and widespread grief when his death was announced and when his body arrived in Cairo, and real concerns about the future of Palestine. In addition to the formal military funeral organized by the Egyptian government in Cairo’s Dar Al-Jalaa military club, there was a grassroots farewell to Arafat organized by the Egyptian Popular Committee in Solidarity with the Palestinian Intifada. Held after Nov. 12 Friday prayers at Masjid al-Azhar, it was discouraged by the government and ignored by the media soon after it began. Had the government allowed popular participation in Arafat’s official service, my guess is that his coffin would have been carried on villagers’ shoulders.

In general, many people, whether or not they knew I was a Palestinian, expressed a message of solidarity and compassion with the daring Palestinian people, struggling for decades against the barbaric aggression of the Israeli occupation. As Ramadan ended, imams presiding over the Eid prayers in different Cairo masjids prayed for the well-being of Palestinians and expressed heartfelt calls to the Palestinian people to unite their forces in that most difficult situation. I noticed worshippers’ eyes reddening in tears when Palestine was mentioned.

After all, for ordinary people in Egypt and around the Arab world, Arafat is the face of the Palestinian nation and the symbol of its foundation. An example is Ali Al-Shawatfi, a 65-year-old villager from Al-Biheira Damanhour. He was visiting his friends in Cairo when we met just before the Ramadan iftar (the meal breaking the day’s fast). Watching the news reports on Arafat, Ali started crying. When I asked why he was so sad for Arafat, Mr. Al-Shawatfi told me he lost a brother, Mohammad, in Palestine in the 1967 war. “He was handsome and very young, and I had just quarrelled with him for borrowing a good sum of money and spending it on his fiancée before he went to war. His friends tell me that he was arrested in Sinai and then put with other prisoners under an Israeli tank and crushed to death. We never received his body or buried him,” he said, “but we got 40 Egyptian Pounds as compensation; 40 EP are hardly enough to buy 1 kilogram of lamb meat these days. But it was a good sum of money in 1967.”

Another listener interrupted, to offer sympathy as well over Arafat’s death. The encounters demonstrated how the death of Arafat cements most people’s relations, reactions and emotions to both their private and their national pain. For Ali, and most simple people like him, Arafat represents Palestine, his brother, and all the martyrs and the pain of his era. The rumors about the possibility that Arafat died as a result of poisoning, and the general feeling that Israel was behind that, feeds into the same instinctive, compassionate reaction to his death.

Egypt’s older generation, in particular, has a special and deep connection with the Palestinian wound. There was a time when almost every home had a martyr killed in war. During the time of President Gamal Abdul-Nasr, the issue of Palestine was part of Egypt’s standard education curriculum. It was removed following the Camp David agreement.

Then, after six years of severe economic and physical sacrifices and the propaganda of an inflated gain after the October 1973 war, the ordinary Egyptian opened his eyes to see the “oil-floating nations,” distant from the reality of war, developing their economies and countries through the labor of the children of “non-oil-floating nations,” including Egypt—something that still represents a serious wound to national pride. Egyptians thought to themselves: “We have paid a tax in blood to protect Arab nationalism, and, as a result, other Arabs look down on us.”

These thoughts, along with promises that a peace agreement would lead to an improved economic status, prepared the Egyptian public, willingly or unwillingly, to put up with Anwar Sadat’s decision to sign the Camp David agreement.

Today, a few ignorant, self-described educated, Egyptians dare to utter such dim-witted remarks as: “What happens in Palestine is in essence the fault of Palestinians, who sold their lands to the Israelis”; “Arafat was the ninth wealthiest person on earth and cared less about the suffering of his people”; “The ”˜Israeli Arabs’ are collaborators because they accepted Israeli citizenship”; “It is better to stay away from Palestinians; they bring troubles wherever they go.”

The Arab media is to blame for their lack of interest in correcting such faulty views.

Many compassionate others were simply concerned about the ability of the Palestinian people to produce a worthy successor like Arafat—or the possibility of Palestinians going astray after his death.

There is an element of danger and irrationality in that position, as well. Of course there will not be another Arafat—nor am I sure we need one. It is crucial that Palestinians analyze and criticize Arafat’s policies and management of our resistance over the years and draw the correct lessons from it—one being that neither Arafat nor any other leader can manage our predicament alone. Only a democratically elected parliament, in which all Palestinian political, ethnic and religious minorities are represented, is capable of articulating Palestinians’ needs and concerns at this point. At this critical juncture, elections must not be restricted to the office of president, but should include the Legislative Council as well. Moreover, the political groups participating in elections should not be limited to those established by or allied to Yasser Arafat and his Fatah party.

The only single leader behind which Palestinians should unite is our just cause. Maintaining that justness is the only way forward.

Despite all the political differences and disagreements among Palestinians about Arafat’s status as an historic leader and symbol of the Palestinian people’s struggle, there is at least an agreed-upon appreciation for the man—without any illusions about what he represented and will continue to represent for Palestine and Arab nationalism. Unlike most Arab leaders, Arafat was elected at least by some of his people (Palestinians refugees and those in the Diaspora had no vote in the elections). Throughout his life Arafat himself, if not many of the people around him and certain family members, lived modestly. He spent the last few years imprisoned in al-Muqata’a, his bombed-out Ramallah compound, enduring a long siege against him by his enemy.

Arafat was indeed mysterious, ambiguous and a manipulator. He annoyed his friends as much as he annoyed his enemies. He personally embodied the multiple political power of the PLO, Fatah party and Palestinian Authority, and was a battlefield fighter as well as a politician on the world stage. Whether it was representing Palestine at an international peace convention or granting a special request for financial assistance to a medically needy Palestinian, Arafat was in charge of it all. He accepted the Oslo accords, which were rebuffed by the majority of his people, but stood firm when pressured to compromise on Jerusalem and the Palestinian refugees’ right of return. He ran the Palestinian plight as a one-man show, as if it were his private affair, and Palestine his own property—which might be proof of his innocence, as well as his guilt.

Whether many Palestinians wished it or not, Arafat played the role of father figure. One can love, argue with or hate one’s father, but there is no way to ignore his looming status in one’s life.

Arafat has died, but Palestine is still alive. His death will be just another day, in a long march, in a difficult struggle, on the way to liberation and decolonization. As he sought to do throughout his life, may his death bring more visibility and enlightenment to the cause of his nation.

Samah Jabr is a Palestinian psychiatrist who cares about the well being of her people beyond issues of mental illness. She finished her training in psychiatry in France.