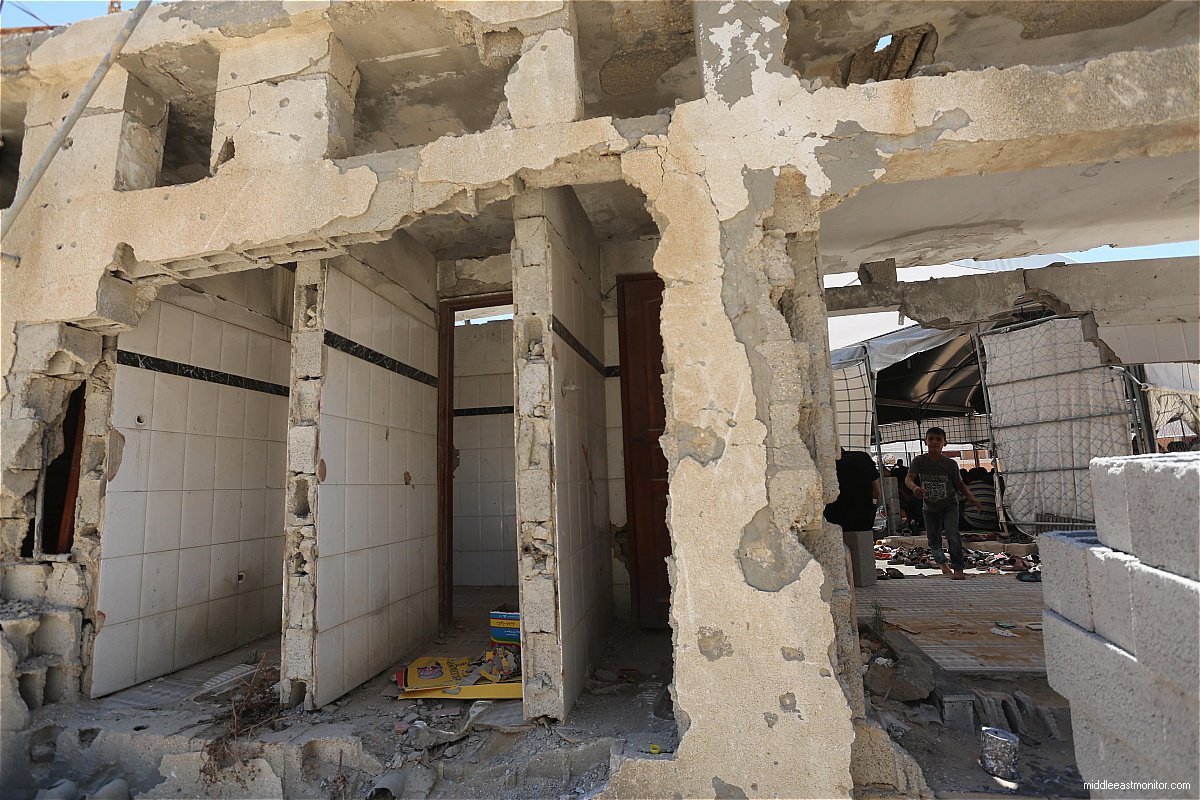 While the exercise of military control over an occupied country may be expected to inflict inevitable pain and trauma on the citizens of that country, the history of Israeli policy has far exceeded any “pragmatic” needs of an occupier to dominate and subdue a local population. The Israeli humiliation of Palestinians is an end in itself. Humiliation is thus one of the most important injuries experienced in the Palestinian context and yet, it is under-reported to such a degree that humiliation is viewed as almost normal.

Despite resolutions by the United Nations, the global acquiescence to the occupation of Palestine by the previous colonial powers has denied Palestinians their freedom, their status as citizens, and their exercise of human rights on an international level. At the level of society, the occupation has generated layers of humiliation through the maintenance of inequity within power relationships and perceptions of cultural status. In addition to these broad sources of injury, there are endless repetitive personal experiences of humiliation from which no Palestinian individual is spared.

The omnipresent Israeli forces come into daily contact with Palestinian men, women and children; in these interactions, humiliation and shame are typical. One asks: how can a humiliated man look into the eyes of his wife to make her feel protected and proud? How can a humiliated parent promise a future to a little one who is held in the hands of a human being whose spirit has been broken?

In one such example, Issa, a man who worked as a driver for a medical organisation, had transported a group of health workers to an isolated area affected by political violence (all names have been changed to preserve confidentiality). As he was waiting inside his vehicle for his colleagues to return, soldiers approached to ask what he was doing. He produced the proper documentation demonstrating that he and the medical organisation were authorised to enter this location and explained that he was waiting for colleagues to drive them back. A soldier began to shout at him so that everyone could hear: “You’re here to treat dogs! Come to my house to treat my sick dog!” The driver responded, “I don’t treat anyone. I just drive the car.” In response, the soldier struck Issa in the face.

In another case, my patient Mazen was walking home from work late one night in the Mount Scopus area of Jerusalem. He was stopped by three soldiers who pushed him against a wall for a ceremony of humiliation that included kicking him and stripping off his clothes. They demanded the names of his wife, sisters and mother and insulted these women with filthy epithets. They insisted that Mazen repeat these obscenities until he was finally reduced to tears. At this point, the soldiers burst into laughter.

Forcing Palestinians to undress is in fact a common practice, seen regularly at the airport and at the ubiquitous checkpoints. Security guards habitually place the headscarves and the shoes of Palestinian women in the same airport plastic bin for mechanical scanning. In fact, I once requested my shoes and headscarf be placed into separate bins to avoid dirtying my headscarf but was told that if I did not comply with “regulations” I would not be permitted to board my flight.

The internet provides frequent opportunities to expose Palestinians to shame and humiliation, such as the degrading practice of young female soldiers who pose with blindfolded and handcuffed elderly Palestinian men and post these pictures on social media.

These omnipresent acts of personal humiliation are not simply collateral by-products of occupation, but its core policy. An essential feature of the occupation is to target and undermine every facet of Palestinian identity, especially those aspects of identity that are a source of pride for the emerging intellectual and moral development of a Palestinian nation. Humiliation acts to crush the sources of autonomy and independence. It aims to reduce Palestinians to a state of passive silence. At the same time, humiliation of Palestinians is a tool that relieves the anxieties and apprehensions of the Israeli forces and their beneficiaries among the Israeli public.

A yet more painful face of humiliation is experienced when our leaders are pushed to villainy and subservience to Israel. The surrender of the Palestinian leadership to Israeli aggression undermines the strength of the Palestinian people in psychological ways as well as in its concrete effects upon economic production. Such Palestinian leadership projects to the world an image of weak beggars deserving only mendacity and lends a hand to efforts to prosecute Palestinian resistance and opposition, while exhausting the resources of the Palestinian population with fees, taxes and loans. And in the midst of these harms, the Palestinian Authority sent a delegation of 15 high-profile members led by Muhammad Al-Madani, a member of the PLO Executive Committee, to “enumerate the merits” of the deceased in a condolence call to the family of Munir Ammar, the head of the Israeli Civil Administration that had been responsible for supporting the illegal settlements in the West Bank!

These stories should be told, but they are often not.

Recently, Israel’s representative at the United Nations was elected as chairman of the UN Legal Committee on the very week of the anniversary of its illegal occupation of Palestinian lands in 1967 and despite its long history of contempt for UN resolutions and violations of international laws. Events such as these deny the Palestinian people the eligibility to articulate counterclaims on the world stage which report upon our experiences of injustice and humiliation. These events render us more vulnerable to the narrative that our humiliation is necessary, appropriate and just.

It is an unfortunate fact that humiliation sets psychological factors into motion which further impair and harm the humiliated. The emotions of a humiliated person don’t stop further humiliation from occurring, quite the contrary. Many humiliated persons become exquisitely attuned to the feelings and expectations of the perpetrator and vigilantly avoid recognising their own rage. There may be impulses to identify with the perpetrator and to justify the humiliation of others who proudly resist it. We see these dynamics in Palestinians who justify the humiliation of those who dare to resist the occupier; we see these dynamics in those who blame others who complain of humiliation, claiming that these victims are merely vulnerable or weak personalities, as if the experience of humiliation had taken place only in their heads rather than in reality.

From a psychological perspective, the experience of humiliation is highly pathogenic. It undermines the self and leads to states of impotent rage. Indeed, when patients present to a mental health clinic with diagnostic profiles of major depression, anxiety, or even suicidal tendencies, there are often stories of humiliation behind these symptoms. Humiliation can also lead to intense active anger; powerless in the face of the perpetrator, the victim may view anyone as a representation of the “other”. Through group activation of these dynamics, we see a vicious cycle of revenge on the humiliated community itself through the perpetuation of further humiliation and violence; I’m writing these lines just after the killing of five Palestinians today at the hands of Palestinians in Jenin and Nablus.

Humiliation restricts the capacity to trust and to grow. In this way, the tyranny and humiliation that protect the occupation tend to diminish the trust and cooperation between the Palestinian community and its members to the narrowest organic level; the family, the tribe and the political party. This narrowing of the circle of social inclusion often leads to antagonism and black-and-white thinking. These impulses towards revenge are born from humiliation and inequalities of circumstance, not innate or cultural factors. We see these elements at work in Palestine following the elections of 2006, when the process of constructive political evolution was reduced to rubble due to, among other causes, political factionalism and polarisation. Thus Israel was able to erect its flags of victory over the defeated Palestinian collective cause. These dynamics were at play in the forces that resulted in the separation in Gaza nine years ago. Experiences of humiliation change the fabric of society, creating new social facts which are not easy to erase from history; they are recorded in the soul, in memories, in fantasies and in the formation of new social structures.

The therapeutic interventions that prevent people from running away from their stories and help them to comprehend the power dynamic are interventions which reframe the experience in a new appraisal. In therapy, the individual’s capacity to generate a counterclaim is identified, fostered and exercised. The development of a personal counterclaim is a key to restoring the individual’s ownership over his own life and its purpose.

It is often necessary to explore in great detail the victim’s experiences and to recreate the narrative of events. Having clarified the events, it is possible to then examine how the victim understands the mind of the perpetrator: why did the perpetrator need to humiliate, coerce, degrade and violate the victim? When these questions are pondered, the victim often can appraise the perpetrator from the inside out as insecure, anxious, perverted and greedy. The coloniser is seen as bolstering a pretended status in front of the “natives”, a fantasy requiring the coloniser to debase and objectify them. From this perspective, my patient Mazen came to recognise that the Israeli soldiers perceived him to be a masculine and protective husband, and that they then experienced anxieties about their own manhood; their envy and resentment of his adequacy found an outlet in forcing him to enact an obscene betrayal of his wife, mother and sister.

The cause of Palestinian liberation likewise requires a reframing of humiliation in both an individual and a national level. Liberation requires active participation, commitment to the principles of equality and political development. It requires a moral and a cultural maturity that are capable of understanding and containing impulses for revenge. Liberation requires the abandonment of policies of exclusion, deprivation, or submission to tyranny which crushes resistance through inducing passivity or inducing vengeance and social fragmentation. Out of experiences of humiliation and through our insight into these experiences, Palestine can forge a liberated identity focused on human rights and human dignity.

Samah Jabr is a Palestinian psychiatrist who cares about the well being of her people beyond issues of mental illness. She finished her training in psychiatry in France