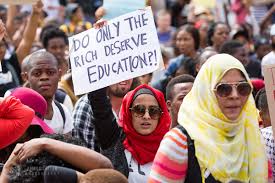 As an organisation committed to fighting colonialism and forms of domination flowing from it, Media Review Network (MRN) supports the fundamental objective of the Fees Must Fall (FMF) movement: the provision of free, decolonised, quality, higher education at campuses that reject cultural imperialism and racism flowing from coloniality.

In resisting the corporatisation of higher education (where knowledge is sold as a commodity only to the privileged) FMF – like the Occupy and Black Lives Matter movements in the United States and the Palestinian struggle against Apartheid Israel – is part of a larger, international struggle against the many faces of racism and colonialism.

FMF is also a reflection of other crises in post-1994 South Africa, and cannot be separated from the  current struggles for quality basic education, healthcare, water and sanitation, housing, employment, public transport, electricity and the provision of basic services. MRN, therefore, rejects the criminalisation of the FMF movement and its leaders, by the government’s police forces.

Scenes of students being hunted and arrested, and reports of protesters being fired upon with rubber bullets, live ammunition, stun grenades, and Israeli-sourced water cannons are reminiscent of the Apartheid government’s response to student protests.  University management’s deployment of private security forces, ill-equipped to handle protests,  has further exacerbated the crisis. This violent suppression of student protests also raises serious questions about whether students can enjoy freedom of expression during future campus-based mass actions and activities.

Attempts to trivialise and depict FMF as a new, violent and criminal phenomenon must be rejected. Since 1994, there has been ongoing, overwhelmingly non-violent, protests by students and some academics in response to the chronic underfunding of higher education. Focusing only on criminal and political opportunists looting stores and burning buildings belittles this long-standing student movement and diverts public attention away  from the original objectives of the FMF movement: opening the doors of learning to all.  In this regard, strong leadership and discipline is required from students who must stand firm against the infiltration of criminal and violent elements, factionalism, fragmentation, and political manipulation of their justifiable movement – all of which diminishes FMF’s legitimacy in the eyes of the South African public.

The root cause of the student protests lies in the office of President Jacob Zuma, and is compounded by the current political crisis in government. Students cannot be blamed for this crisis, neither are they ultimately responsible for its resolution. While university management’s role in the militarisation of campuses has aggravated the protests, it must be recognised that they, too, have no power to change the underlying structural conditions responsible for our higher education crisis – only the government does.

Our attention must shift away from students and university management to the authorities who brought us to this point. The government’s Fees Commission set up in January 2016 lacks transparency, is unfocused and slow, and its completion date has now been shifted.  Rather than demanding answers from student leaders, we must demand that the government work together with students, management, academics and all other stakeholders in an atmosphere of mutual respect and good faith, with concrete time-frames, to achieve free education for all.

Nelson Mandela reminded us that “it is through education that the daughter of a peasant can become a doctor, that the son of a mineworker can become the head of the mine, that a child of farm-workers can become the president of a great nation.”  The core of FMF is based on this premise, and our country’s future is dependent on it.  However, this can only be achieved through strong leadership by all key stakeholders – supported by civil society – and with political will from government.