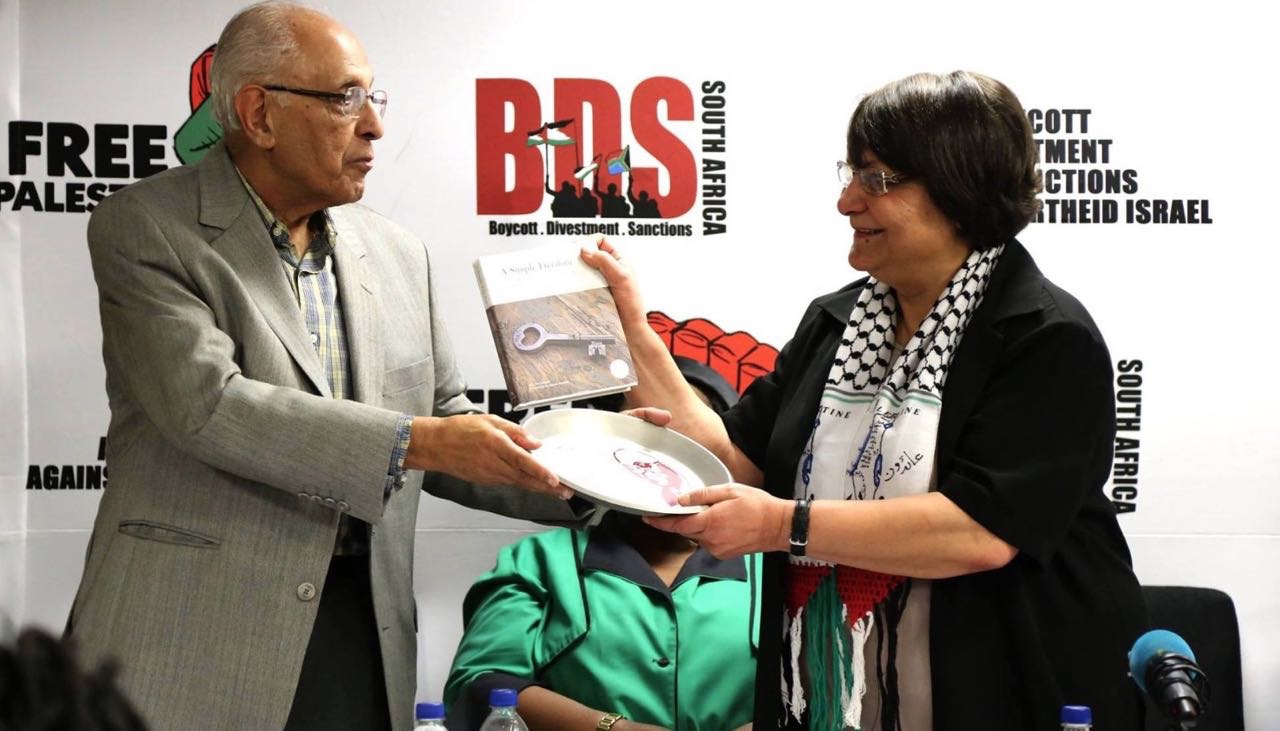 A giant of South Africa’s freedom struggle has fallen.

Ahmed Kathrada (87) passed away peacefully after a short period of illness, following surgery to the brain.

“This is great loss to the ANC, the broader liberation movement and South Africa as a whole. Internationally, he was staunch in his support for the Palestinian struggle. ‘Kathy’ was an inspiration to millions in different parts of the world,” said Balton.

As South Africa mourns his passing, condolence messages are pouring in from around the world. Tributes reflect the deep love, respect and admiration he enjoyed from fellow struggle veterans as well as ordinary people whose lives he touched so profoundly.

Fellow Robben Island prisoner, Laloo ‘Isu’ Chiba (86) said that his comrade’s death has left a deep vacuum in his life.“I have worked with Kathy for over sixty years. He has been my strength in prison, my guide in political life and my pillar of strength in the most difficult moments of my life. Now he is gone,” said a visibly shaken Chiba.

Nelson Mandela, who affectionately referred to Kathrada as Kathy, had a long association with him. Throughout their political trials and tribulations which included close to three decades in jail, Mandela often reminisced about Kathy’s strong opinions, sharp insight, great humour and humanity.

In a press release providing summary of his life of struggle, the Kathrada Foundation records that he was born on 21 August 1929 in rural Schweizer-Renek. His induction into political struggle saw him at the tender age of 17, participate in the 1946 Passive Resistance Campaign led by the South African Indian Congress. He was part of 2000 resisters who were arrested and imprisoned for defying a law that discriminated against Indian South Africans.

During 1952, Kathrada was in a group of 20, including Mandela and Walter Sisulu, who were sentenced to nine months in prison with hard labour – suspended for two years – for organising the Defiance Campaign against six unjust, apartheid laws.

In 1954, Kathrada was placed under restrictions by apartheid security police and was arrested several times for breaking his banning orders. In 1956, he was among the 156 Congress activists and leaders charged for High Treason. The trial continued for four years after which all the accused were acquitted. Kathrada, Mandela and Sisulu were among the last 30 to be acquitted.

While they were on trial in 1960, the ANC and PAC were banned.

In 1962, Kathrada was placed under “house arrest”. The following year Kathrada broke his banning orders and went underground to continue his political and military work in the ANC’s armed wing, Umkhonto we Sizwe (MK).

In July 1963, the police swooped on Liliesleaf Farm in Rivonia, a Johannesburg suburb where Kathrada and other banned persons had been meeting secretly. This led to the famous Rivonia Trial in which eight accused were sentenced to life imprisonment with hard labour on Robben Island. His fellow prisoners included ANC leaders such as Mandela, Sisulu, Govan Mbeki, Raymond Mhlaba, Denis Goldberg, Elias Motsoaledi and Andrew Mlangeni.

Kathrada spent 26 years and 3 months in prison, 18 of which were on Robben Island.

Kathrada embraced many global causes and was especially concerned about the oppression faced by Palestinians. His voice in support of their justice and against Israel’s apartheid was heard across all the Occupied Territories and deep into the miserable refugee camps of displaced Palestinians.

Notwithstanding smear campaigns by South Africa’s pro-Israel lobby, which spared neither him nor Archbishop Desmond Tutu, Kathy displayed the same resolute determination to oppose Israeli injustice as he did to oppose racism and apartheid in South Africa.

In a message addressed to MRN’s Suraya Dadoo to acknowledge and endorse our groundbreaking publication WhyIsrael?, Kathy unhesitatingly penned it as follows: 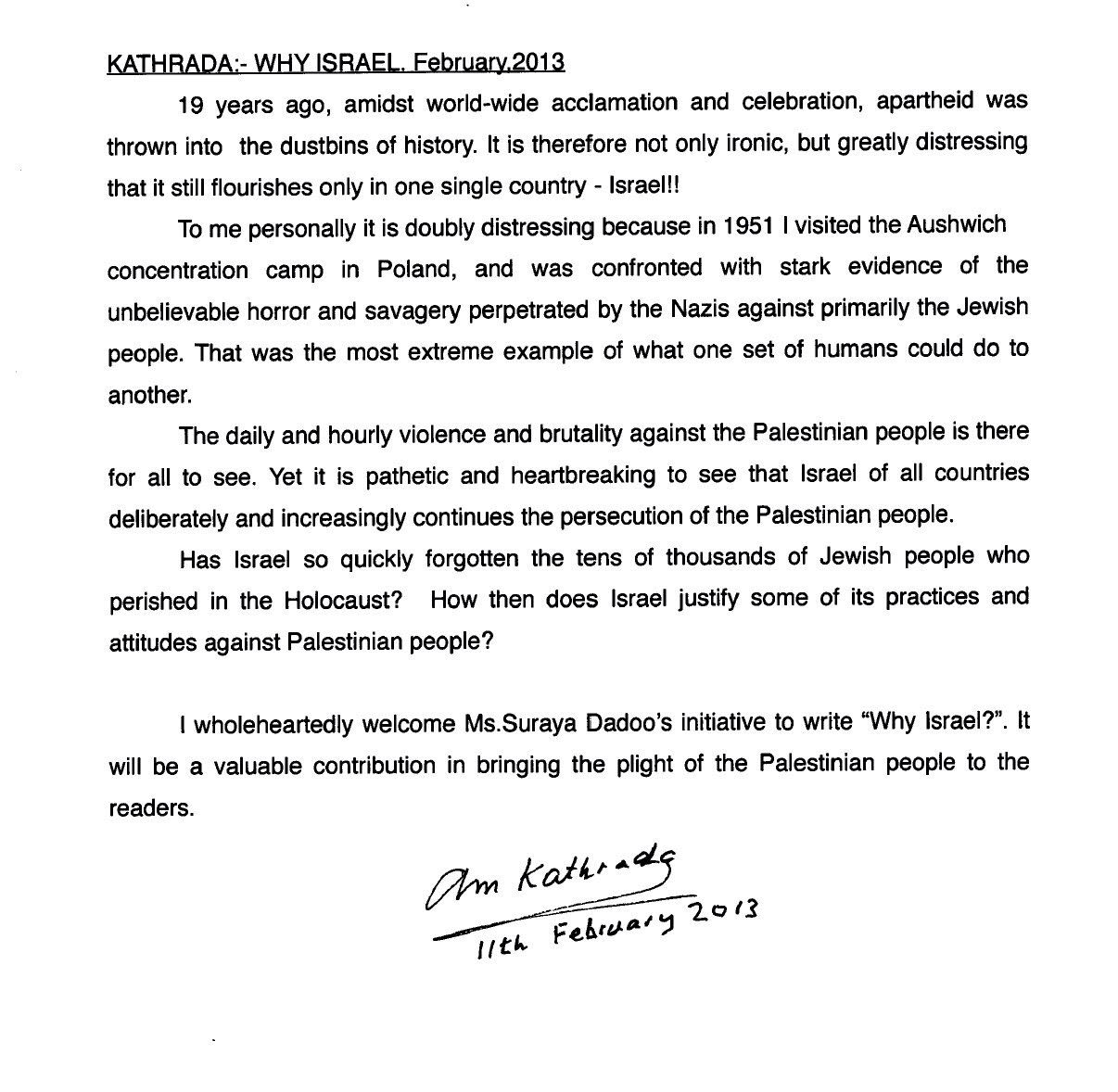 We at Media Review Network are deeply saddened by his passing and share the deep sense of loss and outpouring of grief by people from all walks of life.

Kathrada is survived by his wife, Barbara Hogan, also an ANC stalwart and veteran.