Is it about Qatar or Israel’s existence? : Analysis of the situation #QatarCrisis 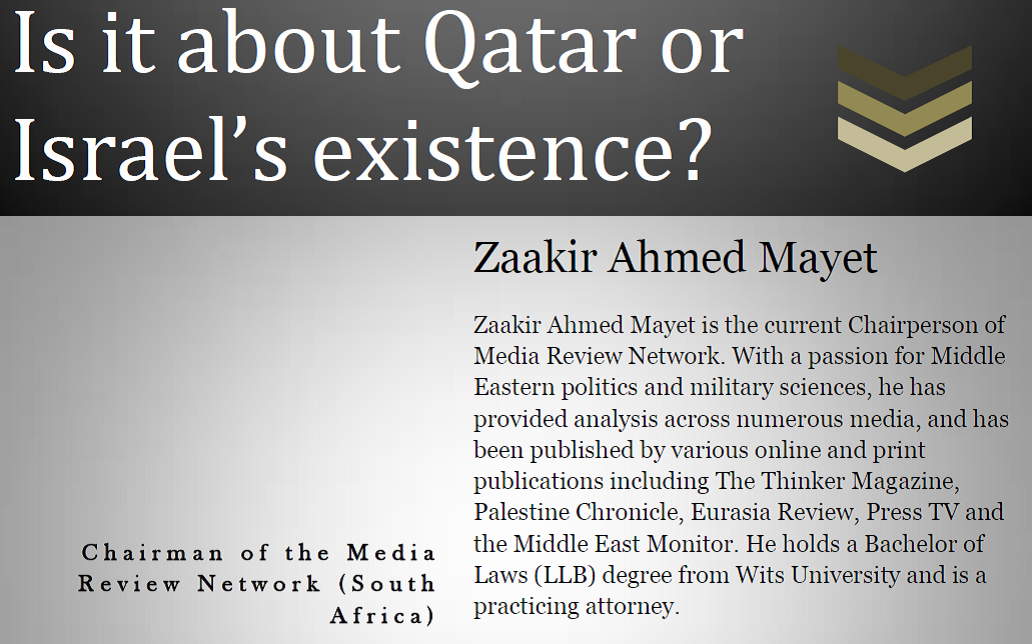 The overview below seeks to provide a clear picture of the forces which have motivated the recent actions against the Gulf State of Qatar. Contrary to much of the current discourse, it is argued that the genesis of the actions are not to be found in the Gulf but in the State of Israel. The analysis below first discounts the accusations against Qatar which have served as a means to justify Gulf Cooperation Countries’ drastic measures. The second part of the analysis takes a brief look at the history of Sykes-Picot which provides the current framework upon which the United States, Israel and the Gulf States are anchored. The term hegemony is used interchangeably, whether rightly or wrongly, to denote Western interests as well as those of Israel and the United States. Furthermore, Israel is to be viewed as a projection of Western and US interests in the region. The tools of hegemonic control, i.e. destabilisation via proxies and invasions, are also sketched out and which become crucial in understanding Syria’s role later on. The argument put forth is that the very foundation which ensured the existence of the GCC is intrinsically connected to Israel. If Israeli hegemony collapses and the State faces an existential threat to its existence, so too does the GCC. The analysis exposes the close connections between the Gulf culprits of the current Qatar row and the State of Israel. The adoption of Israel’s interests as the GCC’s interests demonstrates the dependency of the GCC on the hegemony but also the duplicity of the Arab states in relation to the issue of Palestine. The analysis, therefore, moves to focus on the threats faced by Israel which are the lynchpin of the GCC and their continued existence. The picture is sketched from largely Israeli and US sources that the very bedrock of Israel, i.e. its deterrence capacity, had collapsed due to its defeat at the hands of the Hezbollah. The situation progressively got worse not only endangering Israel but also by implication the existence of Israel’s dependents, the GCC. The analysis focuses on the military encirclement of Israel by Hezbollah and Hamas. The timeline runs between 2006 and 2017 in which the growing threat of a liberated Palestine looms. The picture of Israel, its future existence as a Zionist, apartheid, colonial, settler state, becomes critical in the space of 2016 – 2017 particularly due to Hezbollah. The analysis takes a step back to examine what the critical tipping point was for the change in Israel’s calculation of existence. It is argued that the Syrian conflict was meant to embroil the Assad regime in civil war and destabilisation by hijacking a legitimate revolution. This would have effectively weakened Hezbollah, Hamas and Iran. The equation changed drastically when sudden Iranian, Russian and Hezbollah intervention occurs. This links to the preceding portion which details how the Syrian theatre of operations did not weaken the axis of resistance (Al Mukawama – Iran; Syria; Hezbollah and even Hamas) but strengthened it. The developments caused panic in the Gulf and particularly Israel. These developments, when viewed in context, explain the openness surrounding previously clandestine ties with Israel in recent months as well as the current Qatar crisis. It is argued that the Qatari situation, despite the internal dynamics of the GCC, is not spurred on by domestic rivalry but a tangible threat to the very frameworks upon which GCC+1 (Egypt) and hegemony are anchored. Qatar is a small test to determine if sectarian rhetoric promoted by the GCC+1 was successful in splitting two powerful Islamic powers: political Islam (Ikhwan) and resistance Islam (Al Mukawama). The jury has returned and the verdict is out: the joint efforts between Iran and Turkey spell disaster for the GCC+1 and Israel. Pressuring Qatar, a small country with links to both Ikhwan and Al Mukawama has revealed a mega bloc significantly magnifying the threat faced by the monarchs, tyrants and the hegemony. Ten months before the Qatar siege, Israel and the United States policy makers, key military figures and analysts had extensive conferences to discuss the collapse of the hegemony and the danger of the emerging blocs of Ikhwan and Al Mukawama. What was not clear was whether or not an alliance would be formed between the two. Qatar was the answer to that question. The future of the Middle East is anyone’s guess. But the unbridled truth is that the entire geopolitical situation has an abstract link to the Gulf and a direct link to Israel.

May the Almighty accept this effort to expose the Truth. May the rights of the oppressed and forgotten be restored and may the forces which seek to cause harm collapse in the light of Justice. If there is any benefit, all praise be to the Almighty who taught us the use of the pen and gave us knowledge that we knew not. If there is any error I seek forgiveness and any error is but my own.

Author: Zaakir Ahmed MayetZaakir Ahmed Mayet has a passion for Middle Eastern politics and military sciences, he has provided analysis across numerous media, and has been published by various online and print publications including The Thinker Magazine, Palestine Chronicle, Eurasia Review, Press TV and the Middle East Monitor. He holds a Bachelor of Laws (LLB) degree from Wits University.