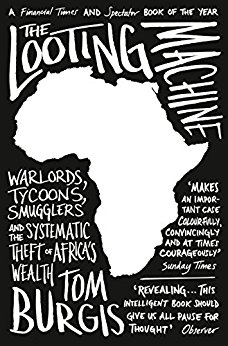 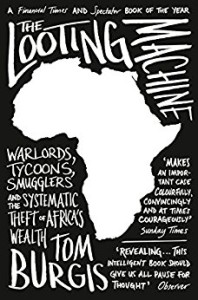 In this riveting book about the thieving nature of the state system, Tom Burgis provides a chilling investigative insight about how Africa’s resources are being siphoned from Africa, to benefit only corrupt leaders of various governments and their families and to benefit only those closely associated with leaders who are in power. According to Burgis, post-colonial Africa has produced the longest serving leaders who intimidate opponents before elections and/or rig elections in order to stay in power. Teodoro Obiang Nguema of Equatorial Guinea, Jose Eduardo dos Santos of Angola, Robert Mugabe of Zimbabwe, and Paul Biya of Cameroon have rich oil and minerals in their respective countries and yet their combined rule has been over 130 years while their citizens live in poverty, massive unemployment and high inequality.

With the initiation of modernity and globalisation by the West, various intricate methodologies through foreign owned companies are being utilised as sophisticated networks to loot resources from the African continent. These modern forms of engagement often labelled under the discourse of International Relations and globalisation are reflective of the colonial project where Europe set on a worldwide mission of exploiting the resources and wealth of Africa while using native Africans as slaves and more recently as cheap labour to develop their own Empires, leaving Africa poor and underdeveloped. African countries and their leaders, at the so-called end of colonialism found themselves adopting a foreign state system that was designed for their underdevelopment and the impoverishment of their people and thus assumed the thieving nature of the modern state system. In this book, Burgis narrates the manner in which these countries assumed the nature and character of their oppressor and subjected their people to the same conditions as a result of abusing state machinery.  After the defeat of UNITA rebels in Angola, the ruling elites led by dos Santos converted to crony capitalism by converting few families into what’s known as Futungo. This was the privatization of power only to the select few families. Various contracts such as construction are being used for embezzling public resources. In the case of Angola business ventures and activities are a highly protected secrecy which is actually given a term ‘cryptocracy’ – a system of government in which the levers of power are hidden.

Ethnic violence and interests of various multinational companies that are looting in the Congo compound the Democratic Republic Congo (DRC) and its neighbouring countries in the great lakes. Mining multinationals from Canada, USA, Europe, Australia, South Africa and China have operations in one part or the other of the Congo. More than eighty percent of these minerals don’t even benefit people of Congo, but instead the country is infested with interests of multinational companies. Owners of these multinational companies use rebel forces to annex Congo for mining minerals. The coloniality of power that has engulfed African countries such as Congo have left them politically weak and prone to ethnic conflicts that are a result of ethnic divisions sowed by the colonial masters. The entrenchment of ethnic conflicts in many parts of Africa have meant that MNCs are able to loot and exploit African countries and further deepen the crisis by providing assistance to the growth of rebel groups to maintain instability. Rebel forces are heavily armed and they do everything in their power to fight communities and any other person who encroaches on minerals being mined in various parts of Congo i.e.: Goma, North Kivu, Kilwa. In cases where foot-soldiers of these networks cannot get what they want, they become so brave to fund mercenaries and rebel soldiers to annex one part of the country in order to have access to raw material like how rebels were utilised to mine crude oil.

Some of the leaders who are struggling with generating revenues for their countries are being ‘bought’ in exchange for mining natural resources which are basically sold off at a fraction of the prices they should be sold for like the minerals of Niger. China is mainly responsible for corrupting leaders by making unofficial deals and providing cash to leaders in exchange for few projects that have never been more than 10 billion dollars. Chinese companies flatly collapsed the textile industry of Nigeria by allowing cheap imports to be smuggled into Nigeria. As a result, many textile factories, which were thriving, collapsed. Nigeria is rich with crude oil yet it cannot produce enough electricity to supply its citizens. Thus it because very expensive to produce garments in Nigeria and the only option was to smuggle textile imports to Nigeria. The smuggling of these textiles is worth more than two billion US dollars annually, which benefits only a handful of smugglers within Nigeria. After the discovery of oil in Nigeria by the Dutch companies, there was a boom in various other sectors and it became Africa’s biggest economy. However, the oil industry in Nigeria was highly monopolised and controlled by a handful multinationals and Nigerian politicians. These politicians would divide the oil proceeds amongst themselves and their cronies in order to maintain political power, which proved to be very expensive, and when people from oil rich sections of Nigeria started noticing then conflicts in various parts started flaring up.

When China opened up for new markets because it was struggling for resources, it targeted African countries. China’s economy was eight times bigger in 2012 than it was in 2000, and demand for commodities rapidly outstripped China’s own resources. China utilised highly effective intermediaries who could access dictatorial and ‘kleptocratic’ leadership of the targeted countries. However, these individuals (middlemen) firstly enriched themselves by creating deals first with dictators and ‘kleptocrats’ then the rest would follow. These middlemen utilised what is called ‘guanxi’ – which is ideas of connections or relationships or networks. People like Sam Pa are the ‘guanxi’ tools of China, in East Asia, Africa and other parts of the world. Sam Pa could enter terrains, which other people avoided. He is still very effective in doing that, first for himself and then for others. Sam Pa has been the most effective tool of China’s looting machine. He has been highly effective in all parts of Africa, South, East, and West. He has expanded his own empire and his footprint of influence.

The modus operandi of ‘futungo’ and ‘guanxi’ are almost similar if not the same. Their sphere of influence expands with each day passing. Whether African states are stable or conflict ridden, according to the book multinational continue to thrive both ways. Such practice is a closely guarded secret and it is highly protected because there is just too much at stake for rebels leaders, kleptocratic leaders and many foot-soldiers doing dirty work for their handlers. The book is a revelation of the dark underworld of the leaders of the world with double standards because though they publicly pronounce the love for their countries, in practice it is totally different.

Nwabisa Sigaba
Nwabisa Sigaba is a Postgraduate Student Assistant at Unisa in the College of Human Sciences. Her research interests are around Decoloniality, Racism, Student and Workers Politics as well as Critical Islamic thought. She is busy with her Masters degree in Development Studies focusing on the role of Student movements in SA

Latest posts by Nwabisa Sigaba (see all)
Share this on WhatsApp

Author: Nwabisa SigabaNwabisa Sigaba is a Postgraduate Student Assistant at Unisa in the College of Human Sciences. Her research interests are around Decoloniality, Racism, Student and Workers Politics as well as Critical Islamic thought. She is busy with her Masters degree in Development Studies focusing on the role of Student movements in SA