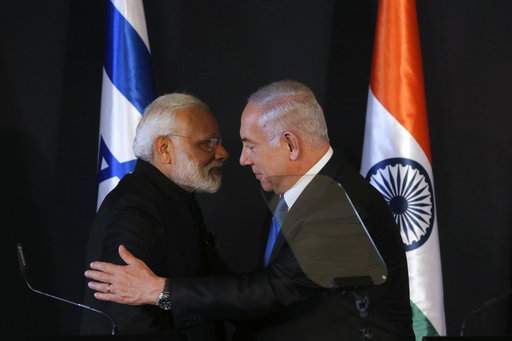 Observers and analysts of political trends in India since the defeat of the Congress Party at the hands of an extreme rightwing movement, the BJP, will not be surprised by recent turn of events related to Israel.

The much-heralded visit by Narendra Modi to Israel was to be expected, is what they would conclude. Reasons are obvious: BJP’s ultra-nationalist and dogmatic ideology shares an affinity with Zionism and the political elite led by Benjamin Netanyahu.

The convergence between the two, which had been in the making during Modi’s tenure as Chief Minister of Gujarat, has come full circle. Economic and political ties were incubated decades ago targeting the hub of India’s diamond industry located in Gujarat’s main trading port Surat.

Intelligence sharing and the strengthening of Modi’s political capital which lead to his election victory has been a trademark of Israel’s strategic planning. It’s a debt Modi and the BJP knew will keep his government beholden to Israel.

Thus descending from his plane into the arms of Netanyahu, affirmed Modi’s eternal indebtedness to a country which ironically had been the target of isolation during the early 1950s following India’s independence.

India which stood out then as a leading member of the Non-Aligned Movement (NAM) in opposition to the colonisation of Palestine and South Africa’s apartheid regime, seemed to be a distant memory as Modi strutted along the lavish red carpet in Tel Aviv.

Overnight and in a flash, that history vanished. From being a firm supporter of the freedom struggle waged by Palestinians, India today has adopted an arrogant and hostile stance which pits it not only against Palestine, but also against its own founding values.

Modi and the BJP seem to have forgotten or chosen to ignore the imperatives which underpinned India’s freedom struggle against British colonialism: members of an oppressed population have no choice but to resist.

In fact, it is an internationally recognized right, as stated by the UN  in 1982:

“The General Assembly…reaffirms the legitimacy of the struggle of all peoples for independence….and liberation from…foreign occupation by all available means, including armed struggle.”

Cosying up to an Occupying power and at the same time disdainfully disregarding the legitimate rights of the Occupied people, is a reflection of how far Modi and the BJP have strayed from India’s legacy as a key component of anti colonial struggles.

Changing the narrative to airbrush the past do not alter the facts. Palestine is colonised and occupied. The coloniser has evolved over the decades as a powerful military force possessing nukes and enjoying the protection and patronage of America. It has turned the Arab frontline states as allies and dependent on its power for their survival. It has manipulated the liberation ideology by recasting it as “terrorism” and succeeded in getting America, the Western world and huge chunks of the rest of the world to believe that subscribing to armed struggle is tantamount to supporting acts of terror.

Modi is fine with such outrageous nonsense. In fact it suits him better than most other countries, for it allows him to continue the unjust occupation of Kashmir. Like Palestine, the population of Kashmir face a brutal military force. Resistance to Modi’s trigger happy bandits results in mass arrests, collective punishments, torture and death.

The India/Israel axis of colonial occupation is thus a lucrative means to profit from the arms trade. Weapons of mass destruction are the defining articles of “faith” shared by an increasingly belligerent group of regimes which include Saudi Arabia, Egypt, UAE and Bahrain.

That this quartet has publicly showcased its allegiance to Israel, emboldens Modi and his ilk to display disdain for the legitimate rights of Occupied people, whether in Kashmir or in Palestine.

Netanyahu may believe that he has outsmarted his foes, but as has been the final demise of apartheid and its architects in South Africa, he remains blissfully mistaken. Zionism and its colonial project Israel will face inevitable failure – with or without Modi at its side.