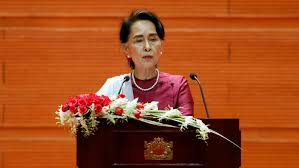 Her short speech, clearly intended to satisfy western backers, was a damp squib. Dubbed as an address to the nation, Suu Kyi failed to assure the Rohingya that the brutality and violence against them will not be tolerated by her. Nor did she announce that her government has halted all security and military operations in the Rakhine region and elsewhere to immediately prevent further violations by her forces.

Saying that she “feels deeply” for the suffering of “all people”, falls short of addressing the core issues, which centre on disenfranchisement. While her choice of words may provide a good “sound bite” for her western and eastern allies, it reveals a shameful attempt to remain detached from the victims of her regime’s military crackdown.

Her response came on the eve of the United Nations’ annual assembly of heads of states. Not surprisingly, she cancelled her scheduled appearance and opted instead to make her disappointing speech to a domestic audience but pitched at the international community.

Coming under increased pressure and facing criticism from fellow Noble Peace Prize laureates, Suu Kyi cannot but be aware that the horrific images of burned bodies, slaughter, rape victims, and wanton destruction of villages, has had a devastating impact on her integrity.

Nor can she feign ignorance about the harrowing details which to date has resulted in more than 400,000 Rohingya fleeing Myanmar to Bangladesh, escaping what the United Nations has correctly described as “ethnic cleansing”.

Journalists and human rights groups who have been barred from conducting independent probes in Rakhine State, have now descended on the makeshift camps in Bangladesh. Unfortunately for her, media and others including humanitarian organizations are able to document and provide first hand reports from the multitude of victims.

Horrific accounts of torture, rape and arson have shocked the world. The terrible brutality associated with violence by the Myanmar army and security forces led many influential human rights activists to condemn and deplore the Aung San Suu Kyi government.

As the world reacts with shock and horror, her inadequate speech will further undermine her credentials as a “democrat” who is in charge of a regime which has applied apartheid policies.

Her silence on the statelessness and deliberate policies which resemble a carefully crafted pogrom to wipe out the Rohingya, reveals a great deal of her complicity in the crimes.

Blaming the victims and implying that they are responsible for burning their own homes will not wash any longer. Analysts and researchers with a keen interest in Burmese politics have dismissed this as contrived propaganda. And so too have exiled leaders of the Rohingya.

Aung San Suu Kyi not only discredited herself and brought the Noble Peace Prize into disrepute, her arrogant state of denial raises questions about her commitment to democratic ideals.

It can be argued that the iconic fame she enjoyed during her period of persecution lies in tatters. The opportunity to salvage some of it has been wasted with her current lackluster performance. The tragedy endured by the Rohingya requires decisive action by a leadership that values life and justice. Aung San Suu Kyi has failed miserably on all counts and thus cannot be trusted to protect Rohingya Muslims.

Her ridiculous offer to “verify” Rohingya is apart from creating false hope, deeply insulting for it is akin to branding cattle in preparation for slaughter. A “verification” process is simply untenable! How on earth is it possible for a stateless population, deliberately stripped of their citizenship, whose homes and lands have been reduced to ashes, who possess only their bodies to be “verified”?

If she had entertained any notion that her speech would stifle and silence critics, Suu Kyi is mistaken. The images and real-life accounts of the world’s most persecuted people, will ensure that their narrative prevails.