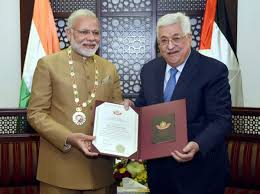 Indian Prime Minister Narendra Modi’s brief stopover in the Occupied Palestinian Territory of the West Bank has been hailed by parts of India’s media as “historic”. It is premised on what they tout as “the first ever Prime Ministerial visit to Palestine from India”.

Strangely the media interest seems to be generated by a debate about whether Jawaharlal Nehru’s visit to the Gaza Strip during 1960 qualified him to be the first. At the time Nehru as Prime Minister had met with his country’s troops deployed by the United Nations as a buffer following the 1956 Suez Canal war between Egypt and Anglo-French colonizers.

Whether Modi or Nehru was the first is besides the point. While some media houses in India may have reason to indulge in these irrelevant technical issues, the real story seems to have evaded them.

One is the surreal parallel in both visits which has to do with military control. In the case of Nehru’s trip it was related to the battle over the control of Egypt’s natural resource, the all important Suez Canal. As for Modi, his visit to Ramallah required special clearance from the Occupying Forces to permit a Jordanian helicopter to fly him in to the West Bank which is occupied by Israel.

The other points to “fence sitting” which is euphemistically described as “neutrality”. Both administrations i.e. Nehru and Modi are guilty of this. Nowhere has this been more pronounced than in Palestine.

Nehru’s UN plane was nearly blown out of Gaza’s skies when Israel’s menacing fighter jets flew dangerously close. Though he said that the threat posed by Israel was “unwarranted”, it appeared to have ended there. Important to note that at the time – 1960 – India’s recognition of Israel as a state was a decade old. And its  recognition of Palestine came only in 1988 – almost three decades later.

Fast forward another 30 years, we find Narendra Modi’s bizarre trip marred by Israeli checkpoints and military control, which he and his security detail would be aware of. Under these conditions of siege  usual protocol took a backseat for he had to rely on a helicopter from a third country to fly him across. Equally bizarre but not unexpected has been his muted acceptance of the apartheid conditions imposed on Palestinians by the settler colonial regime.

Again in keeping with India’s inglorious record of betrayal of Palestine’s just cause  – though it may surprise some people that an anti-colonial power such as India which struggled long and hard to rid itself of the British Empire would embrace imperialism two years after its independence  – Modi’s subservience to Israel confirmed it.

This is the substance of the debate which India’s media seems to have evaded: the hasty recognition of Israel while the fragrance emitted from the blood of Palestinian martyrs subjected to massacres and brutal ethnic cleansing swirled around the world.

And to extend the debate further, does the number of times India voted against Israel at the UN, constitute the only form of solidarity for victims of colonialism? The answer clearly is no. But recent conduct by the Modi government tells a different story. Cosying up to Israel’s rightwing terrorists and compromising the arts in the way Bollywood producers and stars were manipulated  – wittingly or not – reflects the obnoxious conduct of a regime, itself deeply implicated in gross human rights violations in Kashmir.

Which brings me to the final point which Indian media failed to interrogate: sharing pariah status with Israel. While the history of the two countries are vastly different and in conflict with their current alliance, does it not matter that both are headed by war mongers whose political careers have been defined by hate and intolerance?

India’s birth occurred by defeating British colonialism. Israel on the other hand credits its birth to the success of its colonial project.

To add to the confusion arising from the reason and nature of Modi’s visit, an official of India’s foreign ministry, Bala Bhaskar, made an equally perplexing announcement:

“This is a stand-alone visit. We have de-hyphenated our relations with Palestine and Israel and now we see them both as mutually independent and exclusive…”

“De-hyphenated”? This term is nothing more than an attempt to inject new adjectives in a narrative which leans towards the Occupying power. Whether deliberate or not, it signals how blinded Modi’s India is. Palestinian ghettos, or bantustans are a product of Israel’s fascist regime and to delink it from Zionism’s expansionist program by using terms such as “de-hyphenated” is both cruel and dishonest.

Quite disappointing that India, which boasts of a diverse and robust media, hasn’t displayed the aggressiveness its known for.

Being self-centered by focusing and celebrating “friendship” with an apartheid regime – as many media houses have done – is to confer legitimize crimes committed against the Palestinian population.

The expectation one has of India’s media is to dispense with irrelevant point-scoring about whether Nehru or Modi was the first Prime Minister to visit Palestine. Instead the message ought to be that Modi’s biased policies in favour of Israel cannot be reconciled with India’s freedom struggle against British colonialism.