GENERAL KHALIFA HAFTER: THE LESSER OF THE TWO EVILS IN THE LIBYAN CONFLICT 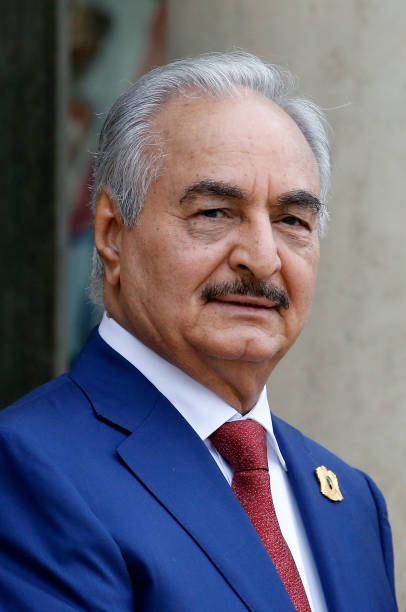 Since the assassination of Colonel Muammer Gaddafi in 2011, Libya has never known any peace. The country immediately plunged into chaos with different State terrorists, militias, both tribal and fundamentalists like the CIA/Mossad created ISIS and al-Qaeda acting with impunity and destabilizing the country. Gaddafi had ensured that peace prevailed amongst the different Libyan tribes during his reign.

The West is not really confronted with the immediate problem of which of the two rival governments in Libya is the lesser evil, for both political and humanitarian reasons. The choice, which is becoming increasingly clear because of the rapid rise of Islamic State (IS) in the Middle East and elsewhere, must be made in the context of the political and economic chaos in Libya. However, since General Hafter launched this latest attempt to capture Tripoli, some countries in the West have now openly switched sides in favour of the General.

One can start with a trivia question. How many Prime Ministers and governments can Libya have at one time? This disintegrating, indeed, failed state is continuing to suffer civil war, with some peace truces, among different rival communities. The primary protagonists are those loyal to authorities in Tripoli, and the internationally recognised government and elected parliament, the Council of Deputies in Tobruk.

The Libyan government, enjoys the loyalty of the Libyan Army led by General Khalifa Hafter who has launched an offensive against the Islamists in Tripoli. On the other hand, the Islamist Libya Dawn Coalition of militias and Muslim Brotherhood controls the rival Islamist government of the General National Congress based in the capital Tripoli, with its million and a quarter population. This alternative government has introduced Sharia law and harsh controls in its area.

This disjointed situation, in a country with less than 6 million people, resulted from the illegal overthrow of Muammer Gaddafi after 42 years in power. The collapse of his security forces and his death in October 2011, led to the rise of militias armed with weapons seized from Gaddafi’s store. A struggle, with violence and assassinations, ensued between the terrorists who had fought against Gaddafi on one hand, and a combination of liberals, nationalists, and tribal leaders, who were anti-Islamists on the other.

How did Libya get to this point? One aspect is certain. Like in most trouble spots around the globe, the role of the West and their allies in the region must not be discounted. At the time of the overthrow of Gaddafi the airspace above Libya was declared a no fly zone by the UN. This meant that only military aircraft with special permission could use the space. The rest is history. Gaddafi was apprehended and killed. The country became a free-for-all zone. The oil deposits became the property of the French, Italians, and other European countries. The US and Israel became active participants of the frenzied looting spree which has left Libya with the unholy tag of being a failed state.

The United States has voiced three opinions to the current status quo in the Libyan Crisis. One was expressed by Secretary of State Mike Pompeo, who condemned the actions of K. Haftar and called for an end to the offensive. The second opinion is that of President Donald Trump himself, who had a telephone conversation with the field marshal and expressed his support for the fight against terrorism, which many observers took as an endorsement of Haftar’s military campaign. While Trump will certainly have the last word, it is unclear which of these approaches to the events in Libya will eventually prevail in Washington. The third scenario that should not be ignored is that of the Pentagon, which has developed relations with the Misrata brigades against the background of the fight against Islamic State terrorists in Libya. It was Haftar’s military operation that opened the door for their increased activity. While the United States Africa Command (AFRICOM) may have withdrawn its personnel from Tripoli and Misrata, it is entirely possible that they will return to Libya and resume interaction with their former partners.

Russia continues to maintain relations with both sides in the Libyan conflict. Despite the increasingly pro-Haftar bias in the Russian approach, Moscow, unlike Saudi Arabia, the United Arab Emirates and Egypt, has not crossed the red line and continues to be regarded as a partner by the Government of National Accord. The problem lies in the fact that the three Russian structures that are currently working on the Libya track, the Ministry of Foreign Affairs, the Ministry of Defence and the Russian Contact Group for Intra-Libyan Settlement — assess Russia’s priorities and interests in Libya differently. On some issues, the Russians have opposite positions. On top of this, the signals coming from the Kremlin itself about which line to take regarding Libya are not clear enough. The Russian approach to events in Libya is likely determined by the current situation. Russia has demonstrated a certain amount of support for General Haftar against the background of his military operation and the success he is expected to achieve. However, as the operation proceeds, Russian will have to either return to a more balanced line and pay more attention to the interests of Tripoli or, on the contrary, start increasing aid to General Haftar, including military assistance.

The latter scenario is the riskiest. Even if the gamble on General Haftar pays off and he somehow manages to emerge victorious, then the main beneficiaries will be the “troika” of the United Arab Emirates, Saudi Arabia and Egypt, which have invested more money in him than Russia. At the same time, Russia would benefit from maintaining a certain balance in Libya. To this end, Moscow could make better use of the ties that it has managed to maintain with all the sides in the Syrian conflict — something that Egypt, the United Arab Emirates, and Saudi Arabia, who have “put all their eggs in one basket,” cannot say. Russia can play the role of mediator in the conflict, joining France and Italy in these efforts. Russia should also pay attention to those figures in Libya whose influence continues to grow against the background of the events taking place in Tripoli and who can play a consolidating role in the future. Major General Osama al-Juwaili is one of these figures.

However, from a political standpoint, General Hafter stands a good chance to stabilise Libya and save it from the current quagmire that it finds itself in. If he can, soon, extricate himself from the influence of some of his backers, Libya could emerge as one of the most democratic and prosperous North African countries.