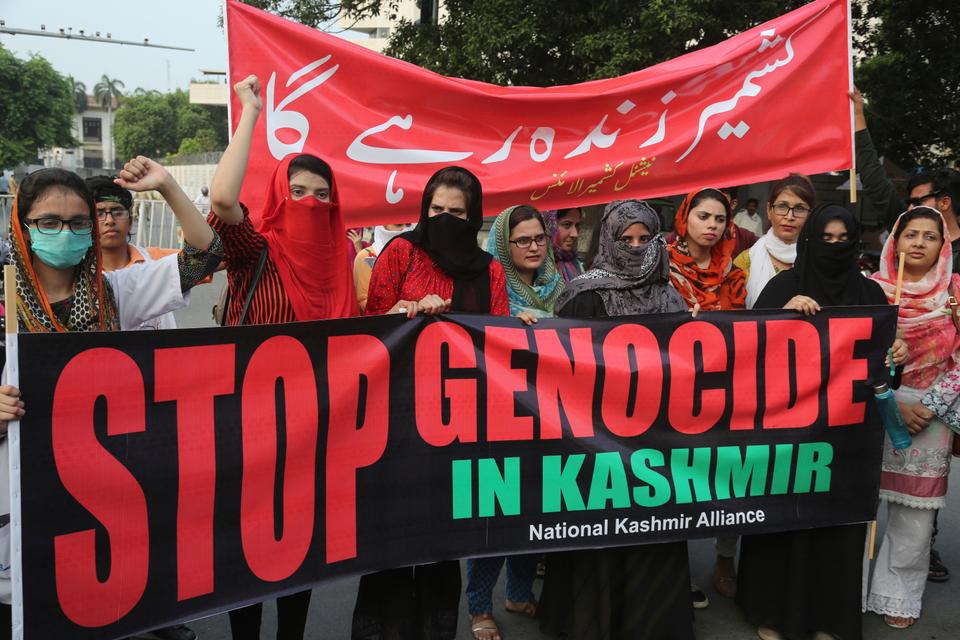 All it took was a blink of an eye to realize that India’s right-wing government outmanoeuvred old-style colonialism by repackaging it as “democracy in action”.

Whether described as a double takeover or colonialism squared, the fact is that the governing BJP, Bharata Janata Party, has given effect to subsume Indian Occupied Kashmir.

And in true tradition of the erstwhile colonisers of India, the British Raj, Narendra Modi’s government resorted to using fork-tongued language in order to justify its colossal crime.

Describing Article 370 of the Constitution the “root cause of terrorism” and blaming it as regressive and blocking “development” in Jammu and Kashmir, Modi’s BJP chief Amit Shah bulldozed it by revoking it. With its abrupt abrogation, Indian Occupied Kashmir no longer enjoys the status it had hitherto.

In other words, the teeming millions of its population who to date had opposed efforts by successive Indian governments to prevent the implementation of UN resolutions on a plebiscite, have effectively been captured as prisoners.

Dispossessed, silenced, imprisoned and dejected for being held in limbo without any recourse to access the protection of the UN or any other country, the powder keg lit by the BJP regime, is likely to explode with devastating consequences.

While Modi and his para-military RSS thugs along with BJP fanatics are celebrating this crude move, it must be noted that many human rights movements within India have adopted a tough stance by opposing it. Along with other critics within the country’s mainstream media, they do so at the risk of being ostracized as unpatriotic.

As debate rages on in India and elsewhere, particularly Pakistan, social media trolls in support of the BJP, have evidently become intolerant, harsh and scathing. Vile, rude and disgusting memes have begun to spring up, suggesting that their efforts to whitewash the intended obliteration of Kashmir, is orchestrated.

The pattern of attacks have become routine, i.e. to justify the clampdown of Kashmir, follow Israel’s lead by conflating resistance with “Islamist terrorism”. The vocabulary used is straight out of Benjamin Netanyahu’s hymn sheet. That it stinks of Islamophobia is reflective of Modi’s rise to power: from the ashes of anti-Muslim Gujarat pogroms as its chief architect to the dispossession of Kashmir.

Anti-Muslim bigotry is being disguised in language which stresses India’s “nationalism”, implying that the ideological basis of BJP being an extreme version of Hinduism is the ultimate political goal. Known as Hindutva, it is far removed from a secular democracy. Yet by using the instruments which are on offer to the BJP, the Modi regime has struck a fatal blow to Kashmir.

Overnight, the Valley has been plunged in doom and gloom. Tens of thousands of Indian troops have been mobilized to join the most militarized piece of real estate on earth. Cut off from each other and the outside world due to Modi’s arbitrary suspension of the internet, and additional measures which restrict movement, the Occupied Kashmiris face relentless ongoing persecution.

It is thus not surprising that RSS supremo Mohan Bhagwat and his second-in-command Bhaiyya Joshi congratulated the government for “this bold initiative which was very much necessary in the national interest…”.

Indeed it’s a reaction to be expected as the war of words escalates between arch-Hindutva paramilitary forces linked to the BJP via RSS and human rights movements .

Kashmir’s freedom struggle has taken on various contours during the last seven decades. Though many of its leaders have been imprisoned, banished or executed, successive generations continue to this day in their quest to gain freedom. In many ways their struggle is mirrored in Palestine.

Echoes of Kashmir’s pain, suffering and humiliation can be heard across all the Occupied Territories from Gaza to South Lebanon. And no matter to what extent Modi follows in Netanyahu’s footsteps to silence the persecuted millions, their cries will be heard.

And though the corridors of power in Western capitals may pretend to be insulated from Kashmir’s agony, their culpability in crimes resulting from their prized military industrial complex will loom large over their heads.

Neither Netanyahu nor Modi are free to act with impunity except with the “blessings” of the United States of America. That these two warlords have and continue committing gross human rights violations, without any regard for legal imperatives which define rights and obligations, reveals the extent of their contempt for international conventions.

Dumping Article 370 is Modi’s latest act of defiance. Will he be compelled to reverse and reinstate Kashmir’s right to a plebiscite, is a question many may ask. The answer unfortunately is an emphatic NO. None of his allies – including South Africa, Saudi Arabia and Russia, are likely to intervene.

Kashmir’s woes are a tragic reality of how skewed international relations have become. It reflects an endemic corruption that has infested global politics and an unwillingness by power brokers to enforce justice.