Trump’s “Deal of the Century”: Another Round of Apartheid Crumbs 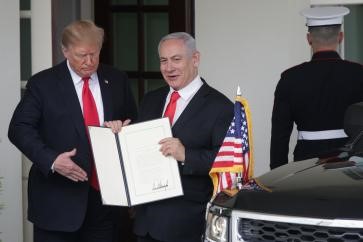 Undoubtedly masses of Palestinians in the Occupied Territories and millions of their compatriots living in squalor as refugees across the Arab world, would be appalled if not livid that the Trump administration has announced a process to extinguish their legitimate rights by gifting the occupying colonial regime with its so-called “deal of the century”.

Having previously and in utter contempt of a number of UN Security Council Resolutions, handed to Israel complete control of Jerusalem and Syria’s Golan Heights, Trump has now stripped Palestinians of all rights.

Rights including the Right of Return of Palestinian refugees; right to freedom; right to justice; right to equality and dignity, which are all sacrosanct, have just been trampled under by Trump in collusion with an over-zealous Benjamin Netanyahu.

Unsurprisingly, the politics of patronage to racist Israel dominated Trump’s “historic moment”. After all, playing roughshod with Palestinian rights and lives has defined the Trump administration’s reprehensible disregard for civilised human values.

This conduct is consistent with his Israeli partners who have for seven decades and more resorted to gross human rights violations not excluding ethnic cleansing, mass murders, siege, occupation, detention without trial and apartheid.

Notwithstanding the mockery of humane values, Trump’s determination to endear himself to Zionist racism, has driven him to bulldoze what remains of his own tattered reputation.

The Trump bravado which accompanied his latest betrayal of Palestine, has not only brought shame to America, it has also exposed the hypocrisy of US allies in Europe and the Middle East. Their inability to challenge his repugnant abuse of power, is confirmation of their supportive role in allowing Israel’s persecution and oppression of Palestinians.

Ironically the timing of this so-called “deal” has not been lost. Minutes before the Trump circus started, reports confirmed that Netanyahu has been formally indicted on charges of bribery and fraud and breach of trust in three separate corruption cases.

Concurrently, Trump faces the axe as his impeachment trial gathers momentum. Whether the case against him is flimsy or not, the fact is that his reputation is severely damaged and deeply compromised.

Two thugs in warm embrace of each other in a shameful display of how to destroy an international order which was painstakingly put together following the 2nd World War. Unilateral bulldozing of global institutions has been starkly displayed at the press conference, cheered on by sycophants which included ambassadors from leading Arab sell-outs: Bahrain, Oman and the Emirates.

As South Africans having erased discredited Bantustans from its map post-1994, we can smell the entrenchment of Bantustans miles away. Trump’s deal is thus no less than a crazy move to legitimize the Occupied Palestinian Territories officially as Apartheid-era Bantustans.

Gaza, a much constricted West Bank without Jerusalem and minus the Jordan Valley is the so-called “promised land” for Palestinians.

That the “deal” is a scam designed to undermine Palestine’s just freedom struggle is clear. Evidence of it is not only buried in obscure details, but also in the smug face of baby-killer Netanyahu.

While the Trump initiative is being hailed by racist white supremacists who are the flip side of Zionists and disappointedly yet again funded by unelected Arab despots, Palestinian leaders have rightly condemned it outright. One can be sure too that the Arab street will denounce it.

Almost immediately following Trump’s announcement, Palestinian Authority chief Mahmoud Abbas rejected it. And contrary to Trump’s expectations, Abbas declared that he’ll be traveling to Gaza to meet with Hamas and Islamic Jihad to  close ranks in opposition to the deal.

This move by Abbas, even if it’s a symbolic gesture by Fatah, is an indication that neither disarming the Resistance nor demilitarizing Gaza is an option for him. On the contrary, renewed solidarity among Palestinian factions point to the first substantial sign of rejection in toto of what Netanyahu has described as a “good plan for Israel”.

The illegal annexation of Palestinian land particularly in the Occupied West Bank where Israel has in violation of UN Resolutions built racial enclaves known as “Settlements” has emerged as the single most important gift by Trump in this “deal of the century”.

Thus in this expanded Israel, Zionist dreams of an exclusive Jewish regime is pitted against the reality of a stateless, dispossessed and disenfranchised indigenous Palestinian population.

Trump’s incredible folly in pursuing a doomed deal which many analysts have described as dead on arrival (DOA), deserves rebuke from all quarters unafraid to speak truth to power.

Colonialism must be confronted, not celebrated as seen at the White House. And the same applies to Apartheid.