ARE OUR LEADERS MEN OR MICE? 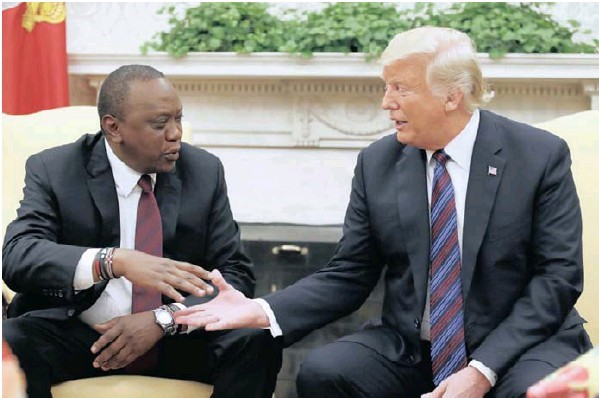 An article appeared on 21/09/2020 in the “East African” titled “US tells Kenya to Publicly Support Israel or Forget Free Trade Deal”.

The current US president has grown so arrogant to the point of dictating to other leaders who they should befriend, especially Arab and African leaders. Riding on his recent successes in the Gulf, Trump has reached a point of actually using blackmail to coerce world leaders as if they were his wives. In an effort to boost his chances of winning a second term in the coming elections, Trump has resorted to bullying other leaders as if they were small children. For the leader of the number 1 nation to lecturer a sovereign nation to exempt taxing his country on things like e-books, and music, really boggles the mind. The guy goes as far as categorically telling the Kenyan President to exempt firms from USA operating in Kenya from storing data in the country which is totally disgusting to say the least. I mean who does that?

Donald Trump should know that Kenya is an independent and sovereign state that will make its own laws and has the choice of choosing its own friends as it deems fit. No one should dictate to it, no matter how powerful they can be. Relenting to this kind of bullying is tantamount to surrendering a country’s sovereignty to a foreign power. The people of Kenya should dismiss this kind of bullying with the contempt it deserves.

The leaders of a sovereign Kenya should not fall for this scheme being perpetrated by Trump as it is demeaning to their pride as leaders and as a nation. He should be told in no uncertain terms will Kenya be dictated to by anyone on who to befriend or not. The people of Kenya will choose who their friends shall be.

The leadership of Kenya should certainly be wary of this kind of move by the US President. It could be designed in such a way as exposing them to appear to their people as mice and not leaders worth their salt. In our African culture, it is a taboo for a man of the house to allow another man to come into his house and tell him how to run his affairs. By prescribing to President Kenyatta, Trump is actually demeaning him indirectly which is unacceptable.

President Kenyatta should not fall for this nonsense and threatening approach. He should instead, refuse to negotiate the Free Trade Agreement (FTA) on these terms. Business is business. It should not have any strings attached to it. Besides, the USA will not sign any agreement with anyone unless it favors them. That is the bottom line. Let it be that, if the people of Kenya choose to restore diplomatic or business relations with Israel, let them choose the terms and conditions when doing so.

According to the article, the USA goes on to prescribe to Kenya what it should do like the “elimination of politically motivated, not tariff barriers on “Israeli goods, services or other commerce” imposed on Israel. It goes on to lecture Kenya that it “should eliminate what it calls “state sponsored, unsanctioned foreign boycotts of Israel, or compliance with the Arab League Boycott of Israel. Why include a third party in bilateral negotiations between two sovereign states?

Does Trump consider the independence and sovereignty of African countries as being of lesser stature than that of Western European countries? His arrogant approach certainly suggests that that is the case.

We call upon the African Union to stand with Kenya and stop such kind of deals happening to any of its members. This could be far from reality, given the kind of leadership currently at the helm of the AU. Unfortunately, it will be very difficult to find an African leader who is willing to speak truth to power. I wonder how such people find themselves in such high positions at the continental body. To say the least, I have never been impressed by the kind of leaders who came from the francophone countries. They seem to be willing tools of imperialism and neocolonialism. A good example is, immediately they took over the leadership of the AU, France forced them to lift Morocco’s suspension from the mother body before it had even complied with withdrawing from Western Sahara. Today Morocco with money given to it by the imperial west is busy playing the benefactor of black African countries without any shame.

My advice to other African countries is that they should be wary of such kind of machinations by the imperial west. They will never treat us as equals no matter what until we find a formula that cleans us of our dark skins and replace it with the white one. To our leadership on the continent, refrain from being used to run errands for the slave masters by rounding up your own just to be given sugar and a mirror like it happened in the past. Consult your people before signing these deals and do not impose on them bad deals. Remember, the imperialist will use the same system that they have been using from time and again. Today its Kenya, tomorrow it’s another country. Aluta continua!