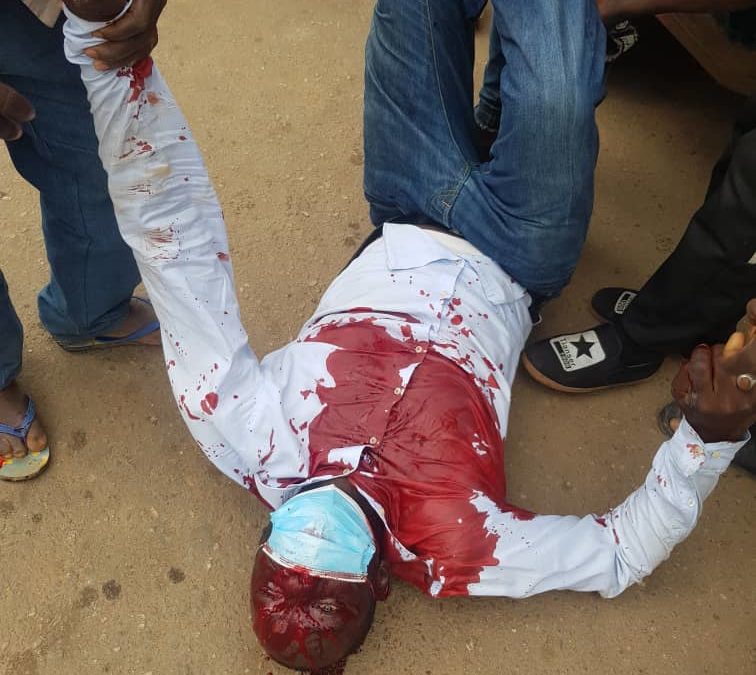 Every year, during the month of Muharram, the followers of the Ahlul Bayt Madhhab commemorate the death of Iman Hussein bin Ali, the grandson of the Prophet Muhammad peace be upon him. He was murdered by some elements of Muslims who were opposed to the leadership of anyone from the household of the Prophet Muhammad (PBUH). These marches have always been peaceful. However, the security establishment in Nigeria have always found excuses to attack these processions with live ammunitions resulting in numerous fatalities.

This year’s events have not been devoid of bloodshed either. Whilst such gatherings by other groups do not face such ire in Nigeria, those organized by the Islamic Movement of Nigeria are  always confronted by the heavy handedness of the authorities. Recently, during a procession in Zaria, two people were arrested for simply marching with the other mourners in these commemorations. Those arrested have been identified as Ibraheem Habib and Suleiman Taninu. The Islamic Human Rights Council has since demanded that the Nigerian government release the two and ensure that the rest of the processions and events be allowed to proceed without harassment.

Recently, in a procession that was taking place in the city of Kaduna, one reporter and one mourner were killed by police and others injured as police opened fire on the Ashura(10th Muharram) procession. The death of Brother Bashir, a reporter for the Kaduna Press is shocking but not surprising. Another teenage mourner, Mohammed Baqer was also reportedly killed for no apparent reason except joining the procession of this rather symbolic gesture. One cannot understand why the Nigerian government gets so intimidated with these Ashura commemoration parades. President Buhari is comfortable with all other religious processions by Christians, Vodoo and even Gay processions but will not tolerate Ashura, why?

According to the Chair of IHRC in Nigeria Massoud Shadjareh “This Nigerian administration (current Buhari Regime), has used multiple narratives to try and justify its persecution of the Islamic Movement. All accusations levelled at the Islamic Movement of Nigeria (IMON) have been proven time and again to be fallacious. The extreme violence and persecution that has characterized the Buhari clique’s attack is plain for all to see. It is time for all relevant international organizations and unions to take appropriate action against the Buhari regime”.

The persecution of Ayatollah Zakzaky, his family and thousands of his followers has been going on for a long time. It is time the Nigerian government ends its brutality against Zakzaky and his followers.  Ayatollah Zakzaky has been acquitted of all charges laid against him.  The government plans to appeal this judgement. What kind of justice is that? Here is a man who had 6 of his children martyred in front of him by the government of Nigeria who acted with impunity.

The main culprit in this case appears to be Nasir Ahmad el-Rafai, a Nigerian politician. He happens to be the Governor of Kaduna State since 2015. He was previously the Minister of Federal Capital Territory from 2003-2007 and the director of the Bureau of Public Enterprises. Mr. Rafai seems to be in the pocket of the Saudis and dislikes the followers of the Ahlul Bayt Madhhab with a passion. He is one of those politicians who is not capable of thinking for  themselves. He has bought into the Saudi narrative that the followers of this Madhhab are kafir [unbelievers], when the rest of us know that the feud between Iran and Saudi Arabia is driven by geopolitics and envy. [Khiyana].

I call upon President Ramaphosa of South Africa in his capacity as the Chair of the African Union to censure his Nigerian counterpart to respect freedom of religion as a human right. Bukhari should stop spilling the blood of innocent people simply because of differences in religious interpretation. He should distance himself from the sectarian divide between Iran and Saudi Arabia just to get a dollar from Crown Prince Muhammad Bin Salman (MBS). He should know better as a leader that his number one allegiance is to Nigeria and Nigerians before anything else.

Stop spilling the blood of innocent Nigerians before it rises against you!