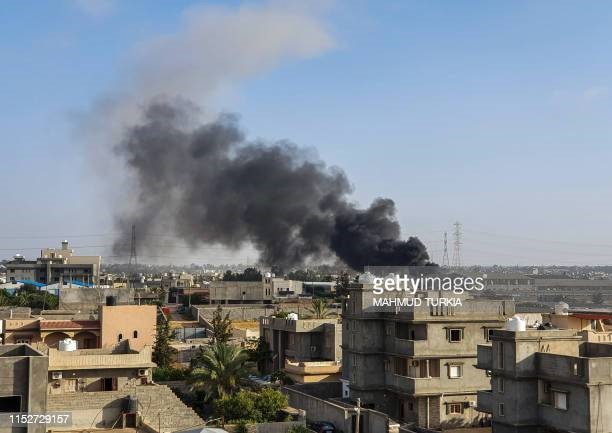 The call by Libya’s interim Prime Minister-designate Mr. Abdul Hamid Dbeibah, for the departure of 20,000 foreign fighters present in the country is a welcome development. He made the case to his proposed Cabinet line-up during parliamentary talks.

“The mercenaries are a stab in our back – they must leave,” interim premier Dbeibah told Parliament on Tuesday, adding that he would coordinate with the United Nations and the fighters’ countries of origin to arrange for their withdrawal.

The issue of mercenaries has been a huge albatross on the Libyan conflict and a stumbling block to peace for the troubled country.

Libya, a major oil producer, has been mired in conflict since the 2011 NATO-backed uprising against long time ruler Muammar Gaddafi. The chaotic war has drawn in several outside powers and a flood of foreign arms and mercenaries.

Dbeibah’s comments came during the second day of a parliamentary debate on his proposal for a new interim government, where he denounced a “fierce campaign” carried out by “those who want to destroy our country, who want to occupy it”.

During the NATO-led war, there is enough evidence to suggest that rebel units in Tripoli were secretly armed so they could rise up and help take the capital, while British agents infiltrated the city to deploy radio equipment to help target NATO air strikes in a way that would avoid civilian casualties.

France sent dozens of military advisers to organize and train the rebels. France also delivered arms to the rebels that had been supplied by Qatar.

Reuters correspondents in the field report having seen apparent evidence of foreign special forces on the ground, although their activities were never made clear. Rebels, whose accounts could not be confirmed, also spoke of assistance from CIA agents.

It was now time for foreign special forces to start leaving Libya as quickly as possible as they risked getting caught up in internecine quarrels within the forces loyal to Libya’s new transitional government.

With details emerging of what special forces had done earlier in the conflict — assistance with weapons and tactics, acting as forward air controllers for NATO bombers and providing weapons to rebel forces in the Western Mountains.

In the wake of the “Arab Spring” uprisings in Tunisia and Egypt in late 2010 and early 2011, the conventional narrative, at least in the Western media, soon became an unstoppable tidal wave, of emancipation. This was expected to leave no stone unturned, at least in the decaying Arab republics, which many academics continued to argue were structurally weaker than the region’s monarchies.

In this context, the Benghazi uprising in eastern Libya in February 2011 was widely portrayed as the start of yet another uprising — both nationwide and organic — that would soon see Muammar Qaddafi’s regime swept from power by an overwhelming majority of the population. As the weeks dragged on, however, with Qaddafi still effectively in power and the bulk of the Libyan armed forces apparently remaining loyal, this narrative had to be abandoned and replaced by a new one depicting a desperate regime clinging to power by wielding extreme violence against its people and deploying vicious foreign mercenaries.

Certainly, by March 2011 it was generally assumed that Qaddafi’s fighters, whoever they were, would massacre thousands of civilians if they managed to re‐enter Benghazi, and if the Western powers and their regional allies did not step up to the plate with some sort of humanitarian intervention on behalf of the “Libyan revolution.”

Although several analysts did question the details underpinning these two interlinked narratives, it took more than five years before any real willingness emerged in Western government circles to thoroughly investigate the events of 2011.

Published in September 2016, for example, a British parliamentary report recognized that the eventual NATO‐led intervention (Operation Unified Protector) had gone badly wrong and conceded that the intelligence it was based on was not necessarily credible in the first place.

Entitled “Libya: Examination of Intervention and Collapse and the UK’s Future Policy Options,” it drew the conclusion that former British Prime Minister David Cameron was primarily to blame for the ensuing chaos in the wake of Qaddafi’s removal, due to “his decision‐making in the [UK] National Security Council” and his “failure to develop a coherent Libya strategy.”

But beyond this superficial and heavily politicized reading of the Libya conflict, which offered little insight into its root causes or the real objectives of Britain and the other intervening external powers, a substantial body of evidence has now emerged that allows for a much deeper understanding of the Libyan uprising and the NATO intervention.

In particular, the contents of hundreds of recently declassified files, court‐subpoenaed materials and leaked official correspondence strongly suggest that the two mainstream narratives of 2011, and even the British parliament’s belated findings, have largely obscured the real reasons behind Qaddafi’s removal and the methods used to make it happen.

Western countries and their Arab Gulf friends were the first ones to deploy mercenaries including ISIS to Libya. However, their capability will not allow them to call for the eviction of the mercenaries from Libya simply because they are the same thing.

While calling for the withdrawal of the mercenaries in Libya, perhaps it would be appropriate to also indict some of the well-known perpetrators like David Cameron, Hillary Clinton, Barack Obama, and Nicholas Sarkozy for war crimes by the ICC.