In March 2016, I addressed the 31st Session of the United Nations Human Rights Council in Geneva concerning the dire condition of adult Palestinians including women and child prisoners. The UNHRC Resolution emanating on the Human Rights Situation in the Occupied Palestinian Territory, including East Jerusalem.

“the Council demands that Israel, the Occupying Power, comply fully with the provisions of the Fourth Geneva Convention of 1949 and cease immediately all measures and actions taken in violation and in breach of the Convention; calls for urgent measures to ensure the safety and protection of the Palestinian civilian population in the Occupied Palestinian Territory, including East Jerusalem; and demands that Israel, the Occupying Power, cease all practices and actions that violate the human rights of the Palestinian people. The Council also calls for urgent attention to the plight and the rights, in accordance with international law, of Palestinian prisoners and detainees in Israeli jails; demands that Israel, the Occupying Power, cease all of its settlement activities, the construction of the wall and any other measures aimed at altering the character, status and demographic composition of the Occupied Palestinian Territory; and requests the Secretary-General to place the presence of the Office of the High Commissioner in the Occupied Palestinian Territory on a firmer basis under the regular budget”.

Israel continues to be a habitual violator of international law.  As an occupying power Israel fails dismally under the Geneva Conventions and anti torture convention, whereby Palestinian civilians and prisoners continue to endure daily crimes perpetrated by the Israeli Occupying Forces (IOF) and settler colonialism.

Impactful intervention is required by the international community in bolstering the “international intifada”. At #IAW 2021, the IPPSRA Citizens Bill authored by the writer and supported within the broader Palestinian solidarity movement was unveiled.

In the words of Honourable Member of Parliament Mandla Mandela, “It is true lawfare has long been a weapon in the arsenal of liberation struggles all over the world. In our own quest for freedom in South Africa and the heyday of the 1960’s 1970’s, 1980’s and 1990’s Anti – Apartheid Movement in the UK, lawfare was a highly effective tool of struggle. Though the Boycott Divestment and Sanctions campaign at the time started out as feeble protest led by shop attendants, it was the sincerity of voices and the determination of their actions that triggered the avalanche. It is in such context within which our PRO-BDS Bill must land rather than a whimper of irrelevant and sporadic protests”.

“We require mobilisation on an unprecedented scale in support of the PRO BDS Bill. I am in full support of the draft Bill. This is a historic moment in  our struggle for a free Palestine.  We must ensure that the widest spectrum of public engagement is mobilised and that we create global awareness of the campaign. For too long now has Apartheid Israel continued its atrocities, ignored international law and made a mockery of the International Criminal Court. All of this in broad daylight and within full view of the international community”.

IPPSRA aims to hold Israel to account for its egregious crimes through institutionalised campaign for legislating boycotts, divestments and sanctions.

The proposed legislation would mark South Africa’s cessation of diplomatic and trade relations with apartheid Israel. Also holding Israeli IOF commanders and military serviceman accountable for crimes perpetrated with impunity. Investigation and penal enforcement measures for South African male serviceman being recruited in the IOF and removal of protection of diplomatic immunity and privileges of Israeli state leaders.

Included must be the category of Israeli Prison Service agents notorious for inflicting interrogation methods of torture and humiliation.

There are voluminous records of administrative arrest of Palestinian boys as young as the age of two years.

The wars of aggression in the Gaza Strip, the IOF remains criminally responsible causing catastrophic destruction in 2008-2009 (Cast Lead) and 2014 (Protective Edge), whilst the Gaza Strip since June 2007 remains under siege and naval blockade.

IOF war crimes in 2010, aboard the Freedom Flotilla Vessel, Mavi Marmara and atrocities perpetrated by IOF snipers in the right of return marches along the Gaza border are well documented.

Israel had clear intention beyond the perimeters of the laws of war and humanitarian law in achieving military objective without any caution to distinction and proportionality, whereby the IOF caused wanton destruction and aggression on Gaza’s civilian population.

THE CENTER FOR CONSTITUTIONAL RIGHTS

Genocide is defined, not by a particular form of violence, but by general and pervasive violence. Settler colonial regimes are structurally prone to genocide and may indulge in “genocidal moments” when they become frustrated by the resistance of a colonized or occupied people.

In its concluding remarks, prominent human rights advocates and scholars argued the killings of Palestinians and their forceful expulsion from mandate palestine in 1948, the Israeli occupation of the West Bank, East Jerusalem, and Gaza the violence and discrimination directed at Palestinians by the Israeli government have violated a number of human rights protections contained in international human rights, with genocide being among them.

[3] Centre for Constitutional Rights – The Genocide of the Palestinian People: An International Law and Human Rights Perspective, 25 August 2016

The Zionist occupying forces continue to conduct arbitrary arrest, administrative detention in the period 2020 / 2021. 170 children were held in Israeli prisons in three central prisons (Megiddo, Ofer and Damon), in addition to several detention and interrogation centres. Children are subjected to the harshest conditions of enduring torture and psychological abuse.

Mohammed Munir Moqbel, 16, from Al-Oroub refugee camp in Hebron, was brutally assaulted with the butt of a rifle at the time of his arrest, resulting in fractures to the jaw and face and general bruises on his body.

Israeli prison administration continues to deliberately deprive children of the necessities of life, and commit arbitrary intrusive practices against them, most notably searches of their rooms and sections, while authorities deprive dozens of children from visiting their parents or to legal representation and adult prisoners supervision. 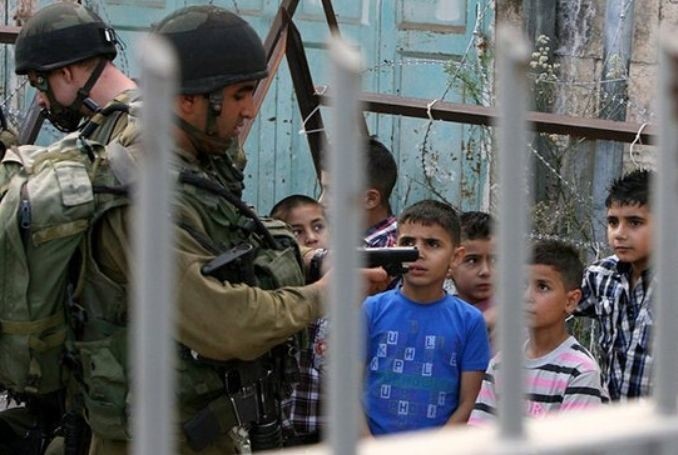 Article (79.2) of the First Additional Protocol of the Geneva Conventions 1977 states that cases of detained mothers should be considered as a priority.

Israel disregards – Article 25.2 of the Universal Declaration of Human Rights 1948, which affirms the protection of motherhood and childhood. This entails right to special care, assistance and special protection for women is contained in Security Council Resolution (1325) of 2000 on the organization of the treatment of women and girls during interrogation and detention. It calls on all parties in armed conflicts to take special measures to protect girls from gender-based violence and their special needs.

The report monitored (72) cases including (26) arrests. This includes Sindas Aweys during her coverage of events at al-Aqsa Mosque and released after investigation on the condition that she be removed from al-Aqsa Mosque for 3 months.

UN – WHO POSITION ON COVID 19 AND PRISONERS

The protection of prisoners rights must be of the highest attainable standard of physical and mental health which is a fundamental human right of every human being without discrimination.

The United Nations (1990) Basic Principles for the Treatment of Prisoners set out that, “prisoners shall have access to the health services available in the country without discrimination on the grounds of their legal situation”.

In this context, increased efforts are required to ensure a health promoting prison, which is described as having the following elements:

The WHO joint statement in mitigating the Coronavirus pandemic also urges, ‘political leaders to consider limiting the deprivation of liberty, including pre-trial detention, to a measure of last resort, particularly in the case of overcrowding and to enhance efforts to resort to non-custodial measures.

Despite demands and appeals by many international institutions, including the United Nations, that administrative detention prisoners should be released because they are political prisoners and to curb the spread of the coronavirus pandemic, demands went unheeded and during 2020 administrative orders continued to be issued against prisoners, with utter disregard of the international community.

The Israeli authorities continue to abuse Article 78 of the Geneva Convention on the Protection of Civilians in Wartime (1949) – The Fourth Convention.

Their actions are contrary to international law, in terms of arrest without charge, which contradicts the text of article (9.2) of the International Covenant on Civil and Political Rights: “Any person arrested must be informed of the reasons for such arrest when it occurs, and must be informed  promptly of any charge against him”, and therefore it is an arbitrary arrest according to the text of article (9.1) of the Covenant that “Everyone has the right to liberty and security of person. No one shall be subjected to arbitrary arrest or detention. No one shall be deprived of his liberty except on such grounds and in accordance with such procedure as are established by law”.

Secondly, administrative detention is contrary to the principle of public trial, it is based on a secret file and confidential evidence, where article (14.1) of the International Covenant on Civil and Political Rights guarantees the right to a fair public trial.

Thirdly, administrative detention is contrary to the principles of justice, impartiality since the military judge and the prosecutor serve in the Israeli army, and they work in the same legal unit.

Apartheid Israel’s IOF, security and prison personnel continue to violate Palestinian prisoners’ rights despite the coronavirus pandemic and entrench systematic discriminatory practices and laws to subjugate the will and aspiration of the Palestinian people for rights to self-determination.

Palestinian children and political prisoners under military administrative detention must be immediately released and be protected under the Geneva conventions.

Under WHO coronavirus guidelines and international humanitarian law detainees must be afforded proper medical and healthcare treatment.

The Coronavirus exacerbates the present dire situation of prisoners.

The utilisation of lawfare and advocacy of the IPPSRA Bill shall go a long way in ensuring countries exercise complementarity universal jurisdiction amid international institutions intransigence, whilst the ICC’s decision to exercise criminal jurisdiction for IOF crimes perpetrated in the Gaza Strip in 2014 remains encouraging. 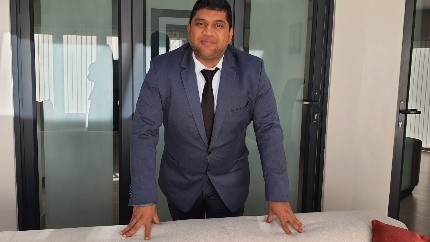 South African International Human Rights & Trade Lawyer. Lawfare advocate for a free Palestine – An attorney who, under section 4(2) of the Right of Appearance in Courts Act 62 of 1995, has the right of appearance in the Supreme (High) Court in the Republic of South Africa