A Day Against Arrogance 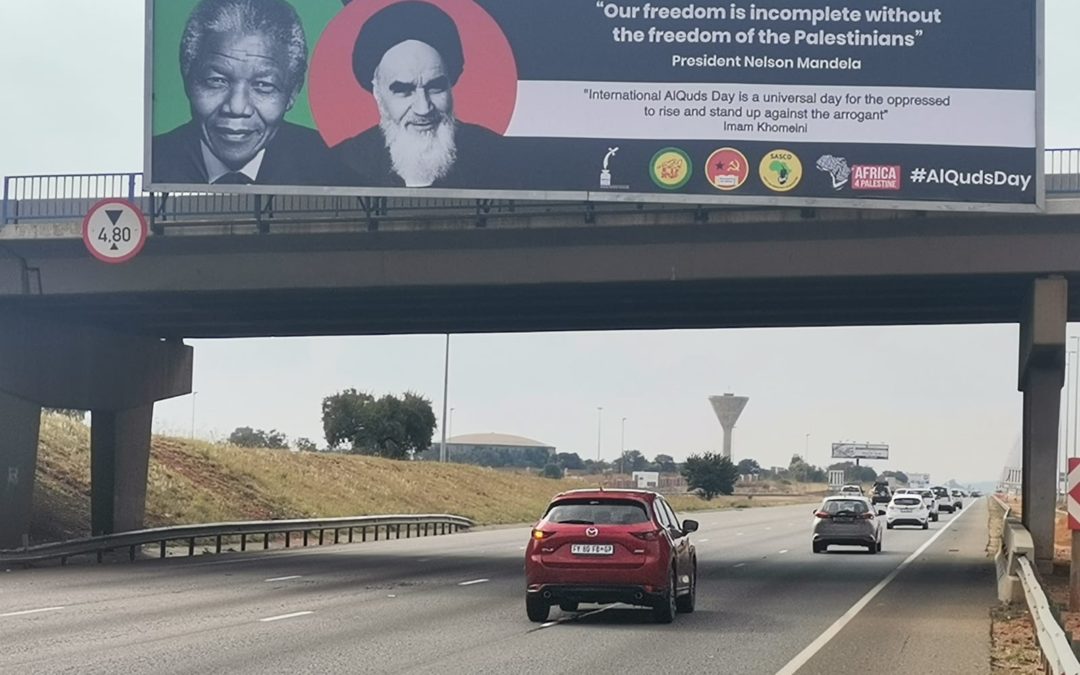 The former leader of Iran, Ayatollah Khomeini, has referred to the annual #AlQudsDay as “a universal day, a day for the oppressed to rise and stand up against the arrogant.”

#AlQudsDay was launched in 1979 in Iran as a day to stand in solidarity with the Palestinians against Israeli oppression. However, the day, as explained by Imam Khomeini, is also an occasion to reflect, mobilise and organize against tyranny and oppression, the world over.

It is in this spirit of internationalism and anti-oppression that peoples across South Africa and around the world held events and activities on Friday 07 May in support of the Palestinian people and against Israeli Apartheid. In fact, international Al-Quds Day, this year, took place in over 100 cities worldwide.

The International #AlQudsDay campaign has become one of the most prominent Palestinian solidarity days across the globe. This year marks the 42nd year of this annual solidarity event. The events sees people from all walks of life come out in active solidarity with the people of Palestine. There time is more urgent than ever before for us to show our solidarity, because as we speak, now in Palestine, more and more land is be stolen and houses demolished in a fashion that reminds us of our own dark days of Apartheid here in South Africa. However, and importantly, while Israel defiantly continues grabbing land and destroying lives, the world is increasingly standing up to Israel.

However, beyond comparisons, there is now a legal case that the Israeli regime is also in violation of the crime of Apartheid as defined by international law. It seems that international institutions are now catching up with reality. And for this we should thanks the activists and campaigners as well as community members who have consistently stood side by side with the oppressed masses of Palestine in exposing Israel’s apartheid regime.

In South Africa we have the added advantage that the voice of the people and the sentiments on our streets have translated into not only political action but also state intervention. The South African government, following the ANC’s 2017 Nasrec Conference, downgraded SA’s relations with Israel, including scaling down our mission in Tel Aviv from an Embassy to a mere administrative Liaison Office. We currently do not have an ambassador in Israel – our government is sending a clear message to Israel that its practices of discrimination and oppression are not welcomed and will not be tolerated let alone rewarded!

South Africa and her people are truly a great ally of Palestine but we ought to increase our efforts. We do not have the luxury of waiting. Palestinians are being killed on a regular basis. This past week Israeli forces killed a 16-year-old Palestinian teenager, Said Yousef Mohammad Odeh, at around 9 pm on Wednesday night, in Odala, a village south of Nablus, in the occupied Palestinian West Bank.

We mobilize out of outrage against Israel’s illegal actions. We organize out of a debt we owe to the international community including the Palestinians, Iranians, Cubans, Zambians and others who once stood with us. We arrange international solidarity events and activities because we believe in a better and more peaceful world. We are building a better South Africa, and contributing towards a better and more loving world.