Plea by Jewish Anthropologist: Stop Eviction of Palestinians in Jerusalem! 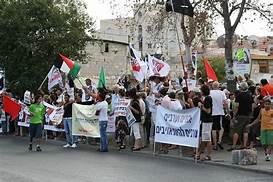 Palestinians facing eviction in Occupied East Jerusalem may have helped save my family, says Julia Elyachar, professor of anthropology at Princeton University.

In a moving appeal published in The Forward, she recounts the kindness shown to her great-grandfather Raphael, whom she describes as an Arab Jew, by a Muslim family in Jerusalem.

Raphael who was born in Jerusalem, died when Elyachar’s grandfather was 13. She recollects that her great-grandfather had two business partners.  “One partner, who was a European Jew, took advantage of the bereft widow, and stole our family’s livelihood. The other partner, an Arab and fellow Jerusalemite, saved my family from ruin, helped however he could, and treated my grandfather like a son.”

Elyachar recalls that the kind partner came from an illustrious Muslim family in Jerusalem, the Dajanis, also known by the honorific Daoudi, given to them by Ottoman Sultan Suleiman the Magnificent in 1529.

In her appeal to Jewish leaders in America as well as the Biden administration, she points out that families with those two names — Dajani and Daoudi — are facing eviction from their homes in Sheikh Jarrah, a neighborhood in east Jerusalem.

“I don’t know if either family is descended from my great-grandfather’s partner and my family’s benefactor. But the contrast between their imminent fate and the kindness shown to my great-grandfather is devastating. As a Jew in whose name an increasingly extremist Israeli government purports to speak, it’s my duty — and the duty of us all — to voice our objections to this step. It’s an unconscionable violation of the common humanity that binds us all.”

Although the Dajani and Daoudi families have until August to leave, court orders against seven other families, including the Al-Kurd family, which has been fighting eviction since settlers moved at gunpoint into part of their home in 2009, must vacate their homes by May 2.

At the time of writing, 130 Palestinians belonging to those seven families will be evicted from their homes.

As she correctly emphasises, eviction is always a tragedy. As South Africans know only too well, forced evictions, confiscation of homes and properties, left a legacy of ruin and displacement. The sadness that overcame generations of communities in Fietas, SophiaTown, District 6 – to cite a few – was replaced with bitterness and resentment against the architects of apartheid’s notorious “group areas”.

Unjust atrocities perpetrated by the apartheid regime under the cover of so-called “laws”, failed to conceal the implementation of white supremacy from the ground up.

Likewise as Elyachar points out, Israeli eviction practices rely on a slew of obsolete laws dating back to the British Mandate. Others are more recent.

“The Absentees’ Property Law of 1950 gave the property of Palestinians who were evicted or fled in 1948 to the State of Israel; the Legal and Administrative Matters Law of 1970 ruled that only Israeli Jews could reclaim land or property in Palestinian areas; and the Jerusalem Master Plan draws on tools of urban planning to evict non-Jews from East Jerusalem.”

In her poignant recollection of the past, in which she grew up listening to stories from her grandfather about his life in pre-1948 Jerusalem, she remembers her grandfather had many friendships and associations with Muslim and Christian Jerusalemites.

Her great-uncle, Eli Eliashar, titled one of his books “Living with the Palestinians” and spoke out against the occupation of the West Bank, Gaza and Jerusalem after the 1967 War. He called for negotiations with the PLO and establishment of a Palestinian state to avert disaster for all.

“All this history was part of my Jewish education.”

Her plea thus is that evictions that aim to rid Jerusalem of its Palestinian non-Jewish residents must end. Its a shameful policy that has to stop.

Her message is loud and clear: The current path of eviction at the point of a gun leads to a dismal future for all, not just for the families of Sheikh Jarrah.

Whether her call on Jewish leaders in America to intervene in halting the forced evictions will be heard and acted upon is not clear. However her voice and more pertinently the memories she shares grounded in humane values, ought to prick the conscience of Jewish communities across the world.

If indeed her plea reaches South Africa, it will be important to gauge the reaction, if any, by groups such as the SA Jewish Board of Deputies and the SA Zionist Federation. Will they be dismissive of her or be alive to the crime of racist ethnic cleansing of Palestinians in Israel?

By the same token one has to wonder why the ANC-led government has to date remained shockingly silent?