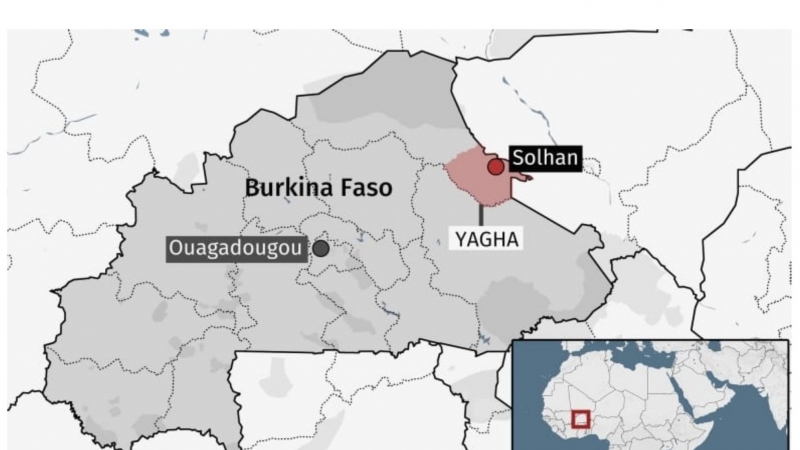 Gunmen have killed at least 132 people in Burkina Faso’s volatile north, the government said, as the United Nations chief condemned “the heinous attack” and called on countries to step up the fight against “violent extremism”.

The assailants struck during the night on Friday, killing residents of the village of Solhan in Yagha province, which borders Niger. They also burned homes and the village market, according to a government statement on Saturday. The victims included seven children.

According to a government spokesperson Ousseni Tamboura, another 40 residents were also wounded. President Roch Marc Christian Kabore called the killings “barbaric” and said the Burkinabe people “must remain united and solid against these obscurantist forces”. No group has claimed responsibility so far.

The overnight assault was the deadliest recorded in years in Burkina Faso.

Since 2015, the West African country has struggled to fight back against increasingly frequent and deadly attacks from groups who say they have links to the so-called “al-Qaeda and more recently to “ISIL (ISIS)”. These groups are in fact sponsored criminal gangsters who are after stealing and smuggling of the country’s mineral resources.

The attacks first started in the north near the Mali border, but have since spread to other regions, particularly in the east, causing one of the world’s most acute humanitarian crises.

Over 1 million people in Burkina Faso have been forced to flee their homes because of the long-running conflict, as armed groups step up attacks on the army and civilians despite the presence of thousands of French troops and other international and regional forces across the Sahel.

The presence of these multinational forces needs to be probed by the African Union (AU) in countries such as Burkina Faso, the DRC, and now Mozambique, because the people of Africa are now beginning to smell the coffee that there is something fishy behind these disturbances. It could be the new scheme on the block to loot, pillage, and plunder Africa’s natural resources.

UN Secretary-General Antonio Guterres said he was “outraged” by the killings in Burkina Faso and offered the country the world body’s “full support”.

Mr. Guterres strongly condemned the heinous attack and underscored the urgent need for the international community to redouble support to Member States in the fight against violent extremism and its unacceptable human toll.

Burkina Faso has now declared 72 hours of mourning in the country.

In Solhan, the assailants struck at approximately 2am against a position of the Volunteers for the Defence of the Motherland (VDP), a civilian defence force that backs the national army.

They then attacked homes and carried out “executions”.

The VDP was set up in December 2019 to help Burkina Faso’s poorly equipped military fight against armed groups, but it has continued to suffer more than 200 fatalities. These volunteers are only given two weeks of military training before deploying to work alongside the security forces. They typically carry out surveillance, information-gathering, or escort duties.

According to Corrine Dufka, the Human Rights Watch’s West Africa director, the Solhan attack followed a familiar pattern seen elsewhere in the Sahel this year.

In neighbouring Niger, armed attackers killed 137 people in March in what analysts and rights groups said could have been revenge for killings by self-defence groups in the area or for the arrests of people suspected of belonging to armed groups.

Friday’s attack pushes the number of people killed by armed groups in the Sahel region since January to more than 500. Most of these killings were supposedly carried out by fighters who claim to be aligned with the so-called “Islamic State of the Greater Sahara”.

The attack in Solhan came just weeks after defence minister Cheriff Sy and other military top brass visited the neighbouring town of Sebba to assure people that life had returned to normal, following a number of military operations in the area.

What makes it even more suspicious is the fact that there is also a military barracks not far away from where the attack took place. But they did not react. They never arrived on the scene. It’s a feeling that people across the Sahel now share in – that they cannot rely on their security forces to protect them.

This is probably being done deliberately in order to prepare the people to accept Africom at the appropriate time.

With the security situation deteriorating, analysts have said more violent attacks were likely to follow in Burkina Faso and neighbouring countries. The whole of Africa is in danger now and its time we work up or else our mineral resources will be gone if we are not careful.

This is an awful massacre that’s happened. The time has come for the AU to really probe this phenomenon now. This kind of behaviour has got nothing to do with the so-called ISIS or al-Qaeda wanting to set up the so-called Khilafat (Caliphate) anywhere, and we are going to have to expect more similar types of reports even in countries where there are no Muslim populations.