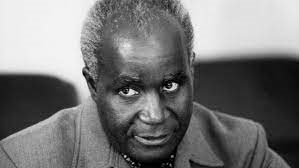 Dr. Kenneth Kaunda belongs to the first crop of nationalists who were so committed to the total liberation of the African continent as a whole even at the expense of their own comfort. Their prime concern was to make sure that the African people are released from the york of bondage under colonialism to become masters of their destiny.

The other nationalists that come to mind are the likes of Mwalimu Julius Kambarage Nyerere of Tanzania, Samora Moises Machel of Mozambique, Kwame Nkhrumah of Ghana, and Thomas Sankara of Burkina Faso. There are others who would fit into this group, who started very well but got distracted later by virtue of having married younger wives late in their lives.

However, the above-mentioned leaders stand out as diamonds above all. These are those who went into office and never took the peoples wealth for their personal use. They never stole from their country’s wealth.

The late Dr. Kenneth Kaunda is one of those who is rated remarkably high in this regard. He never stole from the people, even at a time when his country was doing exceedingly well when copper was fetching high prices on the world market.

He lived a very moderate life devoid of the so-called Gucci and Versace labels that have been created by the capitalist westerners specifically for Africans to indulge in. He wore the cheapest fabrics that were on the market at the time until his departure from this earth.

In his early days, Dr. Kaunda never wore suits with a necktie, one would see him strolling in his Safari suit which was a trademark amongst all nationalists those days. He would also wear a chitenge wrap signifying African pride. He remained humble in dressing until he breathed his last.

He lived his life as a vegetarian when he stopped eating meat during the colonial times after he saw Africans buying meat through a hole at the butchery while whites were the only ones allowed inside when buying meat.

He also never indulged in alcohol all his life, a sign of humility as alcohol makes one feel enormously proud when under its influence.

In the 1980s, the imperial western governments devised a plan to overthrow KK using the trade unions. They caused shortages of food in the country with the sole purpose of making the people rise up against Dr. Kaunda. This was a punishment against Dr. Kaunda for supporting the liberation of other countries in Southern Africa.

They raised a man from the trade unions by the name of Fredrick Chiluba who came up with all sorts of accusations against Dr. Kaunda including accusations of stealing the country’s wealth. Chiluba went about tarnishing the image of Kaunda until he took power.

What followed was that Kaunda and his party the United National Independence Party (UNIP) lost power and Kaunda conceded defeat and allowed a peaceful transition to multiparty democracy in the country.

What followed when KK conceded defeat, President Chiluba started a campaign of persecuting him. He was stripped of his Zambian nationality calling him a foreigner in a country of his birth and a country that he helped liberate. However, the campaign did not last long as Chiluba’s case soon crumbled before the courts of law and KK was vindicated.

A man of faith as he was, he did not hold grudge with his persecutor, he forgave him. In the end, it turned out that it was Chiluba himself who actually was stealing money from government and not Dr. Kaunda.

When you are an innocent man like the way Dr. Kaunda was, only the truth will set you free. Sometimes, your enemies come to your aid. When the late president Fredrick Chiluba was busy denouncing Dr Kaunda, unlikely support came from former USA president Jimmy Carter denying that President Kaunda stole money.

The Zambian people later discovered that Dr. Kaunda after leaving state house, did not have a decent house to live because he didn’t have money starched in offshore accounts. Where were the billions that Mr. Chiluba was telling the nation that KK had stolen? The Zambian government had to build him decent a house to live and restored his “Father of the Nation” status that had earlier on been removed by the corrupt Chiluba regime.

Dr. Kaunda is dead now, and he is gone to meet his God with a clean heart that he did not steal money from his people. Like his friends Samora Moises Machel, Thomas Sankara, and Mwalimu Julius Kambarage Nyerere, he has died a pauper president. The challenge to the remaining African presidents is, how many of you would like to leave behind such a legacy? Please join the “Pauper President Club” and forever be remembered by your people.