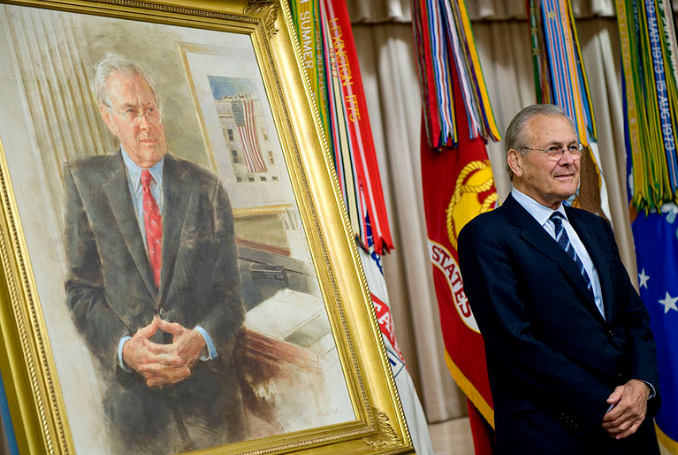 In a strange coincidence of fate, a key architect of America’s ill-fated “War on Terror” Donald Rumsfeld, died on the eve of the  departure by stealth of US troops from Afghanistan.

Two decades of lies and fabricated propaganda accompanied by gung-ho media coverage to justify the invasion and occupation of Afghanistan, are finally being unravelled.

Though Rumsfeld and his cohorts of war criminals who comprised of neocons and diehard Likudniks within the Bush administration may have strutted about like peacocks, their project was doomed from the beginning.

Having unleashed an unrelenting war via arsenals of mass destruction which resulted in the deaths of thousands of innocent people and compounded by the displacement of thousands more in addition to imposing regime change, the American mission – far from being accomplished, ended in disaster.

The discredited war on Afghanistan, in addition to being illegal was deceptively authorised by the United Nations. An ill-gotten “green light” to bomb Afghanistan to smithereens in pursuit of Osama Bin Laden, falsely accused of 9/11 was obtained through calculated deceit.

And the propaganda which emanated from the White House and Pentagon generated levels of anger, hysteria and vengeance which drove allies led by Britain and France to turn America’s “War on Terror” into a global frenzy.

So as Rumsfeld is interred, his misdirected ambitious project in collaboration with fellow war criminals from Bush to Blair, to subdue Muslims and Islam, lies in tatters. It is no exaggeration to suggest that the “War on Terror” and language associated to rationalise America’s hostile military aggression has been experienced by Muslim victims as a War on Islam.

Between 9/11 and to date, America has wreaked havoc across Muslim lands, from Afghanistan to Iraq and Syria, while steadfastly protecting, funding and arming Israel’s genocidal policies against Palestinians.

Now that America has been unmasked – yet again – as a serial perpetrator of war crimes, it has evacuated its troops from Afghanistan, deceptively under cover of darkness.

To conceal their inglorious fleeing, the manner in which American troops fled Bagram air base outside Kabul in the middle of the night saw them shutting off electricity at the base before slipping away.

Associated Press (AP) captured US cowardice as follows: “The US left Afghanistan’s Bagram Airfield after nearly 20 years by shutting off the electricity and slipping away in the night without notifying the base’s new Afghan commander, who discovered the Americans’ departure more than two hours after they left, Afghan military officials said.”

Rumsfeld’s dead body may not be witness to the futility of 20 years of savagery inflicted upon an entire nation, but his accomplices will certainly rue the day they hatched evil plots to expand America’s military industrial complex which today lies in ruins in Bagram.

Bush, Blair and NATO’s belligerent leaders would be looking aghast at US-trained Afghan soldiers surrendering en masse to the Taliban. Many more who expressed resentment against America for being betrayed fled to neighbouring countries seeking refuge.

The unreliability of Uncle Sam has been a bitter lesson for those who collaborated with the US army against their own. Costly experience for having reposed misplaced faith in the army of an imperial power.

What’s left to be seen is whether the government led by Ashraf Ghani, which was imposed by the US as its lackey, will accept that the departure of American troops marks the end of its reign?

It is noteworthy to be reminded by author Nathan Lean that the so-called “War on Terror”, launched by President George W Bush in the immediate wake of September 11, 2001, incited Islamophobia to a large degree and posited in the minds of the American political right and the general population alike the idea that Muslim-majority countries, not the least of which was Iraq, were suspicious and dangerous.

Afghanistan thus featured as the theatre to launch a “crusade” in America’s war on “Islamic fascists”. Crude language repeatedly used to frame the war as just and  necessary to eradicate “Islamist Terrorism”.

Now that the invaders have fled with their tails between their legs, it finally allows the Afghan people to rebuild their country and their broken lives without the presence of a foreign army causing mayhem and havoc.