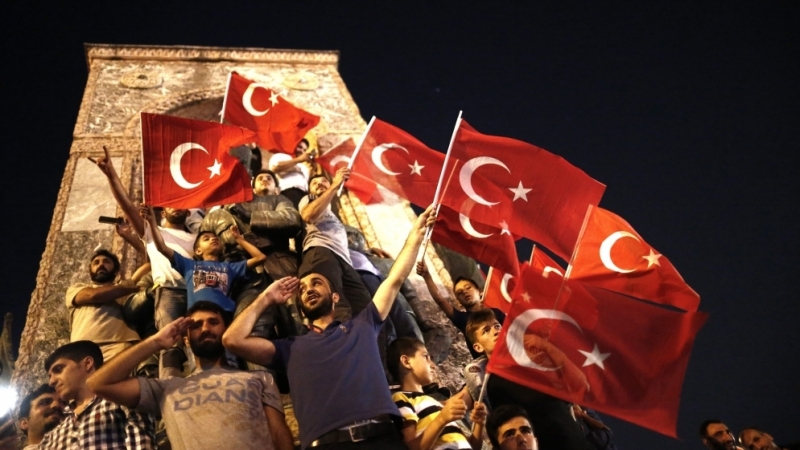 Turkey witnessed the bloodiest coup attempt in its political history on July 15, 2016, when a section of the Turkish military launched a coordinated operation in several major cities to topple the government and unseat President Recep Tayyip Erdogan.

Soldiers and tanks took to the streets and a number of explosions rang out in Ankara and Istanbul.

Turkish fighter jets dropped bombs on their own parliament, while the chairman of the Joint Chiefs of Staff, Hulusi Akar, was kidnapped by his own security detail. For several hours, it looked like Turkey was going to face the fourth devastating military coup in its 95-year political history.

As news of the coup attempt spread via social media, thousands of ordinary citizens, armed with nothing more than kitchen utensils, gathered in streets and squares around Anatolia to oppose the coup.

The crowds resisted tank fire and air bombardments, and, with the help of loyalist soldiers and police forces, they defeated the coup attempt in a matter of hours. The government swiftly declared victory and scores of troops that had taken part in the coup surrendered on the Bosphorus Bridge in Istanbul.

Yet the overall price of victory was high: 241 people were martyred, and 2,194 others were injured. The Turkish government blames the failed coup attempt on Fethullah Gulen, a Turkish preacher and businessman who has lived in self-imposed exile in the United States since 1999.

For us in Africa who are experiencing coups almost every other year, know too well the repercussions of coups. Coups only seek to derail a country’s development and the loss of lives is almost certain.

Examining the 15 July coup closely, one notices the duplicity of the western countries. For example, while the coup was going on, all former USA president Barack Obama had to say to when he was asked to comment was: “He was monitoring the situation”. He never condemned the plotters let alone call for the return to the civilian order.

Fast forward that and compare with the western countries reactions to what recently happened in Myanmar, one sees this false assertion that the west always stands for democracy and the rule of law. It appears like that it is selectively applied.

Instead of condemning the coup plotters, the west chose to keep quiet and instead tried to paint a picture as if there was a crackdown going on in Turkey perpetrated by the government against innocent security servicemen. Some even called it “a purge of the security services” directed against elements of the gulenists.

Immediately after the coup attempt, President Erdoğan and the AKP government initiated a comprehensive restoration process. The kind of leadership that was provided by Erdogan after the coup, can best be described as wise and admirable. Many people were afraid that President Erdogan was going to embark on spilling the blood of his opponents, but he did not. He left that to the courts.

Furthermore, the political developments that came after the coup, have paved the way for the entrenchment of Turkish democracy. It has also ensured a strong parliamentary system and a good elections character.

As for the perpetrators of the coup, Turkish law has taken its course. They have all been arraigned before the courts. Those found not guilty are released from detention and those found guilty, are punished according to Turkish law.

On the economic front, before President Erdogan came to power, Turkey was called the “Sick Man of Europe”. When he came to power things changed and he steered a phenomenally successful economy and today Turkey is an economic giant in its own right in the region and is on the verge of joining BRICS. Though Erdogan and Putin have had a love hate relationship, one wonders whether BRICS which to date has failed to attain any of its goals, will be boosted by Turkey’s participation.

It is known that serious questions in respect of Turkey’s participation in NATO, especially in light of Europe and America’s military adventures in Muslim lands abounds. Turkey has thus far been viewed as an outcast in Europe’s grand scheme.

The other contentious issue which appears to have divided broad based Muslim opinion is Turkey’s ongoing ties to Israel. Notwithstanding Erdogan’s strong rebuke and critique of Israel’s genocidal policies against Palestinians, Turkey’s ongoing relationship with Israel hasn’t set well with its supporters.

Lastly, the target of the coup was to destabilize the Turkish economy. In fact, the economic sabotage had earlier on been put in motion by some powerful countries in the west. If one studies the fluctuations of the Turkish Lira before and after the coup, it reveals a pattern that shows a well calculated plan to sink the Turkish Lira.