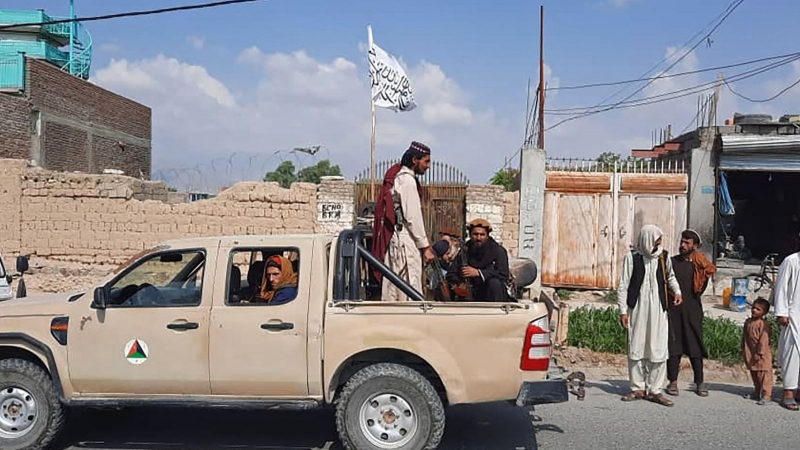 All peoples have the right to self-determination. By virtue of that right they freely determine their political status and freely pursue their economic, social and cultural development.

The Biden administration insists US draw down of troops stems from Trumps agreement with the Taliban in Doha last year February. Critics of his fumbling administration argue like climate change the new administration have in its power to reverse foreign policy if it had political will.

Taliban have been seizing control of rural villages and towns but its rapid pace of advancement to the gates of Kabul were completely unexpected. US/NATO intelligence failed dismally in this regard.

What is significant of the Doha agreement was that the US was aware of the unsustainability of the war in Afghanistan. It was only a matter of time before inevitable defeat.

The US did what it does best, greased both sides leaving the Afghan Government to resist against the offensive Taliban in a spiral of relentless strife and civil war.

But the plot failed. US and NATO leaders were caught off-guard in their intelligence.

Ashraf Ghani fled the presidential palace with feelings amongst Afghans of abandonment. There is some merit in his avoidance of bloodshed, whilst fearing for his life amidst motives of self enrichment.

Biden in his address to the American people spelled out conditions of civil war prevailing, but omitted the protagonist in the script, being the United States.

Afghanistan has substantial resources of strategic economic interest to the US and its NATO allies to have invaded Afghanistan and occupied it for 20 years.

The US plan to withdraw whilst from a safe distance perhaps rendering aerial support would certainly be on the Pentagons strategic objectives in keeping the Taliban in check.

Securing the Doha agreement was merely to ensure safe passage of US troops out of Afghanistan.

There was certainly no moral backbone in this US military withdrawal. The US had fully intended to sustain a proxy war.

The perennial neocolonial divide and rule policy severely backfired. The inept Biden openly admits US invasion of Afghanistan never sought nation building. Hence, protecting Afghan society, rights of women and girls were never part of the US agenda, but part of the pretext for something more sinister.

This certainly adds salt to a gaping open wound for ordinary Afghanis, a master plan by GW Bush / Rumsfeld administration in effecting regime change in keeping America safe. After all, resources and protecting regional interests were the prize.

This belligerent military occupation of Afghanistan over the last 20 years is a gross violation of international law. Mainstream media should provide credible news reporting and context to the situation unfolding.

The US are notorious agent provocateurs in war torn conflict, emanating in the Middle East and other parts of the world. Iraq comes to mind in effecting regime change suitable to the US and its allies’ regional interests. The Chilicot Report’s damning findings against former British Prime Minister Blair despite intelligence reports which did not establish, “beyond doubt” Iraq had weapons of mass destruction.

The incumbent US administration contradicts itself of ISIS / Al Qaeda, which again its genesis must be scrutinized of US intelligence involvement.

Nevertheless, these existential threats are juxtaposed to the decision to withdraw from Afghanistan because of objectives realised in terror cells not having metastasized.

There are no credible reasons underlying the decision to withdraw, but to reasonably conclude the Taliban overwhelmingly outmanoeuvred and convincingly defeated the US and its NATO allies.

US ATROCITIES, TORTURE AND ISLAMOPHOBIA

The War on Terror was a disdainful amoral sale to win international support in an unjustified war on attacking another country’s sovereignty.

US invasion was a gross violation of international law which undermines the aspirations of the Afghan people of their nationhood rights. Regime change and its imposed imported values onto a religious cultural society has brought greater harm than good.

The atrocities perpetrated by the US army, torture of political prisoners, and women in Bagram and Guantanamo prison are well documented, as is the distressing case of  Aafia Siddique  a  US citizen of Pakistani origin.

Mainstream media must be reminded of the gross violation of human rights under international human rights law and the Geneva conventions, perpetrated in those torture chambers where prisoners’ rights were utterly abrogated. The War on Terror rhetoric conceived Islamophobia, which actively exists and permeates in American and European society today.

Successive US Presidents have significantly contributed in one way or another to the Islamophobia narrative, culminating in the Trump’s administration open hate policy towards Muslims.

Water boarding and other inhumane torture practices conceptualised and executed during the GW Bush era violate the UN Convention Against Torture, constituting crimes against humanity.

Targeted killings and assassination through successive US administrations, spreads its own sui generis terrorism. This is hidden in the relentless media spin of the US and its NATO allies being custodians in protection of human rights.

US foreign policy and its support in military aid to apartheid Israel in its belligerent occupation of Palestine gives a completely different human rights testimony.

There can be no doubt in the aftermath of this spectacular defeat, we are witnessing – frantic scenes in the vicinity of Kabul International Airport ordinary Afghan families seeking refuge, a new life and SIVs who may be complicit in US occupation and perpetration of atrocities, despite undertakings of a benevolent general amnesty by the Taliban.

THE HOPE FOR THE FUTURE

The hope is for Afghanis to now realise the right of self determination enshrined in international law and determine a trajectory of economic and social upliftment to emancipate their war-torn country out of hardship.

The Afghan state must earn the respect amongst its neighbours and the global community of nations.

The Taliban of the past ruled with a highly incensed and politicised parochial interpretation of Islam is not denied. Many Muslims would agree that this does not conform to their understanding of the broader message of Islam to humanity.

The fears and concerns of thousands of Afghans illustrates the trepidation of Taliban rule of the 90’s.

Can this significant victory by the Taliban create an inclusive, just, humane and compassionate society with a functioning and viable political and economic state to survive in the 21st century and onwards?

Clearly the US imposed Afghan state collapsed for a number of reasons, counting systemic corruption and social class division as underlying causes.

Any move towards extreme ideology, disconnected from good conscience would receive the ire of the international community and global peace-loving Muslims alike. This approach will bring no success and further oppression on the Afghan people.

The legitimate concerns of the marginalised, women and girls, religious minorities previously targeted have every right to own a stake in a government to be formed acceptable to all Afghanis best interests, protecting their dignity and right to education.

So too, must we advocate for a just government to propel the aspirations of the Afghan people who have endured through so much over the last 40 years and more.

The proverbial adage – actions speak louder than words must hold true for a Taliban leadership aiming to gain support and legitimacy of the world through its reformed policies.

The victory in Afghanistan known as the ‘graveyard of empires’ is certainly to be echoed in the annals of history, where international law triumphs for the peoples right of self determination.

Media propaganda and false narratives which grossly undermine international law have succumbed through sincere grit, courage and attrition displayed by brave Taliban fighters and its leadership.

The hope and aspiration for self determination of achieving a nations full potential, with justice now seems realisable.