A COUP IN KHARTOUM: DOES IT SPELL THE END OF THE SO-CALLED “NORMALIZATION PROJECT WITH ZIONIST/APARTHEID ISRAEL? 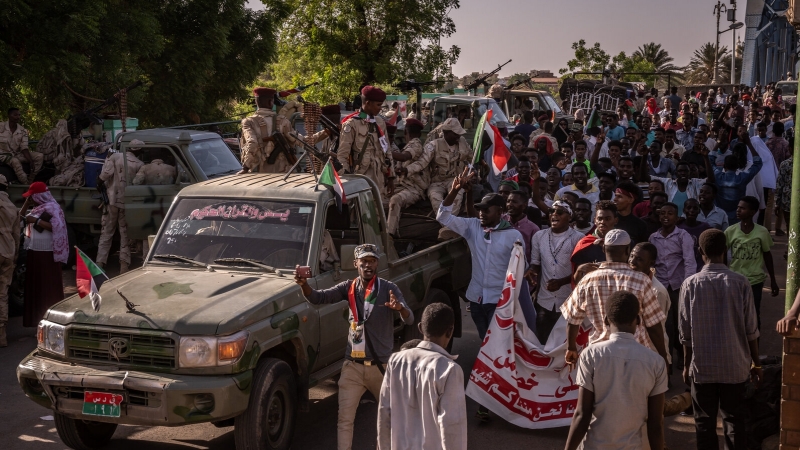 There has been a coup in Sudan. The military has overthrown the current government in Sudan. There are reports that the Prime Minister Abdalla Hamdok has been placed under house arrest for refusing to endorse the coup. Information is sketchy at the moment about who in the military is exactly behind this coup.

There were reports of the arrest of five other senior government figures, including Industry Minister Ibrahim al-Sheikh, Information Minister Hamza Baloul, and Mohammed al-Fiky Suliman, member of the country’s ruling transitional body, known as the Sovereign Council, as well as Faisal Mohammed Saleh, a media adviser to Hamdok.

They have also arrested Ayman Khalid, governor of the state containing the capital, Khartoum, according to the official Facebook page of his office.

There are two possibilities on who could be behind this coup. It could either be the former loyalists to former ousted president Omar al-Bashir or local forces opposed to the current military leadership playing gallery to the so-called “Abrahamic Accords” which seek to normalize ties between Sudan and Israel. If true, this could be a blow to the Saudi-Emirate axis that seeks to promote the so-called “normalization” move with Zionist/Apartheid Israel.

When Sudan joined the so called “normalization” bandwagon, there were huge demonstrations in Khartoum and many parts of the country against the move. However, the establishment in Khartoum ignored the people’s discontent and announced the normalization which was surreptiously forced on them by Washington.

We all knew that the USA/Zionist axis was just dangling the carrot stick to poor and starved Sudan, with promises of the removal of sanctions and new IMF loans to Sudan. However, it seems nothing much on those promises has come through and two years down the line, there is nothing to really talk about in that regard.

Economically, Poverty, unemployment still persists, if not worse for that matter. The youth have become so dejected as most of them do not see any future of prosperity despite all those promises of economic boom after the imposed “normalization” with Israel. This coup shows that there is more to it than meets the eye.

Sudan has been on edge since a failed coup plot last month unleashed bitter recriminations between military and civilian groups meant to be sharing power following the toppling of the country’s longtime leader Omar al-Bashir.

As usual, the toothless Arab League has released a statement condemning the coup. It said it was “deeply” concerned about the current military coup in Sudan. The Arab League is well known for saying something about nothing, and nothing happens. The Arab League itself is a “captured entity” that has since lost all credibility as far as the Arab people are concerned.

In the meantime, the United Nations (UN) has released a statement condemning and calling for the release of all “civilian leaders” and called it as an “unacceptable”. “I am deeply concerned about reports of an ongoing coup and attempts to undermine Sudan’s political transition. The reported detentions of the Prime Minister, government officials, and politicians are unacceptable,” said Volker Perthes, UN special representative to Sudan. “I call on the security forces to immediately release those who have been unlawfully detained or placed under house arrest,” he said in a statement on Twitter.

The European Union has expressed grave concern about a possible military takeover under way in Sudan. EU foreign affairs chief Josep Borrell said on Twitter that he’s following events in the northeast African nation with the “utmost concern”.

“The EU calls on all stakeholders and regional partners to put back on track the transition process,” Borrell wrote.

However, what boggles the mind is the apparent silence coming from our continental body, the African Union. As usual, they wait to hear from their handlers in Washington DC, London, and Paris about what to say. Almost all the continental bodies have released statements condemning the coup, yet the AU secretariat seems asleep. Are they perhaps suffering from hangovers?

When are they going to grow up? Our AU diplomats really amaze us, to them, it seems, working for the AU is just another job. They are not seized with the developments on the continent. It’s all about their salaries and working for themselves not the people of Africa. That is why we demand the dismissal of Mr. Mussa Faki Mahamat from the AU as a matter of urgency. We need serious people there if we expect the world to place any premium on the continent.