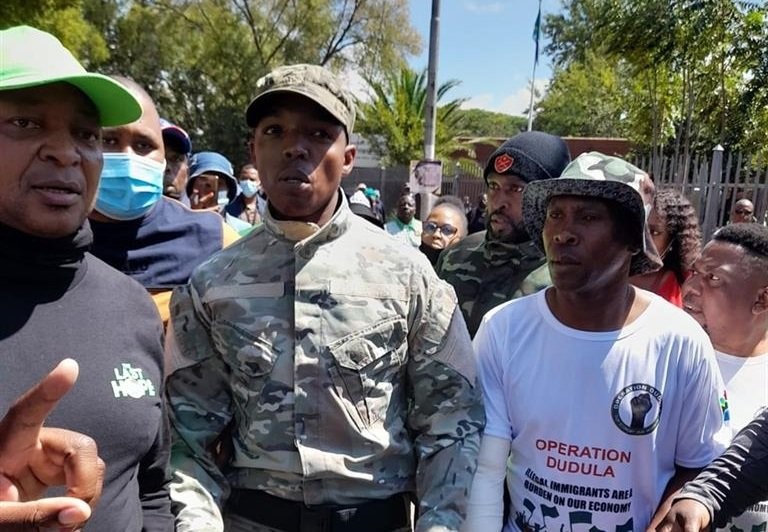 The ongoing operation Dudula currently going on in South Africa risk sinking South Africa into an abyss economically and politically. No country in the world enjoyed so much goodwill the world over as much as South Africa did. Today, such goodwill and respect is fast dwindling across Africa and the world because of the attitude of this government allowing and cheering on such nonsensical and stupid operations such as Dudula.

Since 2008, when the images of a burning Ernesto Alfaberto Nhamuave from Ramaphosa informal settlement were sent out to the entire world to see, the perception of the international community against South African blacks was tarnished forever. Across Africa, it’s even worse as many Africans are in disbelief that Africans can really exact such cruelty against other Africans in the name of jobs or food.

The first point of blame should go to the government of South Africa who always act late in dealing with such kinds of behavior. They let things escalate to a point that human life is lost before they act. In 2008, a similar thing happened and the government did not act until more than 65 foreign nationals and locals were killed. There are many instances that we can recall, and all showing government inaction.

In March 2019, the South African government launched its National Action Plan to Combat Racism, Racial Discrimination, Xenophobia and Related Intolerance (NAP). Among the actions the NAP identifies to be taken to combat xenophobia, are creating mechanisms to ensure foreigners receive services they are entitled to, facilitating their integration, and embracing a humane and dignified approach to managing migrants, refugees, and asylum seekers. However, implementation of the NAP should have included steps that could quickly and effectively improve accountability for perpetrators of abuse motivated by xenophobia and justice for its victims.

Concerning xenophobia targeting Zimbabweans, we wonder why government is allowing this psychopath Nhlanhla Lux Dlamini to move around the country tormenting Zimbabweans and other African nationals telling them to leave the country immediately when in the first place the same government did not renew their permits and gave them a grace period until December. Why then terrorize them burning their houses so that they sleep outside with their children in the rain, why not wait for December?

Nhlanhla deserves to rot in prison. Dressed in Army fatigues, he is going around pretending to be a tough military officer who knows what he is doing, when he is nothing but a criminal and a counterrevolutionary who is being used by racist whites. Who is funding Nhlanhla We wonder if he knows even how to use a pistol? Above all, he is a disgrace to the nation and the NPA must prosecute men like him for bringing the country into disrepute.

Some of these South Africans never cease to amaze me, they are honestly craze. How do you harass foreign truck drivers who are coming to pick up their trade merchandise in the port city of Durban? They forget that South African truck drivers also go to other countries delivering merchandise bought in South Africa by these same African countries whom you are killing here? What if those countries decide to make you test your own medicine in reverse xenophobia? Is that the Africa that we want?

You hear some of them arguing that we South Africans we never go to their countries, why do they come to ours and take away our jobs? Well, there are many South Africans living in other African countries too, and yet no one harasses let alone killing them. The problem of this kind of South African mind is that, they don’t travel at all to know this. What boggles the mind is that these groups only targets black Africans, and not the many other races who are illegally staying in South Africa. South Africa is home to a lot of illegal whites from Eastern Europe but no one will mention that. Is it not the disease called the Stockholm syndrome that they suffer from?

Another factor that the South African government should take note of is none other than corruption. This corruption is being perpetuated by the security apparatus in the country especially the police and Home Affairs officials. These two departments have been aiding and exacerbating corruption for the simple reason of fleecing cash from these same desperate illegal immigrants. Corruption is a big industry in South Africa.

Ninety percent of most illegal immigrants from African countries trooping into South Africa come through Beitbridge-Musina border post. And out of this, less than 1% use the unconventional routes down the Limpopo River. The remaining illegal immigrants, all go through the official border post without proper documentation, they just pay their way through.

The other worrying factor, though not proven, is the involvement of the ANC military veterans (Umkhonto Wesizwe) in these nefarious crimes. If it is true that the ANC’s veterans are involved in this, then I don’t understand what is South Africa? These people of whom the majority of them lived in exile in other African countries and yet find themselves accused in such lowly and degrading crimes like xenophobia? Don’t these veterans have something fruitful to do with their time?

South Africans should remember one thing that the world is watching you very closely and that you are what you are because of others. Without others you are nothing. Let me also take this opportunity to say that the majority of South Africans are very good people with a lot of love for others. Let us fight this xenophobia together and when these psychopaths like Dlamini come to you asking you to commit crimes like xenophobia, please refuse and chase them away from your communities. Aluta Continua!