Ukrainians fleeing to Israel will transform overnight into settlers and colonisers

Passengers disembark from an airplane carrying Jewish immigrants fleeing the war in Ukraine, upon arrival at Israel’s Ben Gurion Airport in Lod, near Tel Aviv, on 6 March 2022 (AFP)

Before the smoke could lift and the dead of World War I could be buried, the pogroms began.

Jews, wedged in a civil war that swept the Russian empire from 1918, were targeted in no less than 1,000 pogroms. They were blamed for World War I and the Russian Revolution of 1917. They were accused of hoarding food and wealth. They were harassed and beaten in their homes, sexually assaulted on the streets, and on hundreds of occasions, lined up and done away with. 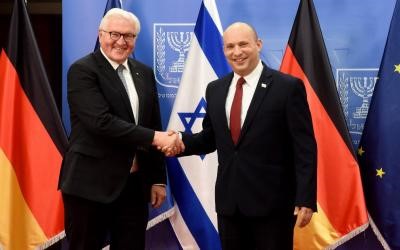 Germany: An enduring enemy of the Palestinian struggle

By 1921, historians estimate that more than 100,000 Ukrainian Jews were killed. The pogroms against Ukraine’s Jewish population had several consequences for Europe and world Jewry.

In his new book, In the Midst of Civilised Europe: The Pogroms of 1918-1921 and Onset of the Holocaust, published by Metropolitan Books, Chicago-based historian Jeffrey Veidlinger argues that the feverish violence inflicted upon Jews in Ukraine during the early 1920s set a precedent for the brutality of the years that followed.

The long history of Jewish persecution in Europe notwithstanding, the brazen violence against Jews in the pogroms after World War I was a bellwether for the Holocaust to come two decades later under Nazi Germany. In other words, the state-sanctioned mass murders under Adolf Hitler were primed by several smaller massacres at the hands of ordinary people and the armies fighting the Bolsheviks.

The pogroms against Ukrainian Jews, however, had another knock-on effect.

They nourished the urgency of creating a Jewish homeland, which had become an immense probability following the British takeover of Palestine from the Ottomans during World War I.

Ukrainian refugees in Israel, the same people who only just escaped war, hunger and foreign occupation today, will transform overnight into settlers and colonisers

The Balfour Declaration of 1917, Sumaya Awad and Annie Levin write in Palestine: A Socialist Introduction (Haymarket Books), was “the first official recognition of the Zionist settlements”. British support for a Jewish homeland precipitated the transfer of thousands of Jewish migrants to British-occupied Palestine.

The arrival of Jewish refugees perpetuated tensions with native Palestinians, who saw their land being ripped out from under their feet. It catalysed a series of skirmishes between the two communities, none better known than the Jaffa riot of 1921, in which 48 Palestinians and 47 Jews were killed.

Zionism, like other settler-colonial projects, was predicated on the dehumanisation of indigenous Palestinians. To the Jews who had fled Ukraine and elsewhere, Palestine was theirs, and therefore empty – and where it was populated by Palestinians, it was bereft of civilisation.

Veidlinger writes that Ukrainian Jews erroneously drew parallels between Palestinian resistance to the colonisation of their homes and the persecution they experienced back in Europe.

“Despite the numerous differences between the riot in Palestine and the pogroms of Ukraine – not the least of which was the high Arab death toll, which signalled a lethal brawl more than a pogrom – the notion that the violence in the Holy Land was just another pogrom established a myth that came to define the right-wing of the Zionist movement,” Veidlinger argues.

With the onset of Nazi Germany in the 1930s and then World War II, Jewish migration to Palestine became ever more “urgent”, even as other countries, such as the US, restricted Jewish immigration.

The Nazis killed an estimated 17 million people, including Jews, Russians, Poles, Roma, gay people, people with disabilities, among others. And even though, according to the Israeli daily Haaretz, Zionists had cooperated with German Nazis, the Holocaust became the most important attestation of Israel’s legitimacy.

“The Nazis had killed six million Jews, and the Zionist leadership, with [David] Ben-Gurion at its head, saw a unique opportunity to exploit Jewish suffering for the purpose of gaining world sympathy for the establishment of a Jewish homeland,” wrote Australian journalist Anthony Lowenstein.

Within days of the Russian invasion of Ukraine in late February 2022, little more than a century after the pogroms in Ukraine, the Israeli government invited Ukrainian Jews to make aliyah, or to fulfil their migration to the Holy Land. 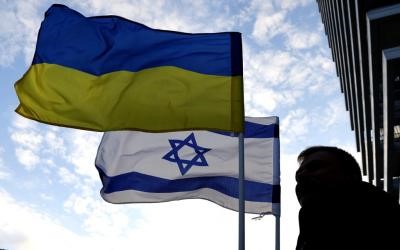 The West is right to hold Moscow to account for its crimes, but what about Israel?

They called it “Operation Israeli Guarantees” (Arvut Yisrael), based on Israel’s Law of Return, which guarantees Jews from any part of the world immediate citizenship based on their religion.

As was the case during World War II, it isn’t just Jews who are facing the calamity of war in eastern Europe. All of Ukraine’s 44 million people are facing an existential threat, as Russian forces invade via ground troops and terrifying air strikes.

Within 12 days, more than two million Ukrainians became refugees. “We call on the Jews of Ukraine to immigrate to Israel – your home,” said Israel’s Ministry of Aliyah and Integration. Likewise, Prime Minister Naftali Bennett described the state of Israel as “a refuge for Jews in distress”.

“This is our mission. We will meet this sacred mission this time as well,” Bennett said.

On cue, the World Zionist Organization’s settlement division said it would be building temporary homes for those who chose to make the journey. Likewise, Pnina Tamano-Shata, Israeli’s immigration and absorption minister, said the fate of Jews in Israel and Jews in the diaspora were “intertwined”. 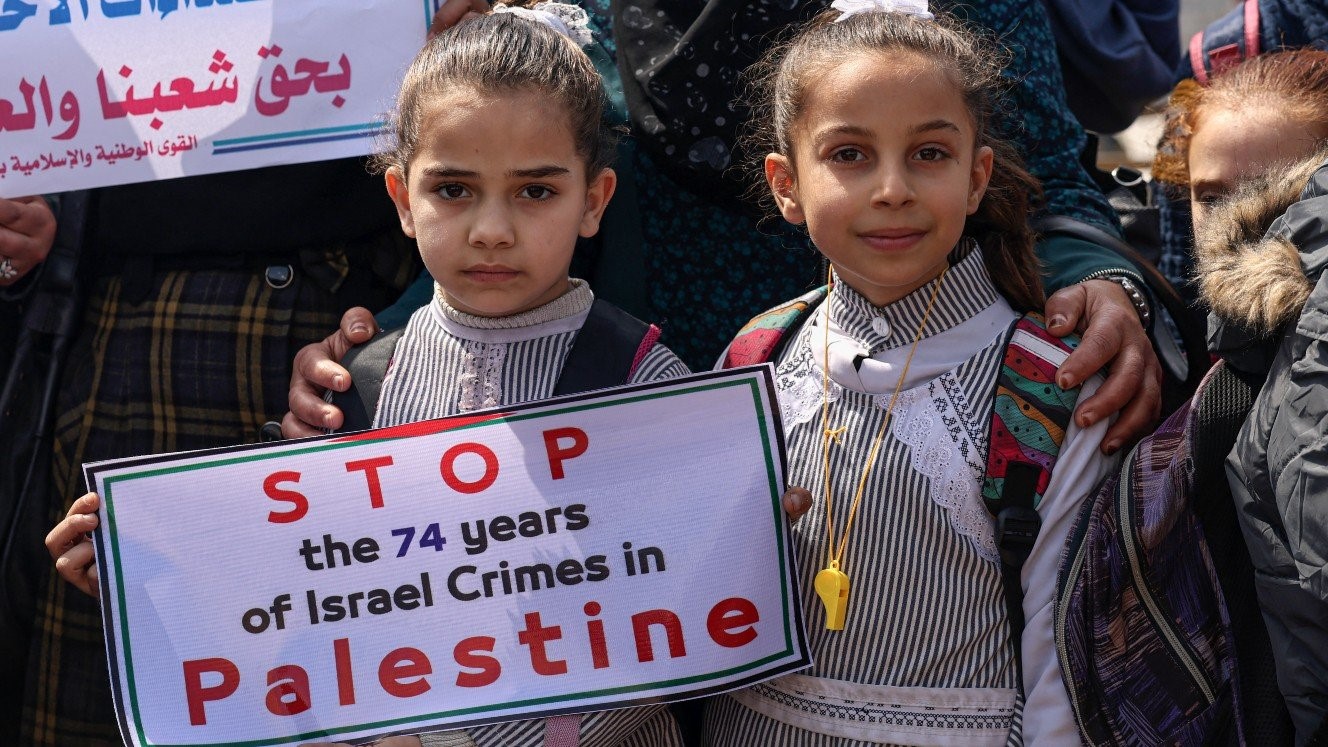 Palestinian children in Gaza lift placards demanding international support for Palestinians against Israel, similar to that shown for Ukrainians against Russia, on 7 March 2022 (AFP)

He added: “The ongoing fighting in Ukraine and the uncertainty require the State of Israel to prepare in accordance with the absorption of immigrants from Ukraine. Israel needs to take responsibility for the Jewish communities living there. This is what Israel did in the past, and this is what the Jewish state should do today.”

From refugees to settlers

At last count, at least 467 Ukrainian Jews had made the journey to Israel, as their compatriots had done a century ago.

These Ukrainian Jews, escaping war and chaos in Ukraine, will now be given shelter, food and protection, and asked to live on land taken from Palestinians

Estimates vary, but according to several sources, there are around 40,000 people in Ukraine who consider themselves Jewish, including President Volodymyr Zelensky. There may be four times as many with Jewish ancestry and, therefore, eligible for aliyah.

Israeli Interior Minister Ayelet Shaked said this week that around 100,000 Ukrainian Jews could make their way to the country and become citizens.

Ukrainian Jews, escaping war and chaos in Ukraine, will now be given shelter, food and protection, and asked to live on land taken from Palestinians. Some will eventually live on recently stolen land, known as illegal settlements in the occupied Palestinian territories, in violation of international law.

According to the WZO’s settlement division, the new arrivals will be placed in settlements in the occupied Golan Heights, the Negev, Arava, the Valley of Springs, and the Jordan Valley.

Already, families have moved into Nazareth Illit (now Nof Hagalil), on land stolen from the nearby town of Nazareth in the 1950s, as part of a larger attempt to “Judaise” and suppress Palestinian development and growth in the region. At the time, the area was made up predominantly of Palestinians. 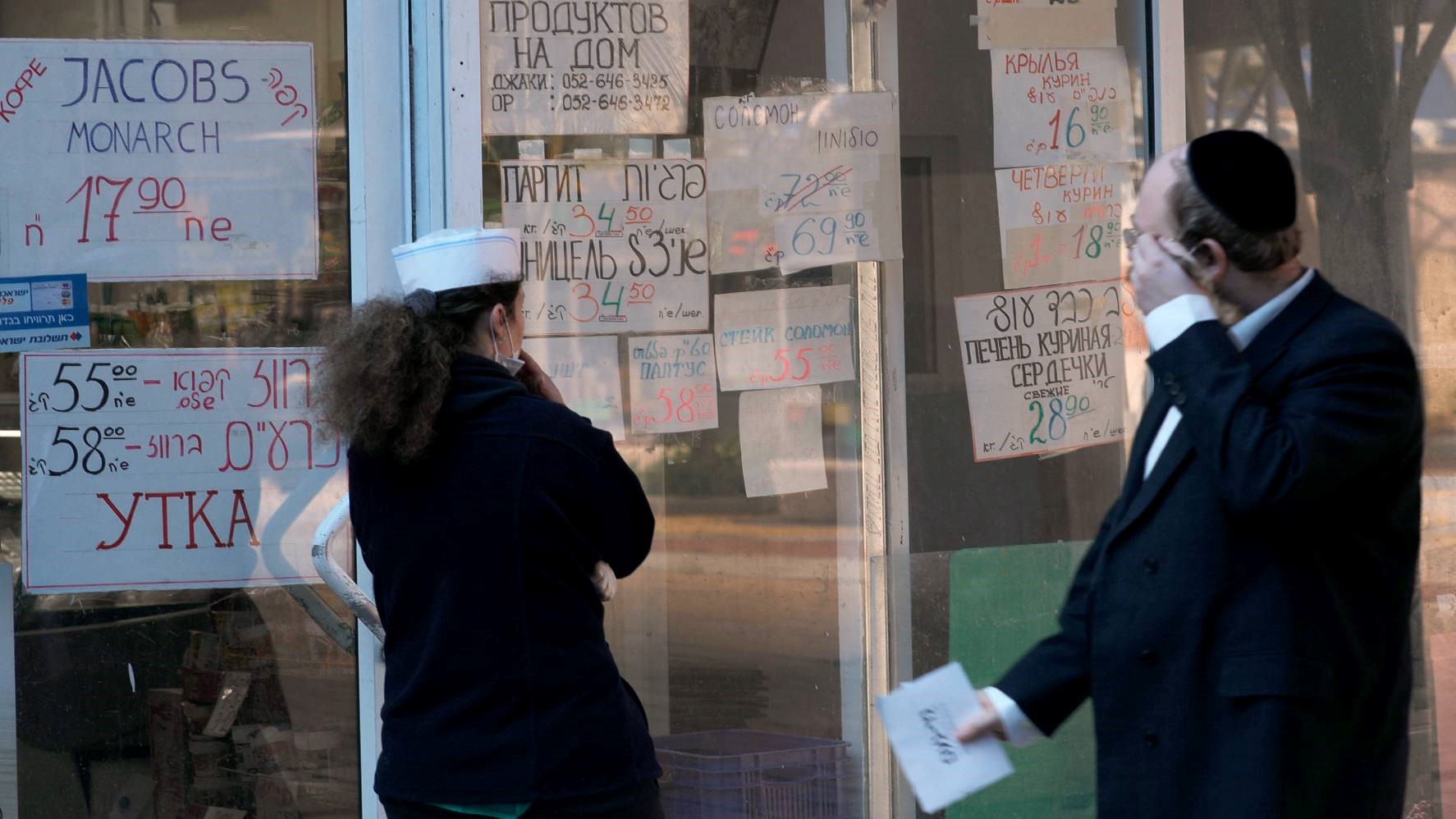 A Russian shop is pictured in the Israeli northern town of Nof Hagalil, which will welcome refugees fleeing the war in Ukraine, on 6 March 2022 (AFP)

Others will potentially move into previously stolen land built on the villages ethnically cleansed when Israel was created in historic Palestine in 1948. Around 750,000 Palestinians were expelled in 1948 to make way for the state of Israel.

And like their predecessors who arrived a century ago, they will come to imbibe the Zionist belief that the land was empty; that the Palestinians expelled in 1948, around five million of whom are still languishing in refugee camps, or who are living in different parts of the world and unable to return to their homes, or who are living as prisoners in blockaded Gaza, are threats to their existence as Jews.

In other words, the same people who only just escaped war, hunger and foreign occupation today will transform overnight into settlers and colonisers. They will simply slot into Israel’s system of institutionalised segregation and discrimination, known as apartheid.

Absorbing Jews from around the world is not a humanitarian gesture; it is a strategic policy. It reinforces Israel as a Jewish homeland

Make no mistake: ordinary Ukrainians are paying the price in a war between two frail empires struggling for dominance and relevance.

But even in this moment of global emergency, in which immediate actions must be taken to save civilian lives in Ukraine, there is absolutely no reason that Palestinians should also be made to bear the costs of this conflict.

Absorbing Jews from around the world is not a humanitarian gesture by Israel; it is a strategic policy. It reinforces Israel as a Jewish homeland.

Israel cannot be allowed to instrumentalise the Russia-Ukraine conflict to populate Palestinian land with more Jews, in order to consolidate what Lana Tatour, professor of settler-colonialism and human rights at the University of New South Wales in Sydney, describes as “demographic superiority”.

But then, a century on, who are we even fooling?

Israel has survived and thrived as a settler-colonial state, and built its legitimacy and credibility as a liberal democracy despite its racist policies, because Britain, France and the US in particular have never recognised Palestinians as relevant, or human, in the first place.

The views expressed in this article belong to the author and do not necessarily reflect the editorial policy of Middle East Eye.

Azad Essa
Azad Essa is a senior reporter for Middle East Eye based in New York City. He worked for Al Jazeera English between 2010-2018 covering southern and central Africa for the network. He is the author of the 'The Moslems are Coming' (Harper Collins India) and 'Zuma's Bastard' (Two Dogs Books).

Latest posts by Azad Essa (see all)
Share this on WhatsApp