Shireen Abu Akleh was a voice for Palestine. Israeli police didn’t let them mourn in peace. 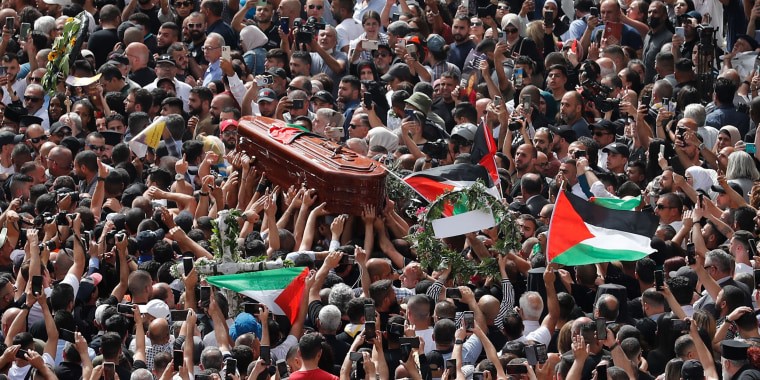 Thousands of mourners gathered in East Jerusalem Friday to pay their final respects to Palestinian American and veteran Al Jazeera correspondent Shireen Abu Akleh. Abu Akleh, one of Palestinians’ most beloved icons, was killed Wednesday while reporting on an Israeli military raid in the occupied West Bank. Abu Akleh was reporting from Jenin when, according to eyewitnesses, other journalists, the Al Jazeera Network and the Palestinian government, she was shot and killed by Israeli troops operating in there.

There is rarely, if ever, any justice for the killing of Palestinians, whether they are American or not.

After initially blaming Palestinian militants and denying responsibility, Israeli authorities said they’d investigate the possibility that the shot that killed the journalist was fired by an Israeli soldier.

Like any funeral, the procession was expected to be somber, a moment for this beloved national figure to be buried with peace and dignity and expected to be a chance for a grieving people to collectively close the chapter on yet another Palestinian life cut short by senseless violence in an occupation that shows no mercy in life or as they saw Friday, even after death.

Mourners gathered at the Saint Joseph French Hospital to escort her through the Old City to the Church of the Ascension for prayers and then to her final resting place in a cemetery on the Mount of Olives.

Let that sink in. A nuclear-armed power, with one of the world’s most powerful militaries feared a flag-draped coffin. Israeli police wanted to deny Abu Akleh’s family and the public from publicly grieving the national icon and journalistic hero because they didn’t want her funeral to serve as a reminder of the national cause for liberation, dignity and independence.

When mourners poured out of the house carrying the flag draped coffin and began to chant, the police moved in to block the procession from advancing. Video shows police attacking mourners and pallbearers, beating them with batons, and at one point, almost causing pallbearers to drop the coffin.

Video released by the police to justify the attack shows one Palestinian throwing what appears to be a bottle in the direction of the police who were attacking the mourners.

This is what a dehumanizing occupation looks like. It deprives Palestinians even of their right to mourn, their right to express grief in whatever way brings them comfort and closure. This is what it means to be oppressed, to have one’s cultural expressions subject to the state’s approval and to be subject to violence from the state for breaking those rules. This is what it means to be mastered, to be subjugated, to be silenced by a state that shows its force with bullets, batons, bulldozers and bombs.

But this is not new. Israel has, for years, unofficially prohibited the expression of Palestinian identity and culture in occupied East Jerusalem out of fear that such public expressions could undermine its attempt to control the society and derail its plan to demographically alter Jerusalem’s ethnic composition and skew it in favor of the Jewish state. Israel’s wishful thinking is that by prohibiting symbols and expression of Palestinian identity and nationality, it can cause Palestinian character to be permanently ripped out of the city’s ancient fabric.

Imagine that same country, the one that is denying Palestinians a right to express themselves freely, conducting an investigation and promising to deliver justice to the family of the journalist the country itself is accused of killing.

Time and time again we have seen the Israeli military operate with impunity in the occupied Palestinian territories.

Time and time again we have seen the Israeli military operate with impunity in the occupied Palestinian territories. No officers are held accountable. No justice is served.

Also, time and time again, American officials condemn Israeli abuses and call for investigations into them, but there is rarely, if ever, any justice for the killing of Palestinians, whether they are American or not.

Israel’s track record of violence against journalists in particular is equally horrendous. Abu Akleh is perhaps the most high-profile journalist to be killed there, but she is by no means the first. The Committee to Protect Journalists says an estimated 19 journalists have been killed in Israel and the occupied Palestinian Territories since 1992. Many more have been attacked.

Reporters without Borders, which ranks Israel in the bottom half of its ranking for press freedom — 86 out of 180 countries — says: “Palestinian journalists are systematically subjected to violence as a result of their coverage of events in the West Bank.”

Ayman Mohyeldin on the killing of journalist Shireen Abu Akleh: ‘Her humanity was unmatched’

A 2019 report by the United Nations Human Rights Council noted that “The commission found reasonable grounds to believe that Israeli snipers shot journalists intentionally despite seeing that they were clearly marked as such” during the 2018 protests along the border of the Gaza Strip and Israel. The reports list four particular individuals who were wearing helmets and flak jackets.

However, the incidents — and narratives — surrounding Abu Akleh’s death and the actions by Israeli security forces during her funeral highlight the nature of this depraved occupation.

For now, the family will have to deal not only with the killing of their daughter but the dehumanization of their moment of profound grief in front of the world.