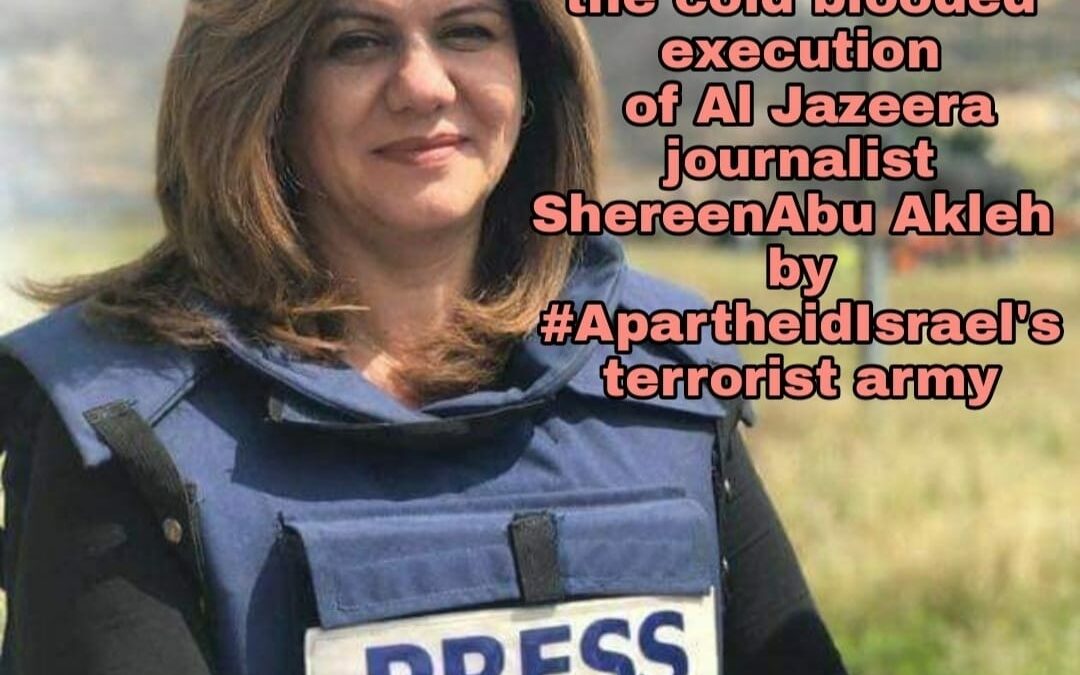 Since the shattering news broke about the brutal killing of one of Palestine’s most iconic journalists, an unmistakable sense of anger began to surface across news rooms in the Arab world and in many different parts of the world, including South Africa.

Shereen Abu Akleh had been on assignment covering the settler colonial regime’s military raid in Jenin within the Occupied Palestinian Territory when she was assassinated in cold blood.

From eye witness accounts by her colleagues who were on the beat with her, it is clear that Shereen was specifically targeted. Her death was neither accidental nor the result of a firefight between Palestinian resistance and the occupying army.

She died due to a premeditated plan by the Bennett regime to assassinate her.

Shereen Abu Akleh’s profession required impeccable, accurate and honest reporting, which she discharged with great integrity. Her courage and determination to bring into the living rooms of millions within the Arabian Peninsula and beyond, the unspeakable horrors flowing from Israel’s illegal occupation, stood as a bulwark against the Zionist regime’s goals to avoid public scrutiny.

Her on-the-spot coverage of daily violations by the apartheid regime including detentions, home demolitions, military raids and killings of Palestinians, placed her in the crosshairs of Israel’s terrorist army.

Born and raised in Jerusalem, Shereen Abu Akleh knew every nook and corner of Occupied Palestine as well as ’48 Palestine. Her grasp of the territories including her vast knowledge of the history associated with the Nakba, made her an invaluable part of Al Jazeera’s team.

Resourceful and professional to the core, Abu Akleh’s iconic status was unrivalled. Tributes that have poured in and continue to abound via social media and mainstream platforms, acknowledge her profound humanity.

In honouring her legacy, media houses and the entire fraternity who are serious about journalism, will need to discard the fear of being smeared as anti-Semites by courageously reporting the reality of Israel’s brutality.

The shock and horror of Israel’s savage attack on the funeral procession in full view of a global audience, cannot be reduced to “clashes” as some media reports suggest. To describe a full frontal violent assault by armed Israeli troops on mourners carrying Shereen Abu Akleh’s casket to her final resting place, as “clashes” is not only deceptive but an insult to her memory.

It needs to be called out as a blatant violation of her right to a dignified and peaceful funeral.

The assassination of Shereen Abu Akleh places an onerous responsibility on the shoulders of journalists armed with their pens and cameras to not flinch in the face of brutal suppression.

Her untimely death has allowed the world to witness a colonial settler regime that to date has escaped consequences for its gross violations and abuses of fundamental human rights.

Unless this changes, expect Israel’s illegal occupation and war crimes to continue unabated. The agency of change possessed by media activists must thus be utilised to the optimum.

It cannot and dare not be a passing phase which is obliterated and forgotten once the cameras move on.

We owe it to her and the thousands of journalists across the world to ensure that their unique role in highlighting injustice, oppression and abuse of power, remains as a testament of commitment to truth and integrity.

As a journalist at Al Jazeera for more than two decades, Shereen had become a household name among millions who loved, respected and deeply revered her professionalism.

South Africa has been no exception.

In a fitting tribute, Palestinians as a collective mourn her loss by reminding us about the special place Shireen Abu Akleh’s had in their lives since 1997 – bringing to their homes the horrors of the occupation and the courage of those resisting it.

“Her reports debunked, indeed ridiculed, the official Israel narrative about the daily human rights abuses in the West Bank and inside Israel. No wonder, she was targeted while doing what she always did, speaking truth to power. Her reports will be an essential part of the archives of Palestine in general and that of the occupation in particular; this they will not be able to kill or erase.”