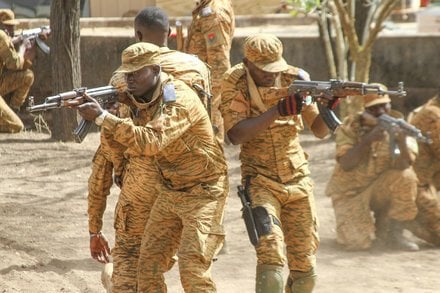 News that France is busy destroying mining equipment including cars at a mine that the Burkinabe government has announced it will nationalize, really boggles the mind. This reminds us of what we have been telling the people of Africa all along that, they are not our friends at all. We should not be moved by their lies that ‘they are with us’, all that they want is our resources, which they want to have in full control.

Across Africa, many of our leaders are tricked or bribed to sign concessions to these former colonial masters to cede vital natural resources in the hands of the imperial masters to do as they wish. How would people who are always saying we stand with Africa do something of this sort?

A video has since emerged online showing the French destroying equipment at a farm that the current Burkinabe government has nationalized. One by one, many of these former French colonies are breaking away from the yoke of slavery that has been imposed by France on all its former colonies in West Africa.

Can’t they donate those cars to some charities or orphanages in the country? If they say they have compassion for Africa, why destroy assets that can be put to good use by other sectors of a country that they have helped to impoverish in the first place? France’s exploitation of its former colonies is well known and we have wondering when it will end.

Recently there has a move by many of these former French colonies to try and break away from this York of bondage that they have been subjected to since many of them gained their so-called independence. First it was Mali, and now it’s Burkina Faso. We pray all of them to pursue a truly independent path and adopt people centered policies that puts their own citizens first.

The French have been pursuing these oppressive kind of policies on their former colonies which continues to milk them of their riches in order to satisfy their domestic constituencies of letting the French people live in affluence at the expense of poor black people in French West Africa. The writing is now on wall as many Africans are slowly waking up from their slumber to see through this.

However, blame must not only be apportioned on these national leaders who might be either ignorant or are corrupted by these former imperial masters or are bribed outright. The blame must equally lie at the door of the African Union Commission which is tasked by the people of Africa to run the affairs of Africa. Why hasn’t the AUC picked up on this? We are aware that even those who are currently running the AUC are from the former French colonies. Indeed some of them, were in very high positions in their countries before moving to the AUC.

The African Union (AU) needs to learn to do things for the benefit of their people on the continent, Africans. The EU, and USA will always do things at least to appease their home constituencies as can be seen by the support the USA government receives from their people when they fight their oil wars in the Middle East. It’s because in one way or another, their people have been benefiting from the cheap oil provided to them by their government.

Today Africans are slaughtered abroad by the likes of imperial Morocco who slaughtered over 100 Africans at the Morocco/Spain border, and we heard nothing of a condemnation from the AUC, instead Morocco was rewarded by being given the rotational AUC Peace and Security Council rotational seat. Recently, mass graves of African were discovered at that country’s border with Yemen and still we heard no word of condemnation from our continental body.

Those at the helm of leadership at the AUC must do their job or else they should leave immediately.  Aluta Continua!