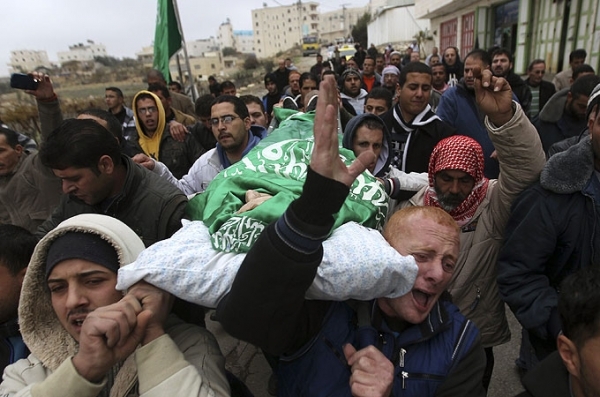 Dozens of Palestinian youths were reported to have thrown stones and bottles at the soldiers early on Thursday morning, while Associated Press news agency reported that the Israeli soldiers had responded by firing tear gas on the youths.

Five Palestinians were hospitalised after the clashes, reported Ma’an News Agency. Thursday’s clashes came ahead of the funeral for 17-year-old Palestinian, Muhammad Ziad Awad Salaymah, who was shot dead by an Israeli policewoman at a checkpoint in the city on Wednesday, for allegedly carrying a gun which later turned out to be “fake”.

Some news agencies reported that Salaymah had been shot up to six times. Micky Rosenfeld, a spokesman for Israeli police, said on Wednesday that an initial investigation indicated “[Salaymah] pulled a fake pistol. They [troops at the scene] thought it was real.” Palestinians, however, said Salaymah was unarmed, and had failed to heed orders to halt at a military checkpoint because he was hard of hearing.

Protests against the shooting broke out in the Old City on Wednesday night, with Israeli forces using tear gas and live ammunition to quell the demonstrations. “They have orders to shoot with live bullets now,” a resident of Hebron told Al Jazeera on Wednesday. Tensions were still high on Thursday in the southern West Bank city. SAPA