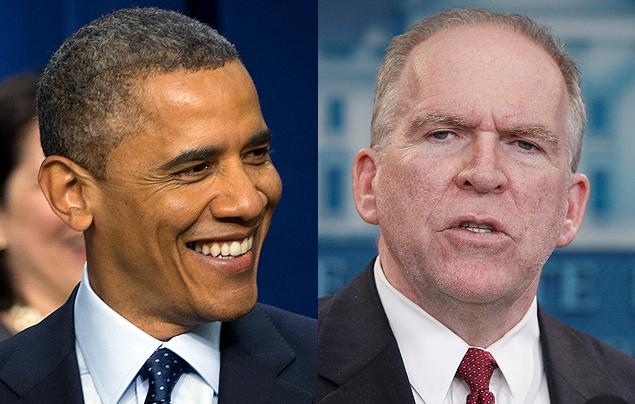 (By Barry Grey – January 08, 2013 “Information Clearing House”) – – President Barack Obama on Monday named his counterterrorism chief, John Brennan, to head the Central Intelligence Agency in his second term. In choosing Brennan to lead the spy agency, Obama gave a clear signal that he intends to expand the illegal program of drone assassinations that has already killed thousands of innocent civilians—men, women and children—and mutilated thousands more in Afghanistan, Pakistan, Yemen and Somalia.

Among those murdered on the say-so of the president, without any charges or judicial process, are at least three US citizens, including the New Mexico-born cleric Anwar al-Awlaki and his 16-year old son, obliterated by drone-fired missiles in Yemen.

Brennan, in his capacity as Obama’s deputy national security adviser for homeland security and counterterrorism, has headed up the targeted assassination program. He has overseen, in collaboration with the president, the Pentagon and other security agencies, the selection of alleged terrorists marked for extermination. The White House and Justice Department claim that the president has the right to unilaterally order the killing of any individual, anywhere in the world, as part of the so-called “war on terror.”

This open repudiation of the most basic democratic rights and assertion of dictatorial powers has evoked no serious opposition from any section of the liberal establishment or its pseudo-left periphery. Senate confirmation of Brennan as CIA director is considered a foregone conclusion.

Obama paired his White House announcement of Brennan as the permanent replacement for retired General David Petraeus, who resigned his CIA post last November over a sex scandal, with the naming of former Republican Senator Chuck Hagel to replace Leon Panetta as secretary of defense. Hagel’s nomination is considered far more controversial than that of Brennan in establishment political and media circles, although it is anticipated that he will win Senate approval.

Hagel, a Vietnam War veteran with close ties to the military, is currently co-chairman of Obama’s intelligence advisory board. He is under attack from sections of the Republican Party because he opposed George W. Bush’s conduct of the Iraq war as well as the unilateral imposition of sanctions on Iran.

He has been criticized by Zionist lobby groups as being insufficiently pro-Israel, although he voted for every aid package to Israel during his 12 years as a senator from Nebraska. He is also being criticized by gay rights groups for having formerly supported bans on gay marriages and having once opposed the nomination of an openly gay ambassador.

In his remarks Monday, Obama once again boasted of “taking out Osama bin Laden,” an operation that was overseen by Brennan. He again invoked the “war on terror” to justify war crimes abroad and the ripping up of democratic rights at home, ignoring the de facto alliance Washington has established with Al Qaeda-linked jihadist elements in Libya and Syria.

With unbridled cynicism, Obama declared: “There’s another reason I value John so much, and that is his integrity and his commitment to the values that define us as Americans. He has worked to embed our efforts in a strong legal framework. He understands we are a nation of laws.”

Brennan, a CIA operative for 25 years who for a time headed the agency’s station in Saudi Arabia, was deputy executive director of the CIA during George W. Bush’s first term, as well as director of the National Counterterrorism Center.

Prior to his first inauguration in January 2009, Obama was preparing to name Brennan to head the CIA, but pulled back because of the political fallout from choosing an official deeply implicated in Bush’s policies of torture, targeted killings and military detention at gulags such as Guantanamo. Given that Obama had campaigned as a critic of these abuses, it was considered too soon to make such move. Instead, Obama gave Brennan the top White House counterterrorism post, which did not require Senate confirmation.

Now, four years later, having expanded and institutionalized the use of assassination and torture as instruments of foreign policy, as well as the police state methods and structures initiated under Bush, Obama is justifiably confident he will face no serious opposition from any section of the political establishment to elevating Brennan to the top intelligence post.

Last October, the Washington Post published a series of articles exposing the establishment by the administration of the “Disposition Matrix,” described as a new system that is “codifying and streamlining” the extrajudicial killings carried out on the orders of the president. The series pointed to Brennan as the individual playing the leading role in this program. Brennan, the newspaper wrote, wields “enormous power in shaping decisions on ‘kill’ lists and the allocation of armed drones, the war’s signature weapon.”

Brennan is the only administration official to date who has offered a detailed public defense of the assassination program. In an April 30 speech at the Woodrow Wilson Center in Washington, he claimed that the drone strikes were legal under the Authorization for Use of Military Force passed by Congress after the September 11, 2001 attacks, the all-purpose pseudo-legal justification for war crimes and violations of the US Constitution used repeatedly by the Bush administration.

But Brennan went further, saying: “There is nothing in international law that bans the use of remotely piloted aircraft for this purpose or that prohibits us from using lethal force against our enemies outside of an active battlefield, at least when the country involved consents or is unable or unwilling to take action against the threat.” Since any country that does not “consent” is thereby “unwilling,” this description applies to every country in the world.

He went on to assert that this license to kill was “ethical” because of “the unprecedented ability of remotely piloted aircraft to precisely target a military objective while minimizing collateral damage…” If this latter claim is true, the conclusion that must follow is that the US is deliberately targeting ordinary men, women and children for destruction as “military objectives.”

Obama announced his appointment of Brennan just days after he signed into law a new Pentagon funding bill allowing for the indefinite military detention without charges or judicial review of individuals declared to be terrorists, including American citizens, while barring the closure of the Guantanamo Bay prison camp. It also followed new drone strikes in Pakistan and Yemen, where on Friday tribesmen protested against the omnipresent threat of sudden death from the skies and told Reuters that seven civilians had been killed.

The CNN web site reported Monday that the administration was now considering extending drone strikes into the African nation of Mali, where an Al Qaeda-linked militia has taken control of much of the country’s north.