“If you wanted to live, you left” 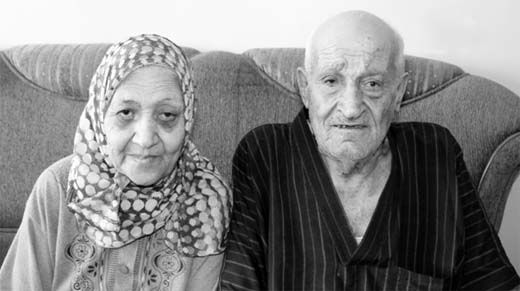 Nakba Day (15 May), the day on which Palestinians mourn the loss of their homeland in 1948.

65 years ago, in May of 1948, Ghatheyya Mifleh al-Khawalda was a carefree 15-year-old girl who lived with her mother and sister in the village of al-Qastina in Mandatory Palestine, when they were forced, along with the rest of their village, to flee in the face of imminent threat from Jewish militias. For some time, the people of al-Qastina had received word of terrible attacks against other villages nearby, in which many had died. Fearing a similar fate, they left their home, and would never return to live there again. They became victims of what is referred to as the Nakba, meaning ‘catastrophe’, the mass forced displacement of Palestinians from their homes in order to make way for citizens of the Jewish State of Israel which would be established soon afterwards.

Though Ghatheyya remembers her childhood with joy, her life has been marked by suffering since the day she was born: “While my mother was giving birth to me, my grandmother died. The following morning, it was Eid al-Adha. My father went out for his morning prayers, but he never returned. They found him dead where he had been praying. Still, I had a very happy childhood in al-Qastina. We had a very nice house, a big house with marble floors in the hallway. My father had been a farmer, and we had farmlands with orange trees, apple trees, grapefruit trees and others. I used to spend my days playing with my sister and the other girls in the village. We were very happy.”

This changed dramatically in 1948, with the arrival of Jewish militias, who were attacking Palestinian villages and clearing them of their inhabitants: “We had heard stories about attacks on other villages. Still, the attack on al-Qastina came without warning. Before that, there had been a British military camp nearby, but that year the British left and allowed the Jewish groups to take over. We were terrified of what they might do to us. They arrived, some of them in uniform and some in civilian clothes, and began shooting at people. Three people were killed. They were all civilians. We ran away, afraid for our safety, and went to Tal es-Safi, a nearby village on a hill. It was within walking distance, and we were in a hurry to leave, so we didn’t take anything with us. It was like Doomsday. It was utter terror. People’s minds were imprisoned by fear. We couldn’t think of anything except leaving, not even simple things like bringing food with us. In the chaos, some families couldn’t find some of their children and had to leave without them. Many were too afraid to return to find them, while others snuck down the hill at night-time to try to rescue them. We stayed in Tal es-Safi for a few days, sleeping at night-time in the open air with no blankets, mattresses, food, or water.”

The people of al-Qastina were not able to stay long in Tal es-Safi: “We stayed there for a few nights, maybe a week, but then the settlers came and we had to run again. The choice was simple. If you wanted to die, you stayed. If you wanted to live, you left. We managed to spend one night in Beit Jibrin before the settlers caught up with us. Anywhere we went, they chased us to the next place. Their main aim was not to kill us, but to get rid of us. If they had wanted us all dead, not one of us would have survived. They used fear to force us to leave our land. If a person died, we had to leave the body behind. We couldn’t go back for someone who was dead. We had to focus on surviving. We were joined by people from other villages, from Isdod and al-Majdal Asqalan. We walked along the coast until we reached Gaza.”

The Jewish groups did not follow the fleeing Palestinians to Gaza, where Ghatheyya and her family were forced to make a new life: “Finally, we could stop running. There were many thousands of us. We slept in mosques, on the streets, in the dirt. There were so many people everywhere. Some people stayed with families from Gaza. Others had nowhere to go. The United Nations Relief Works Agency (UNRWA) began to build tents for families. They gathered the people from my village together in one compound and called us refugees. The size of your tent depended on how big your family was. You weren’t allowed to take in other families to live with you.”

Though she was grateful to have survived and found refuge, for Ghatheyya, the Gaza Strip would never replace her hometown of al-Qastina: “Everyone in Gaza knew I was a refugee. It wasn’t a big deal. But Gaza never felt like home to me. I used to see my aunt sitting in front of her tent every day, crying. When I asked her what was wrong, she said: “Look at us. Instead of a house, we now have a tent. I wish we could have carried our houses with us on our heads.” We lived a fairly primitive life there. There was no work available for the men. We expected the situation to be temporary so we just tried to get by and live through it until we figured out what would happen next. UNRWA gave us cans of food and bags of rice. We used a makeshift stove to heat our food, but it did not work very well. We had to keep blowing on it to keep the flames alive. After a time, UNRWA bought pieces of land from people from Gaza for the refugees. They gave the families the construction materials and we built the houses ourselves. We built our home in Maghazi in the Middle Area.”

Two years after fleeing her home, Ghatheyya received a proposal of marriage from a young man who also came from al-Qastina, Ahmed Sa’id al-Khawalda. She accepted and they were married soon afterwards: “Ahmed’s family were still living in a tent, so I went from living in my family’s new home back to living in a tent with him and his family. When I became pregnant with our first child, he began building our first house in Khan Younis. I gave birth to our daughter in our new home. Altogether, we had four sons and two daughters. There was no work for Ahmed so his father provided for us. He had a job distributing food for UNRWA. Ahmed and I did our best to look after our children.”

Ghatheyya and Ahmed now have 32 grandchildren. All of the family still live in the Gaza Strip, though Ghatheyya becomes emotional when she speaks of how her eldest daughter died of cancer several years ago. The elderly couple live with their son, Nehad (40), his wife, and their three children. Another of their sons lives in the apartment above them.

Yet, Ghatheyya still dreams of her home in al-Qastina. She has had the chance to see her old village several times since 1948, passing through the town in taxis in the 1980s and early 1990s, when accompanying her daughter to Jordan for medical treatment. “The first time I asked the taxi driver to bring me there, he refused, saying it was too far out of the way. After that, I would pretend I was only going to al-Qastina, to make sure that the driver would bring me there and I could see my home. I didn’t have time to try to find my old house, as we would just pass down the main street in the car. Sometimes, the driver would only drive on the highway nearby, so I just saw the outline of the village. Of course, I recognised my home, although the only place that was still the same was an old car garage. I am not allowed to go there anymore, but I still think about my village after all these years. Al-Qastina crosses my mind very often. It doesn’t make sense that I cannot be in my home, on my land, in the place where I grew up. I still dream of the days of the land.”

It is estimated that some 725,000 Palestinians were forcibly displaced from their homes during the Nakba of I948. Under the operational definition of the United Nations Relief Works Agency (UNRWA), Palestinian refugees are people whose normal place of residence was Palestine between June 1946 and May 1948, who lost both their homes and means of livelihood as a result of the 1948 Arab-Israeli conflict. The descendants of the original Palestine refugees are also eligible for registration. As of 1 January 2013, there were 4,919,917 Palestinian refugees registered with UNRWA. 1,203,135 of them live in the Gaza Strip.

Under international law, all individuals have a fundamental right to return to their homes whenever they have become displaced due to reasons out of their control. The obligation of states to respect the individual’s right of return is a customary norm of international law. The right of return for Palestinian refugees specifically is affirmed in UN General Assembly Resolution 194 of 1948, which “[r]esolves that the refugees wishing to return to their homes and live at peace with their neighbours should be permitted to do so at the earliest practicable date.” The resolution also provides that the responsible authorities should compensate refugees who choose not to return, or who suffered damage or loss to their property.