KASHMIR – A blind spot for how long? 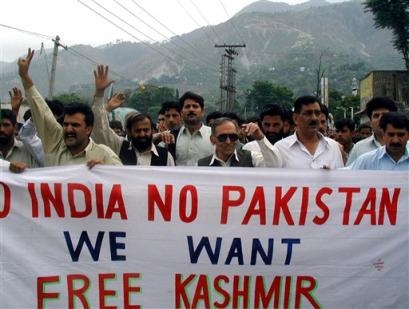 In his autobiography “A Fortunate Man”, the late Ismail Meer whom Nelson Mandela had described as a man of great integrity and a close friend, made a very poignant observation: “India is free of the British, I thought, but British domination remains”.

Though it was not in reference to the fast worsening situation in Indian occupied Kashmir, Meer’s insightful remark does point to the overbearing influence resulting from an entrenched history of colonial British Raj.

What’s described today as the Kashmir “dispute” is far removed from the ugly reality of war and occupation that has dominated relations between India and Pakistan from the moment these two countries first came into being in 1947 as successors to the old British Indian Empire, says author and historian Alastair Lamb.

Though there has been close and intimate interaction between activists in South Africa’s freedom struggle and the movement that spearheaded India’s hard fought struggle for independence, much of the tragedy of Kashmir remained a blind spot as debates and loyalties reflected varying opinions among SA Indians.

Yet despite such intense collaboration that allowed SA Indians to embrace the sub-continent’s independence struggle and retained unconditional support against apartheid by a free India, why has the predicament facing Kashmir’s own freedom struggle remained largely unknown, unspoken and isolated?

These questions abound and more pertinent ones are raised as social media opens up spaces to cries of pain and suffering and demands for freedom and justice emanating from Indian-occupied Kashmir.

The most recent catalyst for fresh rounds of protest and louder demands is the execution of Mohammad Afzal Guru by India.

His death sentence was a monstrous miscarriage of justice and relates to an event during December 2001 when the Indian Parliament was attacked by armed persons described as “terrorists” linked to Kashmir’s freedom struggle.

Human rights activists in India from across the religious-political divide alongside social commentators have all been unsuccessful in securing Mohammad Afzal’s release. On grounds that he had been made a “scapegoat” in blemished trial concealing India’s atrocities in the occupied territories, these well-placed voices of conscience include Arundhati Roy, Indira Jaising, Sonia Jabbar, Nandita Haskar and Ashok Mitra.

If Guru’s execution has been to “satisfy” the “collective conscience of society”, these lawyers, academics, journalists and writers who have looked closely at the available facts and thus raise doubts about botched investigations and the trial itself, remain unconvinced that any piece of evidence would stand up to scrutiny.

What is clear though is that Guru has become another statistic in India’s unending war in Kashmir. His death has added another martyr to the cause for Kashmir’s freedom struggle and further polarization between the subcontinents two nuclear powers.

Guru’s death comes at a time when India’s Gujarat state evokes the horror of a state-sponsored pogrom when thirteen years ago during March 2000, two thousand Muslims were butchered. Muslim women were specially targeted. They were stripped and gang-raped before being burned alive. Arsonists burned and looted shops, homes, textile mills and mosques.

It is unfortunate that many unresolved issues six decades after independence from British Raj and the “Great Divide” resulting in partition between India and Pakistan, Kashmir remains hostage to an unjust colonial legacy giving rise to rightwing extremism constantly exploited by politicians and competing interest groups manifesting in Gujarat-type pogroms.

It is equally regrettable that despite the levels of political weaves intertwined within the leadership of SA’s Indian diaspora and the leaders of the congress movement in India had not translated into a meaningful collective campaign to redress sticky issue of Kashmir.

Whilst remaining a blind spot it must be remembered that Kashmir also possessed powerful emotional associations with some of the leaders of India and Pakistan. Nehru was a scion of a line of Kashmiri Brahmins and many leading Pakistanis who had family ties there remembered that one of the major sources of their national inspiration, Allama Iqbal was profoundly concerned with the fate of Kashmir.